In Intune’s November release, we debuted support for high-priority app update mode for Android Enterprise. The feature introduces more speed and control over the app update experience for your corporate-owned devices. As we continue to build out our app update capabilities, it’s worth summarizing the options available to you today.

The goal of this post is to provide an overview of app update features on Android Enterprise, and to help you determine which features may solve your scenarios. 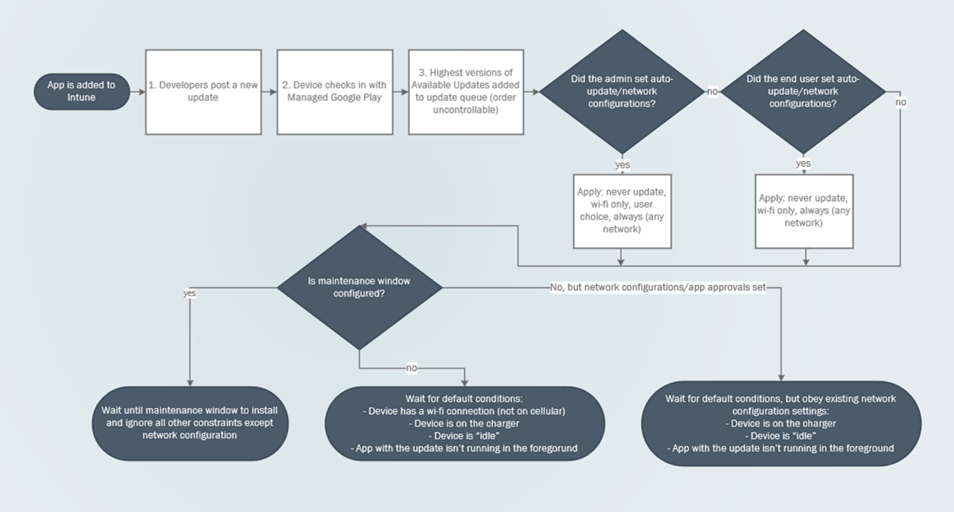 An overview of app update features without using high-priority update mode and their resulting behavior on the device.

Android devices are made aware of new app updates via the device’s instance of the Managed Google Play store. Devices sync with Managed Google Play around once per day, and there is no way today for IT admins to “force” a sync. From there, the update enters an update queue.

If no other settings are configured, the default behavior for an Android device is to wait until prerequisite conditions are met. We call this default update mode:

Upon meeting the conditions, updates are installed one by one in the order presented by the update queue. The device always installs the latest/highest version available for the device. For example, consider the following scenario:

The network preferences setting overrides the Wi-Fi requirement for default update mode. There are two versions of network configurations: the user setting and the IT admin setting.

Assuming users have access to Google Play, they are allowed the following options:

IT admins are allowed the following options. Note that the admin setting will replace the user setting, and users will not be notified that their preferences have been overridden. Admin settings are not available for personally-owned work profile devices.

How does the feature affect an app’s update speed?

It depends on the way network preferences are set.

Users can set their preference in Google Play.

From either the edit or the create workflow, you can set your auto-update network configuration under the Applications section. 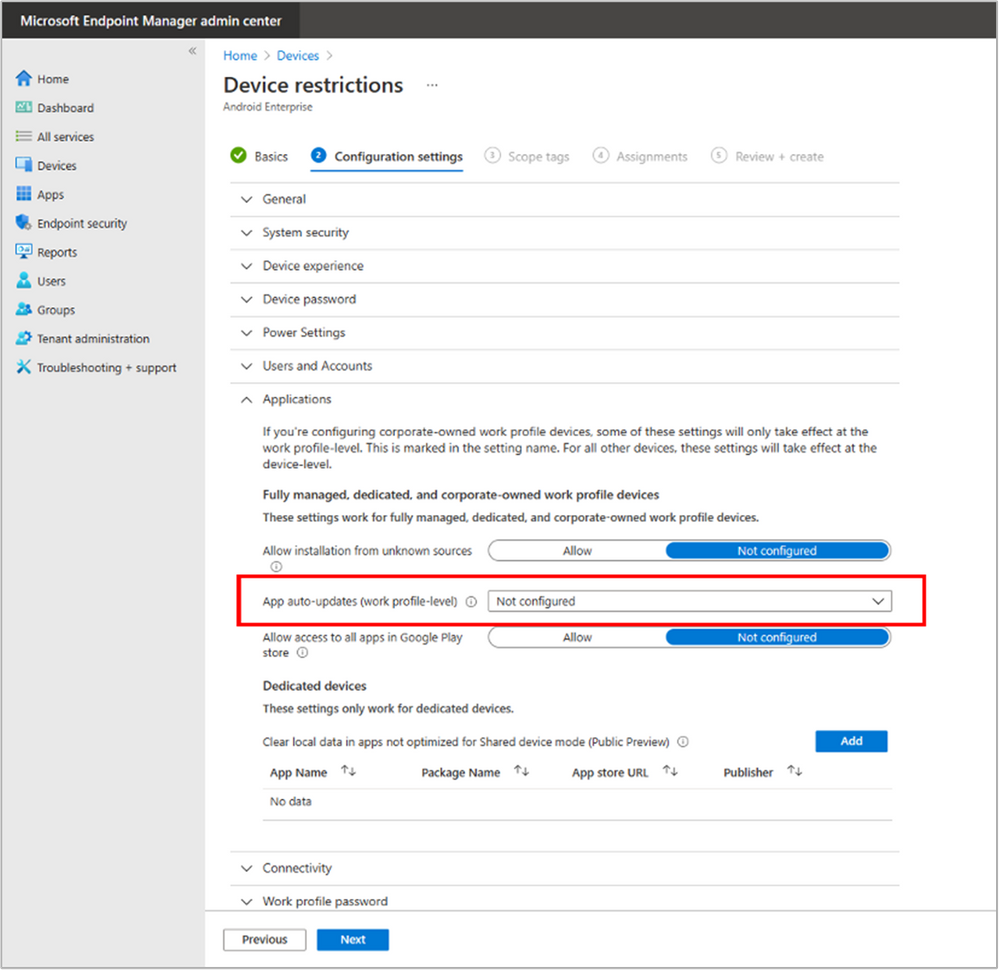 Once in a maintenance window, the device will ignore all default constraints except Wi-Fi (the Wi-Fi constraint can be modified using network configurations above). This means that the maintenance window will ignore whether the device is charging, idle, or has the updating app currently running, and it will attempt to install each update in the queue one by one. If the app is running at the time of update, it will close for the duration of the installation.

A maintenance window can be set between 0.5 and 23.5 hours per day. If an app installation doesn’t complete within the current window (the install is taking too long, not enough space on the device, not enough battery on the device, etc.) it is aborted. It will attempt to install again the next day. After 30 days, the user will be manually prompted to install the update.

Just like network configurations, IT admins can set their preference in Intune via a device restriction policy. You will find the maintenance window setting under the General section. For System update, select Maintenance window, then choose a start and end time (times are calculated based on the device’s local time). 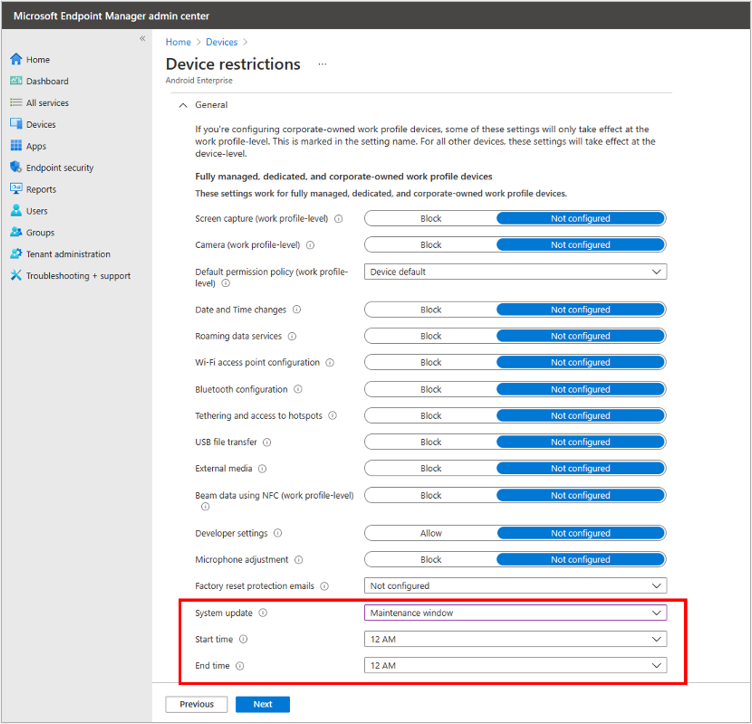 A flowchart of how high-priority update mode works.

Newly-released in November, high-priority update mode bypasses all constraints, maintenance windows, network configurations, and the check-in with Managed Google Play to apply an update to the device as fast as possible. If high-priority update mode is configured for an app, it replaces the default update mode. Once a new update is available for the device, the device is notified. Assuming the device is on and has a stable connection to either a Wi-Fi or cellular network, the installation will begin regardless of the device state or what the user is doing on the device at the time. If the app being updated is currently being used, it will close.

High-priority app update mode may be disruptive to your network and users, but it can satisfy scenarios where you’re willing to sacrifice for speed of update delivery.

Potentially as little as a few minutes. Since the device is notified immediately of an update, it doesn’t need to wait for a sync with Managed Google Play. However, if the device runs out of battery or space before the installation is complete, the update can take longer.

High-priority app update mode is set on a per-group basis. To set:

To recap, here’s a summary of the different Android Enterprise app update features supported on Intune, and when to use each of them: