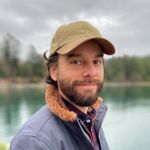 On January 28, 2021 Microsoft released its first Environmental Sustainability Report “A Year of Action” documenting progress the company made since announcing its 2020 commitments to become a carbon negative, water positive, zero waste company that protects more land than it uses by 2030. See a summary of the overall report in Part One of this blog series and learn more about the carbon negative commitment in Part Two. This third and final post will close out with a deeper look at the water positive, zero waste and ecosystems commitments, including the mysterious Planetary Computer. 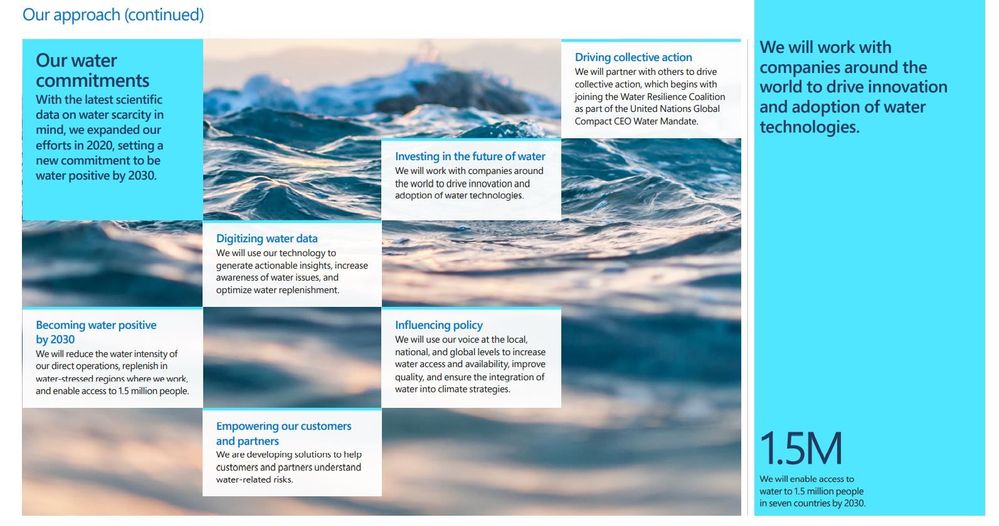 Why is a tech company like Microsoft focused on water? The UN predicts that by 2030, the world may face a 40% shortfall in available freshwater. Climate change, pollution, industrialized animal agriculture and increased demand could reduce water availability in major cities more than 66% by 2050, and as we all know from Standing Rock, "Mni Wiconi" (water is life). But it’s not just freshwater: the oceans are in trouble too. The World Economic Forum estimates that there will be more plastic waste in the oceans than fish (by weight) by 2050 unless we take drastic action to stem the tide of pollution. Microsoft spent much of 2020 laying the groundwork for improving these issues by attempting to standardize and digitize water data (where it exists at all). And true to form, Microsoft examined the unique role that technological solutions like Artificial Intelligence (AI) can provide for better water management; along the way, it increased its replenishment project portfolio by nearly 700% from fiscal year 2019.

While not as flashy or headline grabbing as carbon reduction, water commitments are no less important. There are few things that all people, and most of life on Earth require, but access to water is one of them. This issue is deeply intertwined with human rights, especially Indigenous rights. Environmental racism means that black, brown and poor people around the world will often face the worst and most immediate effects of the climate crisis: at the top of that list is lack of access to reliable, clean drinking water. Becoming water positive, while working with a growing number of partner organizations including the United Nations Water Resilience Coalition, means making progress on all these front and addressing systemic inequity while improving the underlying environment we all depend on.

“Microsoft is taking responsibility for our own water use and developing technology to help others do the same.” –  President Brad Smith 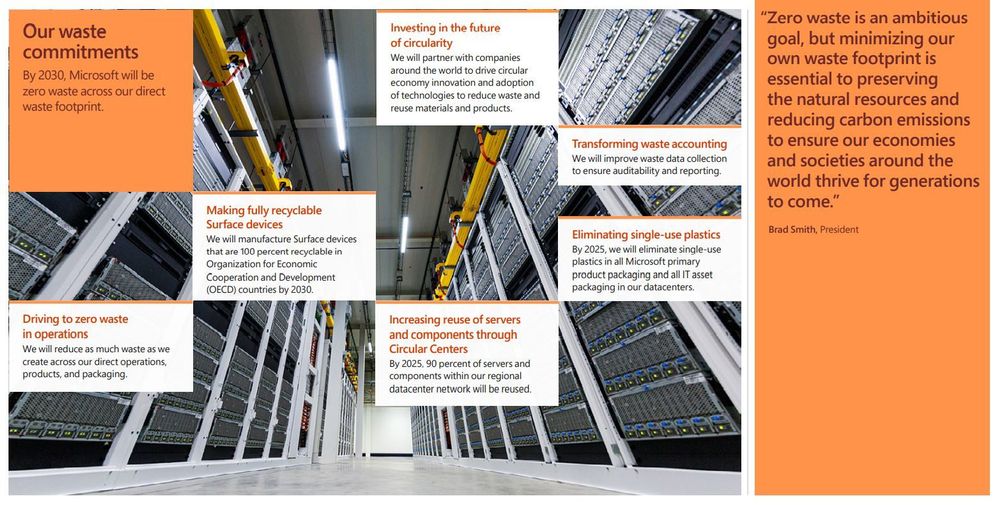 Each year, humanity creates 11 billion tons of waste including plastics, e-waste and harmful chemicals that pollute our land, clog our waterways, deplete scarce natural resources and contaminate the air we breathe. Inefficiencies associated with a wasteful society also create a lot of unnecessary carbon emissions.

Zero waste is a set of principles focused on waste prevention that encourages the redesign of resource life cycles to reduce or eliminate waste generation. The goal is for no trash to be sent to landfills, incinerators or the ocean. In practice, for most individuals and companies, 100% waste diversion or elimination is simply not achievable, so the goal is 90% diversion from landfill to achieve TRUE Zero Waste certification. Microsoft has committed to becoming a zero waste company by 2030 and will eliminate single use plastics from its packaging by 2025.

The company spent much of 2020 working to accelerate the development of a circular economy, a system in which economic activity is decoupled from the consumption of scarce resources, waste is designed out and there is an emphasis on repair, disassembly and reuse. Waste data has many of the same challenges as water data: where it exists at all, it is often fragmented, unstructured, and hard to use. Here too the company made strides in the standardization and digitization of waste data (a necessary precursor for leveraging the power of AI).

On a personal note, I was surprised and delighted to see page 54 of the report: it referenced my Plastic Free Oceans Hackathon project! A small army of Microsoft volunteers created a scalable way to automate the recognition of plastic pollution in rivers using AI, which resulted in a multi-year partnership with The Ocean Cleanup. This is one of my proudest accomplishments at Microsoft and a clear example of the role technology (and technology companies) can play in creating solutions for the world’s most pressing environmental challenges. 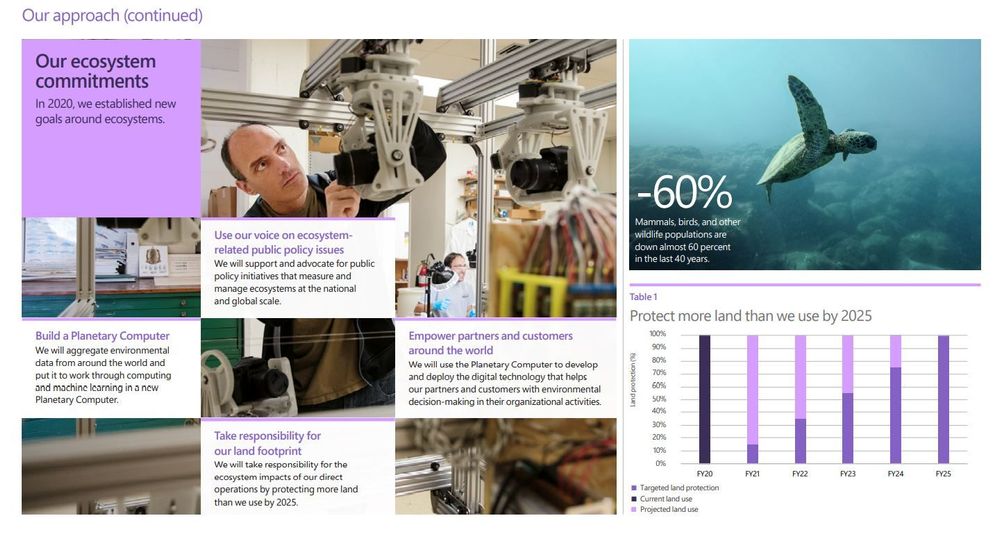 And last but certainly not least, ecosystems. This is perhaps the least obvious of the company’s four sustainability commitments: what does a tech company have to do with protecting ecosystems and biodiversity? A lot as it turns out!

We often know more about the rate of decline than we know about the overall health and wellness of a single species or the many species that comprise an ecosystem. Technologies like Artificial Intelligence and Machine Learning can help accelerate the collection and synthesis of large data sets, letting conservation researchers spend less time digging through data, and more time planning conservation with actionable insights. But why does protecting ecosystems and biodiversity matter?

Nature, and the benefits that it provides, are the foundation of our society, cultures and the global economy. We depend on healthy and intact ecosystems for clean air, water, food, medicine, energy and resources. Simply put, there is no human civilization if we continue to destroy the complex web of life that supports us. For its part, Microsoft has committed to protecting more land than it uses by 2025, putting resources and technology in the hands of scientists and nonprofits working on conservation, and curiously, developing a Planetary Computer.

Of all the things packed into the Year of Action report, none piqued my curiosity like the Planetary Computer. What is it? The report calls it “a platform that provides access to the world’s critical environmental datasets." Think of it less as some kind of enormous supercomputer and more like open-source access to very large datasets and powerful computing resources for the environmental science community. According to Microsoft Chief Environmental Officer Lucas Joppa, the end goal is an answer to the most complex environmental science question of all “how do we manage Earth΄s natural resources to ensure a climate-stable future?”

Microsoft is a technology company, so it makes sense that technology solutions are the most meaningful contribution it can make to combatting the climate crisis. The ultimate goal of the Planetary Computer is to better monitor, model and manage the world's ecosystems. But don’t take it from me, this is the brainchild of Lucas Joppa who sits at the intersection of computer and environmental science:

If we step back, zoom out and look at the moment in history we are in, it is precarious. Too many carbon emissions in our atmosphere are warming the planet and changing the climate in unpredictable and destabilizing ways, freshwater sources and oceans around the world have been degraded and filled with pollution, consumption of scarce resources continues to accelerate while waste piles up and contaminates the environment, and the living things that prop up our entire way of life, from soil microbes to whales, are going extinct faster than we can identify them.

Humans have fundamentally transformed the entire planet in just 250 years with the explosion of growth and technology ushered in by the first Industrial Revolution. But that progress has come at a cost, and we are now paying the price. Unless we drastically - and quickly - change the ways we power our civilizations, grow and transport our food , and design and consume our products, we face a climate catastrophe. But it’s not too late to make meaningful change, and while not a cure all, technology has an important role to play.

Committing to become a carbon negative, water positive, zero waste company by 2030 is remarkable. There aren’t many organizations doing this, and none the size of Microsoft. This is corporate responsibility taken to an entirely new level. But if these goals seem overly ambitious, consider that every organization on the planet will need to do the same thing, and sooner rather than later. As large as Microsoft is, it is simply too small to move the needle on any of these issues by itself. Its strategy – its moonshot – is to empower other organizations to do the same and create a wave of sustainable change across the entire economy.

At the heart of these commitments is something more: a desire to do something, anything, to avert a climate catastrophe and a willingness to bring the full resources of a trillion-dollar tech company to bear to make solutions happen faster and at a planetary scale. These commitments, and the progress made to date, are a proportional and appropriate response to what the best available science is telling us needs to happen. Let’s hope it spurs companies and governments around the world to respond in kind, because ultimately, that is what’s required to make a meaningful difference!