It is common for Exchange organizations to include different versions of Exchange. Interoperability scenarios present challenges to administrators for maintaining the different tool sets required to manage different versions of recipient and configuration objects in the organization. It is important to understand the implications of using Exchange 2010 management tools in these situations. Some of this information may change in the future.

Exchange uses a property that tags an object as "belonging" to one specific version of Exchange. The property in AD is msExchangeVersion. To quickly check the Exchange version of an object, from the Exchange Management Shell, use the "Get" cmdlet for that object type, and issue a command like the following which gets the ExchangeVersion property value for a mailbox enabled user:

In this example, the version is 14.0.100. This is the version of Exchange that was used to create this recipient object. For a management tool to be able to manage this object, it must be for version 14.0.100 or higher.

All Exchange objects are stamped with an ExchangeVersion value, and it is in this way that management tool interoperability is controlled.

The Exchange System Manager (ESM) is the primary management interface for Exchange 2003. The ESM does not have a direct interface for managing recipient objects, instead relying on the Active Directory Users and Computers (ADUC) to be installed on the same machine to expose property pages for recipient objects. The following limitations apply to management tool interoperability:

The following matrix will help to determine what can be done from each tool.

The limitations that are imposed in the EMC can be translated to limitations that also exist in EMS when using the same underlying PowerShell commands. For example, when viewing the properties for a mailbox in EMC, the Get-Mailbox command is used in the background to populate the property information. If a change is made, the Set-Mailbox command is used to make the change to the mailbox object. In some situations it may be possible to view information for an object that was created with one tool version, but not make any changes.

Organization objects are global in nature and can be managed using both versions of management tools with some specific exceptions.

Messaging Records Management features for Exchange 2010 (MRM v2) only appear under the Organization Configuration node in the Exchange 2010 EMC. MRM v1 features appear in both versions and can be managed from both tools.

Server management is very clear cut in EMC interoperability scenarios. Exchange 2007 servers do not appear in the result pane of the Exchange 2010 EMC and vice versa.

EMS commands for server configuration can be used from either version of EMS as long as the cmdlet does not depend on a specific configuration object version on the target. A message is generated and no changes are made if the cmdlet is not compatible. 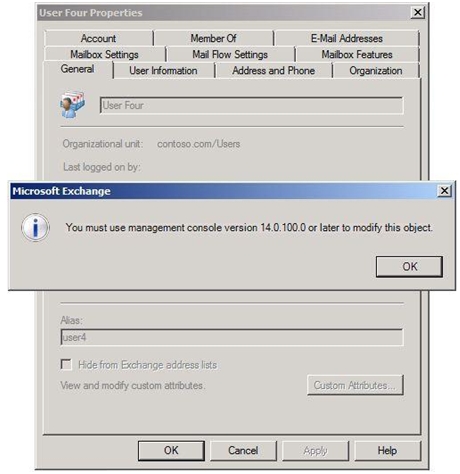 [PS] C:\>set-mailbox user2 -CustomAttribute1 "some value"
Set-Mailbox : Object is read only because it was created by a future version of Exchange: 0.10 (14.0.100.0). Current supported version is 0.1 (8.0.535.0).
At line:1 char:12
+ set-mailbox <<<< user2 -CustomAttribute1 "some value"
+ CategoryInfo : NotSpecified: (0:Int32) [Set-Mailbox], InvalidADObjectOperationException + FullyQualifiedErrorId : 855E94FC,Microsoft.Exchange.Management.RecipientTasks.SetMailbox

Using Get-Mailbox in this instance works as expected because the command only retrieves information but does not make any changes. 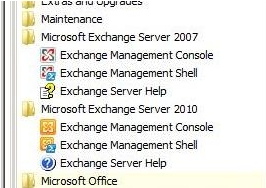 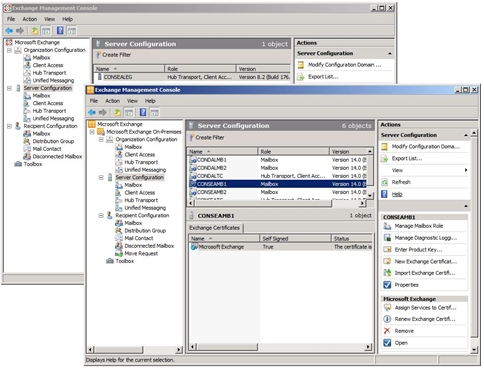 The following Windows operating systems are supported for the Exchange Management Tool role:

The prerequisites for installing Exchange 2007 and Exchange 2010 Management tools in a side-by-side deployment are: 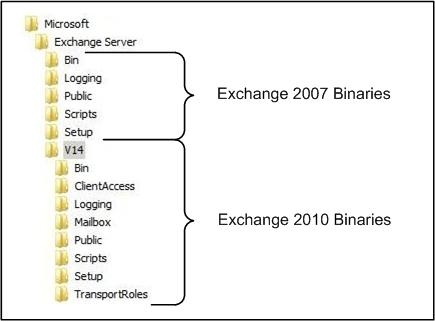