Good evening, I have a question: Pivot tables have an option called "Show values ​​as" and in turn have several categories. One of these categories is "Index". On the microsoft page they specify the index formula:

And in internet blogs they explain that this function measures the degree of import of a value in the context of the row and column where it is located and also the value of the general total. What I want to know is the mathematical underpinning of the index formula? I mean, is there any theory about it? otherwise I will consider it an unreliable formula. 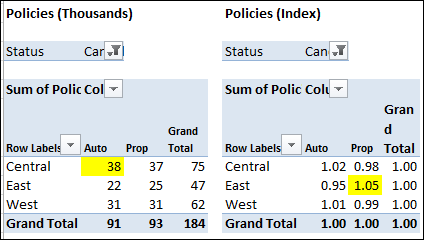 @osoto10 Perhaps the article in the link below clarifies it.

Hi Riny, thanks for sharing, but it's not the answer I'm looking for. I need to be sure that the formula is valid in the field of science. Example: to mathematically express a straight line, the equation of the straight line is used. This formula of the straight line is proven to be valid. In contrast, the index formula has no provable mathematical support. There is no information from mathematical blogs about this formula, how do I know that the index formula represents the degree of importance of a value with respect to its row, column and general total? Here is the question.
0 Likes
Reply

@osoto10
If you are not sure in built-in math you may create your own DAX measure with desired logic.

Thanks Sergei, what I need to know about the Index formula of the pivot table is to show that it is valid mathematically. Is there a theorem or mathematical law that supports this formula?
0 Likes
Reply

It can be understood in simple unitary terms. Referring to the example in the article link shared by @Riny_van_Eekelen , I've tried to distil the interpretation,

So the fraction,
Index[american bottle] = Numerator / Denominator, at global scale,

1) and 2) are direct to understand that as the "American" "bottle" sales change (increase or decrease), so does the Index, so index in a way tells about the "influence" of american bottle in overall sales.

In your own example,

31 of West-Auto is more sensitive than 31 of West-Prop, because 91 of Auto is less contributing than 93 of Prop.

If about math perhaps these links will be useful

Populate from Forms for Excel return by date and reference