UPDATE 2:  Instead of releasing build 256 since it had problems last week, we decided to release a newer build this week.  All the notes for build 256 are still below, but additions from the newer build are also added to the bottom of each list with a NEW tag.

UPDATE:  We're experiencing some trouble rolling out this week's update.  Since it's already Thursday, it's very likely we aren't going to have an update this week.  I'll update this post again when we're able to successfully release the build.

Hello insiders, it’s another big week this week!  Today we’re releasing build 78.0.262.0 to the Dev Channel.  Additionally, thanks to the release of the Beta Channel recently, we’re rolling out some big features to the Dev Channel for further testing before releasing them to Beta.  The most significant of those features is improved sync functionality with Edge mobile.  Mobile now supports syncing passwords and form fill data with the desktop version of Edge for both personal accounts as well as work and school accounts.

Some other major new functionality includes:

As always, we appreciate all your feedback and suggestions, and we want to especially thank everybody who tried out the Beta Channel!

These are awesome updates. Those of us on Canary were able to dabble with these features (like collections) before they were promoted up too Dev this week.  On a side note that where the favorites icon button on the toolbar is, it can be hidden by putting your mouse cursor over it, and right clicking than "hide from toolbar" which will hide it from your address bar, but it won't hide the actual favorites bar or ability from the drop down menu (three dots) to access favorites. To reinstate it back on the address back just click the three dots on the right side of Edge, than Favorites, than "Show favorites button in toolbar."  The added button to the address bar is a great feature, but for those that don't need it or want it (such as already having favorites as a toolbar) you can hide the button away so you have both options to keep it or hide it and/or reactive it which is good. :)

Oh and how about hiding the "folder" names in the Favorites Bar, like you all did for the other icons on the favorites bar...   And how about allowing us to choose the folder color..... Right click/choose a color....

UPDATE:  We're experiencing some trouble rolling out this week's update.  Since it's already Thursday, it's very likely we aren't going to have an update this week.  I'll update this post again when we're able to successfully release the build.

@josh_bodner, looking forward to this update, when it rolls out.  I have the following

Interesting. Mine says it is still 78.0.249.1, and I wasn't aware of it updating. BUT I now have the favourites button, which I didn't before yesterday in 78.0.249.1, and a working Share button ... which only appears to share using Microsoft Windows 10 Apps, not e.g. the email client I actually use and have set as the default email program. It's as if the update silently happened at least in part but didn't change the version number within the program.

But still no middle-click on a favourite opening it in a background tab but leaving the favourites menu (and sub-menus) open for further clicks on more favourites. (And yes I'm going to mention that in my reaction to every release until that's added to Edge, or - as with Google Chrome - you say you're not going to do it or I conclude you're not ever going to do it and I uninstall Edge.)

@josh_bodner, with the Share button will we be able to change the mail program for example as we use Outlook and not the built-in mail app as we are an O365 tenant.  Also what about Microsoft Teams as an app to share with?

XX.X.XXX.1 can usually mean a minor revision fix like a bug or crashing issue. Google does it with their Canary. You'll see something like 78.0.3896.4 and you had 4 updates of 3896 (.4) that day. You may or may not even notice the reason for it. It could be mean anything but I usually found or saw it was logged as having to do with something like a bug or crashing bug or a possibly security weakness. That it called for an update of that version right away instead of the usual next day, week, month, and so on. For example lets say Canary (or Dev) comes out at 9 AM and everyone is complaining it's crashing on launch or this feature is giving them an error and the browser is completely unstable...the developers see it and know it's a must do fix to get the browser working again today or this week...they fix it right away...maybe even twice in one hour, and released the minor updates that is now a "1." or ".2" like 78.0.2XX.2. Instead of 78.0.2XX.0. Google Canary was doing that a few days ago with their Canary that it went up too .3 (I had three updates that date...I've seen go as far as .8) within two hours and the first two updates of that day were causing hanging or crashing of the browser.

Chromium itself (not Chrome) has one build released each day. Like today it's 78.0.3897.0 but it can have up to 40 revisions of that day's build a day by different developers (Chromium doesn't have an auto-updater unless you write a script or batch file and even then it doesn't always work...so it has to be manually downloaded/installed with each new build/revision). However Chromium is the "off the trunk" version that usually will be promoted to Chrome's next day Canary version and can be buggy and unstable as heck (even throughout the day). Example being on that specific day Chromium might be at 78.0.3896.X while Chrome Canary was updated that same morning too 78.0.3897.X. (I'm not sure how Edge is doing it with their Canary such if they're working with the latest day's build of Chromium and promoting it up to their Edge or instead have their own thing going on). Google uses an autobot system that uploaded/updates the Canary browser each day.

I know. My point was that the version number of Edge Dev on my laptop never changed, including the final .1. I had Edge sitting there on the Settings>About page, refreshing it every now and then looking for the expected weekly update, but it never showed itself doing an update, and at some point the favourites address bar button and the Share menu entry appeared that were supposed to come with the update from 78.0.249.1 to 256.2, even though I never saw an update indicated and the version number remained the same after as it was before. Which is odd.

I'm not on Dev, so I'm not sure what build their on right now. Canary is pretty stable enough for me that I use that as my priority browser....if that becomes unstable (which has been almost no existent for me) I jump onto Chromium or lastly Chrome Canary and of course I still have the old Edge. That problem you mention could be a glitch or an error of updating the revised number or they simply corrected the issues at hand but kept it under the same build number. I don't know have Edge is working their uploads and build revisions. Good thing is Dev comes out once a week so whatever didn't show up or work out might (or will) in the next week version and one can always use Canary.

Edge Dev has been running, but underneath several other program windows I was actually using like Thunderbird and Firefox (which I use for normal browsing because Edge Dev doesn't keep the menu open when I middle click on favourites in favourite menus). Just brought Edge Dev to the front of the window stack, and some time since I posted before a 'Global Media Controls' button has appeared on the Address bar to the left of the Favourite button. That was NOT there earlier, but the version number still hasn't changed from what it has been for the last week. So that's at least two different silent updates that have happened today, with no indication of an update and no change in version number.

You can try uninstalling and reinstalling to see if everything that appear is still there or install on a second computer and compare. I know MS (like Google) has an auto updater. It's running in the background of your task scheduler and usually does a daily check if not hourly and it silently uploads any new updates. Maybe that can be it. Here is a picture from mine. "GoogleUpdateTaskUser" is Googles. MicrosoftEdgeTaskUpdateTaskUser is there and it describes that it does:

I believe I read online that Microsoft pulled this update since they were having issues getting the Dev Edge to update.
0 Likes
Reply 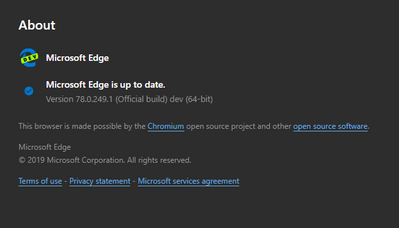 Have you already forgotten how to do it?

Developer tools was not display in local language