Hello Insiders!  Today we’re releasing build 95.0.1020.0 to the Dev channel, and since this is the fourth build from version 95, that means we’re done with 95!  Yes indeed, this is what will be moving to Beta, give or take a few small patches.

We also announced last week that your Microsoft account can now be completely passwordless, thanks in part to Edge and Authenticator working together to manage your passwords.  Read more here:  https://blogs.windows.com/windowsexperience/2021/09/15/microsoft-announces-passwordless-future-avail....

And if you’re a big PDF user, we’re happy to announce that we’ve implemented view restoring for PDFs:  https://techcommunity.microsoft.com/t5/articles/pick-up-where-you-left-off-on-microsoft-edge-pdf-rea....

As for everything else that’s new in the browser this week:

Since Beta is soon moving to version 95, that also means 94 is moving soon to Stable, so be on the lookout for that too!

Quote - "* Some users are still seeing favorites get duplicated. This issue should be reduced now that automatic deduplication has been introduced into Insider channels (...) manual deduplicator (...)"

I hope such option has a switch. I'm not fond of automatic solutions. Why?

1) I asked you once to mark one of double tabs in groups, like in Opera, Vivaldi etc. To know.

2) I cannot save one Tab group in Favorites, I can save all Tab groups only. To have a sound copy of any of the groups is to save all groups/tabs not bothering that part of them is already presented in Favorites. Do not auto/manual run deduplication and quickly export Favorites to disk. Every Tab groups can be named with date as sort of session manager.

When I use the new version to browse weibo.com, all videos on the website cannot be played, and the display "playback is terminated because the video file is damaged or the video uses a function not supported by your browser". As a result, no video can be played.
0 Likes
Reply

Is there any time line for Hardware Acceleration support for Linux?
It's available in Chromium/Chrome and yet not available in Edge (not sure why)
0 Likes
Reply

@josh_bodner this update broke Edge on Linux Plasma KDE 5 on Ubuntu 21.04 :-/. Here is what its saying, not sure about this.

At this point I am missing smooth scrolling experience. Hope you roll that out sooner.
0 Likes
Reply

@MikeKG does running a manual scan mark them?  It's possible Linux just hasn't run the scan yet.

@Nitin_Gurram it should be available, what are you seeing?  And also, what kind of system are you running on?

@jichuan I can reproduce the same thing on my device.  We've got a known issue right now where videos encoded in a certain way fail to play, and it looks like this video is encoded that way, so I'll ask what the status of the fix is.

Josh I have to plead ignorance, how do I trigger a manual scan?
0 Likes
Reply

In this version tabs hang and never load any pages. Randomly pages hangs and freezes until I crash Edge.

@mrfry700 and any others seeing crashes, we're tracking a few different crashes that made their way into this build, and already have fixes for some of them in Canary.

@josh_bodner Okay then that could be an issue, when I enter edge://settings/passwords/passwordMonitor it loads with a blank right panel. 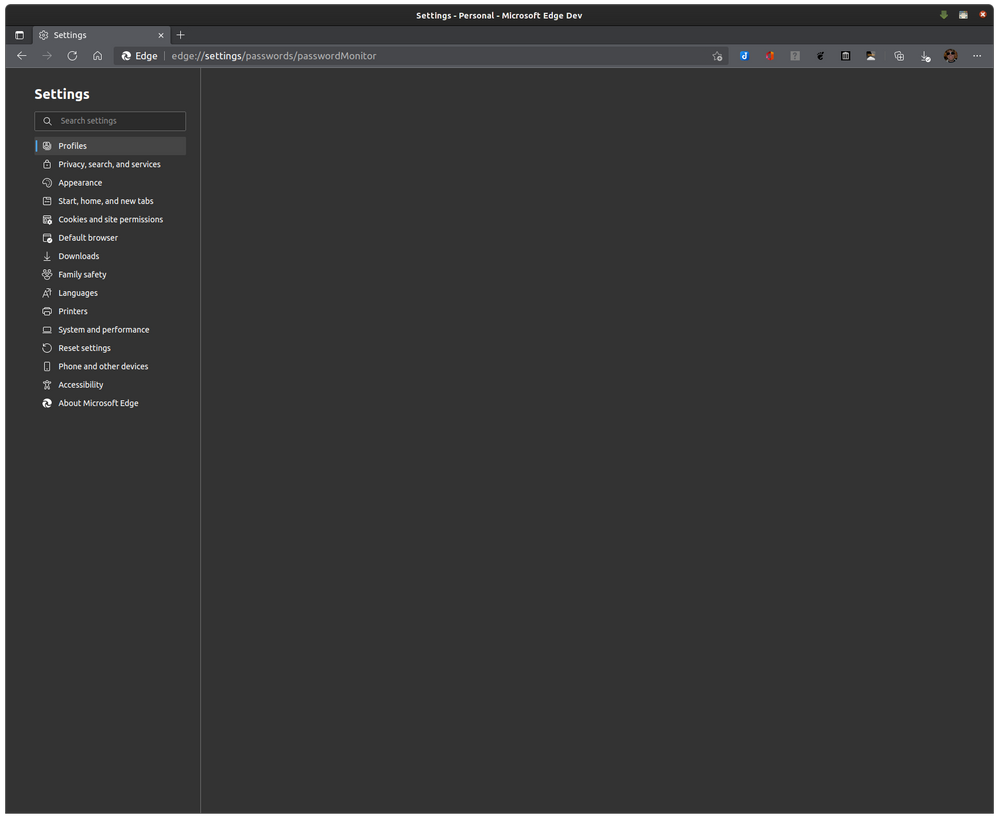 @josh_bodner Another note - I updated another of my systems (stable Gentoo) and I get the same behavior. I am not sure if this is related, but on both systems I see this in the logs when I try to load the page:

Same for me. Also crashes when opening sites pinned as apps.