As always, this is only possible thanks to your feedback!

This is all well and good. But to me the desktop and Android versions of a browser go hand in hand - I'm not going to use one when the other isn't acceptable. So when the heck are you lot going to do something about Android Edge? Google Chrome desktop AND Android are both from Chromium 84, and both betas are 85. Edge desktop standard and beta are also 84 and 85 respectively, but Android Edge beta is ... 77. SEVENTY-SEVEN. And Android chrome://flags has over 300 available flags, while Android edge//flags has ... 1. ONE! (Not that I use all the Chrome ones, just a few, but one is one without which I would find Chrome Edge unusable ... and it is NOT the one available flag in android Edge.)

At one major version release per month, that makes Android Edge 7 months behind desktop even if desktop stopped moving forward. Are you ever going to take Android Edge seriously? In the last several months the ONLY thing you've done to it is add collections ... which I don't use. You have done absolutely nothing about the issues I have with it and vital missing features. So anything you do to desktop Edge means nothing to me.

@josh_bodner When will RoamingProfileSupportEnabled actually work?  Its called out that it was added as of version 85 but it doesn't actually do anything or work, doesn't even create the Edge folder in AppData/Roaming/Microsoft.

@billroland have you seen our documentation on it?  That might help you get it working:  https://docs.microsoft.com/en-us/windows-server/storage/folder-redirection/deploy-roaming-user-profi....

@josh_bodner I've been using roaming user profiles in on-premises Active Directory domains since Windows 2000.  I know a lot of people hate them but I've always had good luck in my organization.  Anyway, it always worked fine with Internet Explorer for 20 years, it works fine with Chrome now, but with Edge it doesn't.  Even after enabling the ConfigureOnPremisesAccountAutoSignIn policy, it still wants me to sign in to the cloud for sync to work.  It really shouldn't be this complicated.

@josh_bodner When is "Warn on multiple tabs closure" coming? How is this critical functionality not important?

What does that mean by "Windows older than Windows 10"? Windows 11?

@josh_bodner It does not matter what you fix or update if this browser still lack major functionality: https://techcommunity.microsoft.com/t5/discussions/provide-run-open-save-save-as-options-when-downlo...

no [Open/Run/Save as] option when downloading files. This was critical functionality on ALL MS browsers so far and main reason most people to use MS browsers

We need a way to disable this terrible feature in Edge.

@kamfung
Dad!! I told you to stop making these jokes!

@josh_bodner
Sooo..... Is there a way to turn off those popups for the tabs?

I have been using this for about an hour, and already getting really annoyed by this functionality. Too much stuff going on in the top tab bar :(

@josh_bodner I think Edge dev is fantastic on my PCs and iOS devices. Thanks for all the hard work. I rarely if ever encounter bugs, so seeing the list of fixes and known issues was surprising. I especially like verticals tabs and collections and I'm exited to get the alt-tab experience.

@billroland I'm no policy expert, but the way I understand https://docs.microsoft.com/en-us/deployedge/microsoft-edge-policies#roamingprofilesupportenabled is that you can use it in conjunction with the SyncDisabled policy to stop the sync prompts.  For that matter, we shouldn't be that different from Chrome in this particular area, so I'm curious how different your Edge configuration is than your Chrome one at this point.

@Desmond_Kung it's still on our backlog, don't worry!  In the meantime, we've got the ability to open Edge with your tabs from the last session, as well as the ability to re-open previously closed windows from your History: 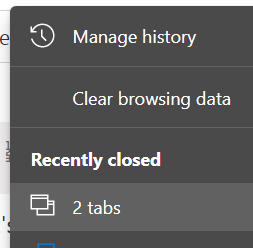 @biship sounds like a bug to me!  I know that's not the final build of Windows since we've got newer builds that we're testing internally, so I'd definitely keep an eye on it and see if the next Windows update changes anything.  And in the meantime, make sure you file a bug through our feedback tool just so the engineers on our side are aware as well.

@RobWuijster I believe the flag you'll want to disable is edge://flags/#tab-hover-cards, at least until we get a proper setting created for it.

@josh_bodner
Thanks Josh, found the flag, and am a happy camper again.
I get where these popups are coming from, but for me they're too much in my face.
Especially when you move your mouse quickly over all the tabs, it get really jumpy with sticky popups etc.
But that might be a end result of me always having a lot of tabs open ;)

We need a way to disable this terrible feature in Edge.