You can find the media autoplay blocking setting under edge://settings/content/mediaAutoplay.  While you’re in Settings, you may also want to check out some additions to Tracking Prevention.  We now offer a list of all the trackers we’ve ever blocked, as well as a page of exceptions that will allow you to better customize your Tracking Prevention behavior.

On the new tab page, there are four big new features, some of which you’ve been asking for.  First, the new tab page now supports dark theme.  Next, you can scroll through previous Bing images of the day using the arrows at the bottom left of the page.  While you’re scrolling, if you scroll down to the news feed, you’ll see that we added more personalization options.  And finally, if you don’t want to see the news feed at all, now you don’t have to, because we added the option to turn it completely off!

In addition to those features, some of the other major changes that are worth mentioning include:

We expect to have one or two minor additions to this Dev build later this week which will increase the final part of the version number, but there shouldn’t be any new features added in those updates.  And until next week, thank you all for using Edge and for sending us all your feedback and suggestions!

Sounds great, keep up the good work! Can't wait to use (stable) edge at my office as well.

I just updated and I'm still seeing the issue where some websites (such as the New tab page) are really zoomed out, please see here for screenshot comparison https://techcommunity.microsoft.com/t5/Discussions/webpages-seem-zoomed-out-in-Dev-version-79/m-p/88...
0 Likes
Reply

Has anyone ever had any successful experience where autoplay blocking actually blocks a video or media from being played automatically?

I've tested it on Many websites (set to block) and had no luck so far.
https://techcommunity.microsoft.com/t5/Discussions/Autoplay-blocking-does-Not-work-on-YouTube/m-p/88...
4 Likes
Reply

The lack of those 3 core features undermines the usability of quick links quite a lot, as I (and many others) tend to use them for a curated list of very frequently visited sites. This serves a different purpose than the bookmarks bar and menus, but is very difficult to make good use of so far in Edge:

I do realize Edge is not pursuing customization at any cost in the sense that say, Vivaldi does - but I don't think there's a need for advanced features here like tile folders, custom icons or anything like that - just a solid, core feature set that makes the New Tab tiles actually usable rather than just keeping them for the sake of feature parity.

For what it's worth, Chrome has been terrible at this for a long time as well (recently starting to get a bit better) - whereas Firefox, Vivaldi and Opera have always handled the New Tab tiles in a very useful manner.

Thank you for your time!

When will implement acrilic effect as current edge? :thinking_face:
1 Like
Reply

@HotCakeX Yes, I have also tested this feature since it first appeared a month ago, and there are two pages where it works perfectly, CNN and Fox news (at least in my case), I know that many of you don't frequent those pages (neither do I, but they serve to demonstrate that this feature works).

Set the option to "Block", open two new tabs and copy and paste these links:

It seems that it doesn't work if you right click on the links and select the option "Open link in new tab", that's why it's important to open new tabs and copy and paste the links.

It still doesn't work on the most popular sites like YouTube, but I guess that will come later.

The color change of the aura tooltips is not mentioned in the changelog, but, in my opinion, it's something to highlight.

@josh_bodner Now that's a changelog! Great to see many bugs, a few I experienced, finally getting the whack.

Already sent a smiley, but a quick QOL feature: could we get a comma separator on this "trackers blocked" page? I think it'll be easier to read & understand how insane tracking has become.

Is Microsoft going to incorporate a stronger ad blocker in upcoming builds? If not, then this is an unusually titled item "Ads - block / allow" under Site Permissions.

When this is enabled, a tiny fraction of ads are blocked for normal users. This Setting toggle has gotta be renamed to "Intrusive ads" (and someone at MS should define "intrusive" so users know what this setting actually does), if more ad blocking isn't coming. 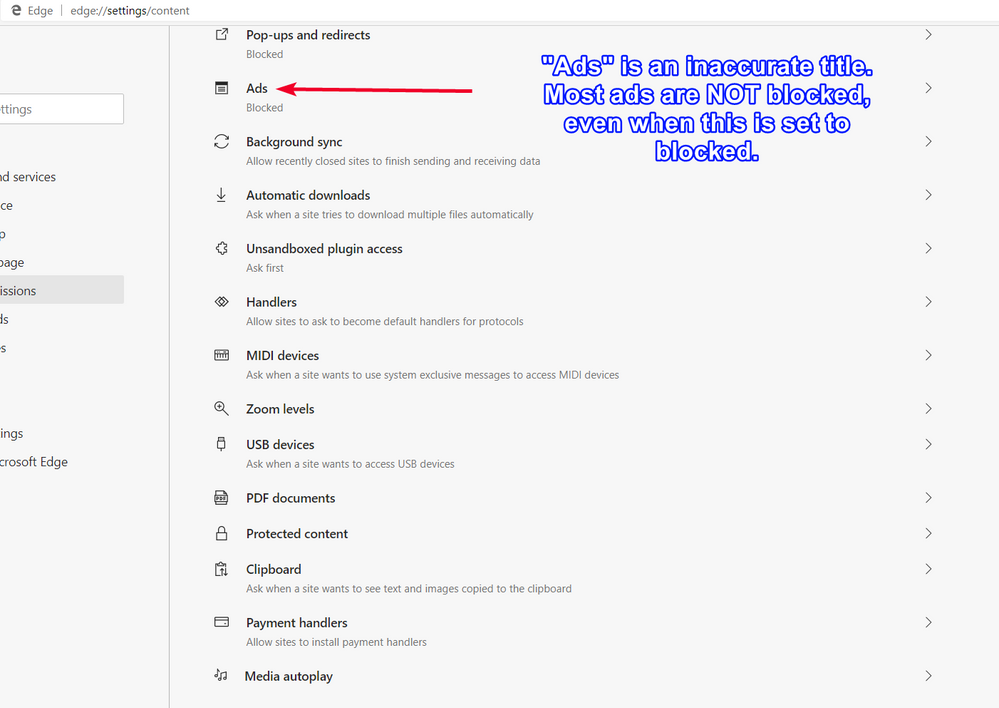 Absolutely love the new Office 365 integration with the New Tab! Most amazing feature I didn't know I needed... :)

@Derek Gabriel What do you mean?

Great! Now only thing remaining is to remove rounded corners around tab and In-Private indicator.

@josh_bodner Mouse wheel scrolling, at least in Windows 10, is still broken from the previous build. I would like to know if this is planned to stay this way so I can move on and use a different browser. Thanks.

Please, explain "broken". I do not nor ever have had any wheel scrolling issues in any Channel; seems same as ever, anywhere/everywhere.  Please, describe "broken".  Thanks very much.  Oh & for me, this applies to both 18990 & 18362.

still seeing an issue where favorites in the favorites bar that have been moved, are back where they were moved from.

To be helpful to everyone;
The correct path for autoplay options is: Settings>site permissions>Media autoplay (Bottom of the list) & hit its arrow at the right to see the 3 choices available, Allow/Limit/Block.

Its hard to grasp the shape of corners being a make-or-break issue.

Where is completely turn off News Feeds?  All I seem to, still, have is Always or On Scroll