Databases are essential workers in nearly all applications. They form the bedrock of a data architecture—handling transactions, record-keeping, data manipulation, and other crucial tasks on which modern apps rely. But for as long as databases have existed, people have looked for ways to speed them up. With databases so central to data architecture, even small reductions in throughput or latency performance can cause ripple effects that make the rest of the application sluggish and create a disappointing user experience. And there are financial repercussions too—one study found that the probability of a web site visitor bouncing rose by 90% if the page load time increased from one second to five seconds. This problem will likely become even more pronounced as web and mobile traffic increase. The solution isn’t always simple—scaling up databases can be expensive, and may not solve throughput or latency issues.

One way you can improve the performance of your data architecture is by implementing caching. In common setups like a cache-aside architecture, the most used data is stored in a fast and easy-to-access cache. When a user requests data, the cache is checked first before querying a database. 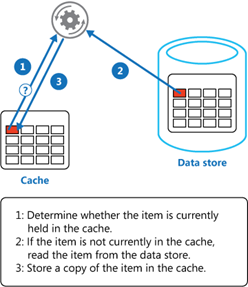 Combined with a relational database, a cache can store the most common database queries and return these queries much faster than the database when the application requests them. Not only can this result in significant reductions in latency, but it also reduces the load on the database, lowering the need to overprovision. Additionally, caches are typically better than databases at handling a high throughput of requests—enabling the application to handle more simultaneous users.

Caches are typically most beneficial for read-heavy workloads where the same data is being accessed again and again. Caching pricing, inventory, session state, or financial data are some examples of common use-cases. It’s important to note that caching won’t speed up operations internal to a database (like joins). Instead, caching lessens the need for those operations to occur by returning the results of a query before it reaches the database.

Redis is one of the most popular caching solutions in the market. It is a key-value datastore that runs in-memory, rather than on disk like most databases. Running in-memory makes it lightning-fast, and a terrific complement to more deliberate and consistent primary databases like Azure SQL Database or PostgreSQL. Redis is available as a fully-managed service on Azure through Azure Cache for Redis, offering automatic patching and updates, high-availability deployment options, and the latest Redis features. Azure Cache for Redis can neatly plug into your Azure data infrastructure as a cache, allowing you to boost data performance. But by how much? We decided to put it to the test.

To measure the performance boost from using Redis in conjunction with a database, we turned to GigaOm to run benchmarks on the performance of Azure SQL Database with and without caching. Azure SQL Database is a good point of reference—it’s a highly advanced and full-featured database that is heavily utilized by the most demanding customers. While it already has great price-performance, adding Redis can help accelerate that performance from great to outstanding. To measure this, GigaOm created a sample application based on a real-world example: users viewing inventory on an e-commerce site and placing items into their shopping cart. This test was designed to be realistic while also featuring the benefits of caching. It was run twice: once with just Azure SQL Database handling the inventory and shopping cart data, and once with Azure SQL Database plus Azure Cache for Redis.

Azure App Service was used to host the sample application, and JMeter was used to provide simulated traffic. For each test, additional simultaneous users were periodically added until the database or cache returned errors. GigaOm looked at two performance metrics: throughput and latency.

Throughput Performance Increased by over 800%

Throughput is a measurement of how much traffic the application can handle simultaneously. High throughput capability is essential to businesses that handle a lot of users or data—especially if demand tends to spike periodically. Azure Cache for Redis can handle millions of simultaneous requests with virtually no slowdown, making it highly suited for enhancing throughput performance. The test results showed this clearly: 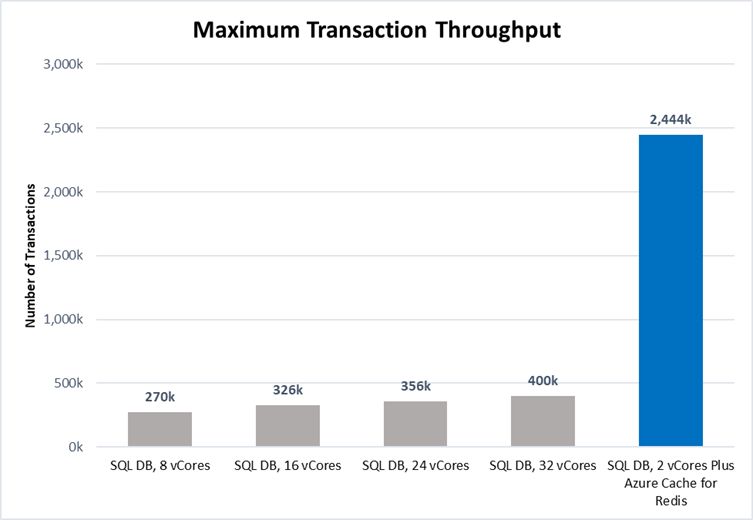 Scaling up Azure SQL Database from 8 vCores to 32 vCores produced a 50% increase in throughput performance. While this is useful, adding additional vCores has limited impact on IOPS performance which was the bottleneck factor here. Adding a cache was even more effective: maximum throughput was over 800% higher with Azure Cache for Redis, even when using a smaller database instance (2 vCores vs 8 vCores). That means more users, higher scalability, and better peak traffic performance—all without changing the core database infrastructure. Plus, scaling throughput with Azure Cache for Redis is typically much cheaper than scaling up the database.

Latency Performance Improved by Over 1000%

Latency measures the time duration between when a request for data is sent by the application and received from the database. The lower the latency, the snappier the user experience and the faster data is returned. Azure Cache for Redis is particularly effective at operating with low latency because it runs in-memory. The benchmarking demonstrated this strongly: 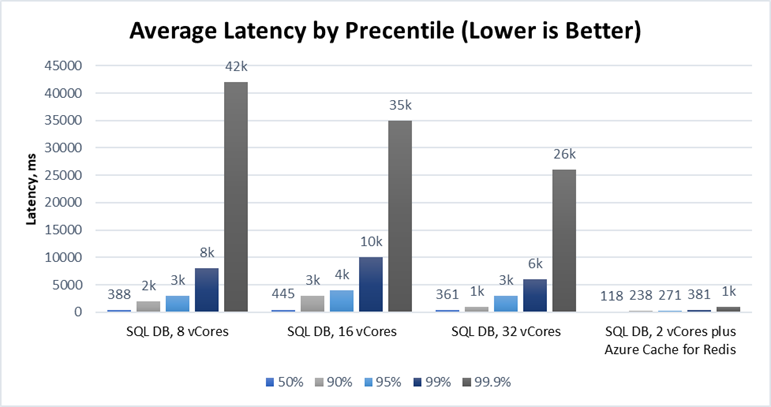 Latency is typically measured at the 95th percentile level or above because delays tend to stack up. This is the “drive-thru” effect. If an order in front of you takes ten minutes, you do not care if your order takes only a few seconds—you had to wait for their order to be completed first! In our test, adding Azure Cache for Redis decreased the 95th percentile latency from over 3s down to 271ms—over a 1000% improvement. At the 99th and 99.9th percentile levels, the difference was even greater. Lower latency means faster applications and happier users, and Azure Cache for Redis is a great way for you to achieve the latency you need.

Azure SQL Database is already a great database with excellent price-performance. Coupled with Azure Cache for Redis, this price-performance edge is amplified even further with a powerful solution for accelerating the throughput and latency performance of your database. Even better, Azure Cache for Redis fits into your existing data architecture and can often be bolted on without requiring huge application changes. Read the full benchmarking report, explore our free online training, and access our documentation to learn more.