Network beaconing is generally described as network traffic originating from victim`s network towards adversary controlled infrastructure that occurs at regular intervals which could be an indication of malware infection or compromised host doing data exfiltration.  This article will discuss the use case of detecting network beaconing via intra-request time delta patterns using KQL (Kusto query language) in Azure Sentinel.  The logic or technique of the use-case was originally discussed at threat hunting project here and also blogged with the open source network analytics tool (flare) implementation by huntoperator here.  Implementing this technique natively using KQL allows defenders to quickly apply it over multiple network data sources and easily set up alerts within Azure Sentinel.

The diagram below outlines the various stages in compiling this detection and associated KQL operators underneath each stage. 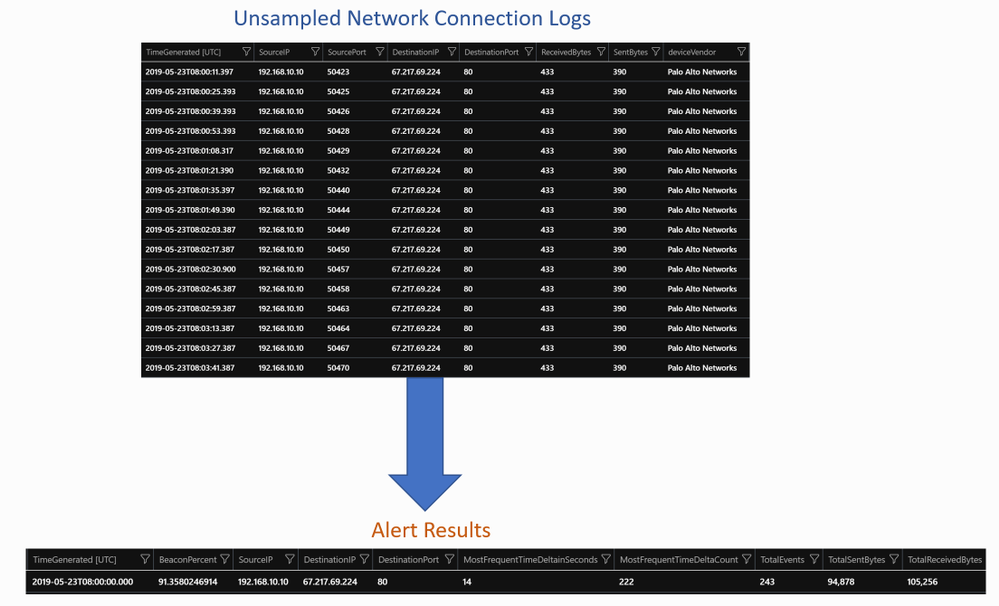 In this stage, we will select the data source which will have unsampled or non-aggregated raw logs. The data source can be network firewall, proxy logs etc. Below section of  the query refers to selecting the data source (in this example- Palo Alto Firewall) and loading the relevant data.

This step involves filtering the raw logs loaded in the first stage to only focus on traffic directing from internal networks to external Public networks. This is achieved by populating IP Type as Private and Public based on PrivateIP regex. You can use any other data sources such as joining against internal asset inventory data source with matches as Internal and rest as external.

This step is used to reorder the logs using serialize operator. It is required to reorder the data in correct order as we will calculate time delta from sequential events for the same source addresses.

This step is used to calculate time delta using prev() and next() functions. In order to use these functions, the data should be in correct order achieved from Step-3. The timestamp of the next event is accessed using next function and later datetime_diff() is used to calculate time difference between two timestamps. It is made sure that source IP address of the next event is same. The unit used is in seconds. Final output is projected with selected columns along with data transfer in bytes.

In this step, data resulted from step 4 is further aggregated to downsample the data per hour time window without losing the context. First, In addition to using sum() and count() functions to aggregate, make_list() is used to make array of Time Delta values which are grouped by sourceip, destinationip and destinationports. Later, This array of values is transformed into count of each values to find most frequent or repetitive timedelta value using arg_max() function.  At the end, BeaconPercent is calculated using simple formula : count of most frequent time delta divided by total events.

At various stages of the query, filtering is used to reduce the input data set in scope. At the top of the query, we have several global arguments declared which can be tweaked for alerting.

In this case, we will start hunting with unsampled or non-aggregated network connection logs from any network sensor logs. The logs should include at least sourceport and destinationPort along with source and destination address fields.

Below is an example output of Palo Alto traffic logs from Azure Sentinel. 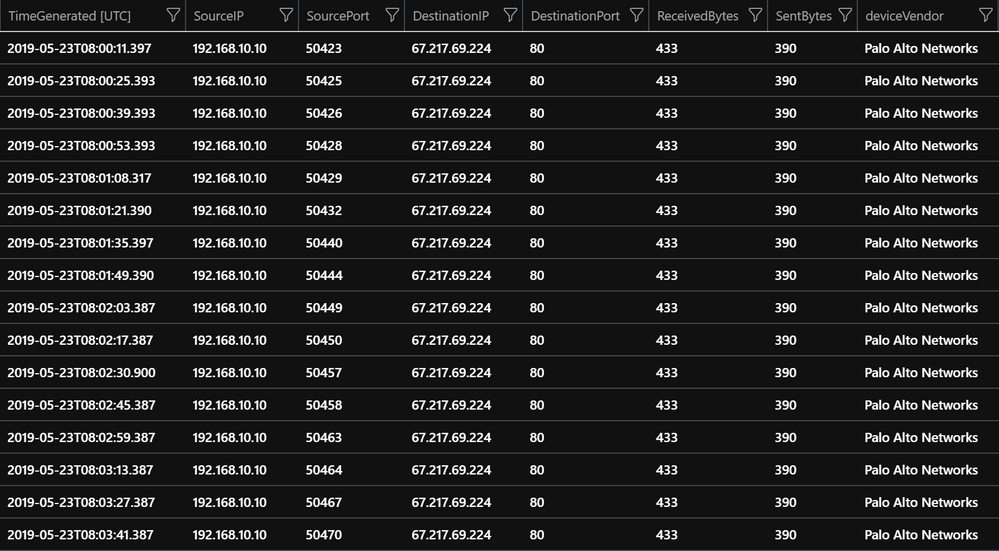 After executing the query and based on the globally configured threshold, alerts will be triggered. Example alert results will look like below.

Apart from the known fields from the original logs such as TimeGenerated, SourceIP, DestinationIP, DestinationPort, TotalEvents,TotalSentBytes,TotalReceivedBytes, below additional enriched fields are populated by query.

Whois query for the IP reveals, it is registered with LogmeIn. This could be benign behavior if you are using the application in your environments, else this could be indication of unauthorized installation on compromised host. Similar ways, you could detect other legitimate or unauthorized applications usage exhibiting beaconing behaviors. 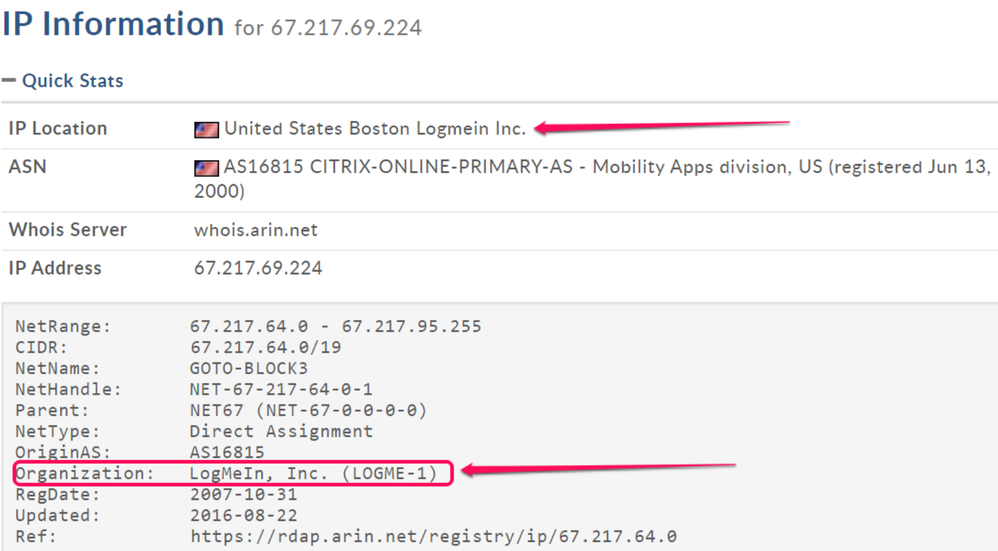 Things to remember before onboarding this detection:

In this article, we looked into previously discussed technique of detecting beaconing using intra-time delta patterns and how it can be implemented using native KQL within Azure Sentinel. The logic of the detection involves various stages starting from loading raw logs to doing various data transformation and finally alerting the results based on globally configured threshold values.

Unsampled/ non-aggregated network connection logs are very voluminous in nature and finding actionable events are always challenging.  Even if you follow traditional approaches such as matching with IOCs, application or service profiling, various type of visualizations , due to the sheer scale of the data ,results from such techniques are not often directly actionable for analysts and need further ways to hunt for malicious traffic. With this unique analysis technique, we can find beacon like traffic patterns from your internal networks towards untrusted public destinations and directly investigate the results. The output alert results also provide useful context on the type of network traffic seen with basic packet statistics and why it has categorized as beaconing with additional attributes such as amount of data transferred to assist analysts to do alert triage.

From the example covered in the article, we were able to detect logmein traffic which was exhibiting beaconing behavior based on the repetitive time delta patterns in the given hour. We also talked about the scenarios where detection should not be onboarded depending on how environment is setup or data ingestion is set up.

Special thanks to Microsoft Kusto Discussions community who assisted with Data Reshaping stage of the query. You can also ask questions related to KQL at stackoverflow here.

So I can't think of a single reason why I'd beacon on a consistent time basis,  I can't imagine anything in  c2 network is time sensitive, so just fire things randomly.

Thanks @Tony Roth for reviewing detection and leaving the comment. Beaconing often happens at regular intervals although c2 networks/frameworks can change and add randomness to communication pattern, it is still good idea to monitor periodic communication from internal hosts to unknown public addresses.

Some approaches were suggested to reduce false positives or filter the benign traffic such as tweaking timedelta/ percent beacon threshold, profiling network and segregating known destination IP ranges/registrant org. If you have any generic tuning recommendation, we would gladly accept via Pull Request to the sentinel repo.

Yes,  I get that monitoring this is valuable but I somewhat think that the malware authors are on to this now.  I know its a game of cat and mouse so every bit helps.