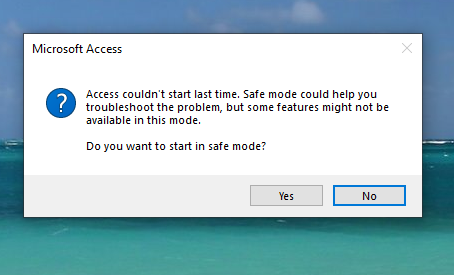 I am having the following errors when trying to open Access. I had the Office Level2 Support uninstall and reinstall Office. They also updated my Operating system and installed all updates.

We can't diagnose the problems in your computer's Operating System on the basis of two messages, sorry. The best we might do is take some educated guesses for you to follow up on.

First, though, this "Office Level2 Support " you mention. Did you contact MICROSOFT for this support? And this was a MICROSOFT employee who did this on your computer? I am always cautious about such things because, alas, there are scammers out there waiting to exploit people in distress. So, just to be sure, YOU called MICROSOFT, right?

The fact that there is a problem in the Windows registry points to something like conflicting versions of Office having been installed on this computer as one possible source of the problem. Did you install two or more different versions, such as Office 2013 and Office 365, or some other combination? Did you try to install both 32 bit and 64 bit versions of Office side-by-side? Anything like that?

Again, without being able to examine the computer directly, diagnosis requires as much detail from yu as possible about the environment and what has been done with it.

Thank you for the response.

I was getting 5 different versions of the first message and not matter whether I pressed yes or no, the second message box appeared.

Yes I did contact Microsoft Support. The Level 1 support removed a previous version of office and the current version of office and then reinstalled the office product Office 365 personal. This did not fix the problem and after trying some registry edits and another reinstall, no luck. He then escalated my issue to a Level 2 Office Support Specialist. He spent two hours uninstalling with some code and updating my operating system. This did not solve the problem. They told me that was as all the support they had and referred me to this site with no follow up information to access it. The original Level 1 Support Tech followed up on my incident, provided me the link to this site and walked me through what to post.  I have since learned they did not remove everything from either office version from my system. By some trial and error I have learned over 30 years of computing ( I could write a long narrative of all the steps if you wish), I finally got the right version of the software on my system and now it seems to work.

Boy, that was adventure.

First, congratulations on resolving the problem. It sounds like you got a bit of a run-around, unfortunately, and then the hand-off. But your own perseverance and experience did the trick.

Second, I'm going to refer this discussion to my MS contacts. It's doubtful they will be able to do much themselves, but I want someone to know how things go here sometimes. Maybe there will be a follow-up, maybe not.

I was able to resolve the issue by deleting all other version folders of Office from C:\Program Files(x86)\Microsoft Office\ and leaving only the Office16 folder.

Despite only having Office 365 and no other versions of Office installed on this machine (ever), I did have the following other applications installed:

Once I removed all these applications and their folders using the Microsoft Office Removal Tool (and manually uninstalling Stellar Repair for Access), I reinstalled Microsoft Office using the same files my organization uses via SCCM deployment per the question above, and I was able to open Microsoft Access (and existing .accdb files) again.

I've since reinstalled the four applications above (which recreated Office14 and Office15 folders), and can still open Access without encountering the issue. There must have been something in one of these 'earlier version' folders causing the confusion.
0 Likes
Reply

That definitely sounds like the generational conflicts overwhelmed Windows ability to keep things sorted out. Thanks for the follow up.
0 Likes
Reply