Turn on suggestions
Auto-suggest helps you quickly narrow down your search results by suggesting possible matches as you type.
Showing results for
Show  only  | Search instead for
Did you mean:
Windows 11 cumulative update improvements: an overview
By

Windows 11 has a redesigned cumulative update approach with better fundamentals to help users install the latest security and quality updates faster and more reliably. This includes a ~40% size reduction in the cumulative update package size, which means there is less to download for end users and commercial organizations alike! Let's take a closer look.

To explain, let’s go back to Windows 10, version 1809. In that release, we introduced significant changes in how we package a cumulative update. Specifically, we introduced a model where reverse and forward differentials can be combined to create a smaller cumulative update package compared to the previous express technology. For the full details on reverse and forward differentials, and the model introduced in Windows 10, version 1809, see Windows Updates using forward and reverse differentials. I’ll briefly summarize the main points.

In this new model for version 1809, the cumulative update is comprised of forward and reverse differentials for each file. 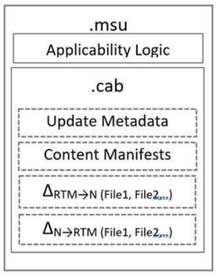 For the first cumulative update after RTM is installed, the forward differentials are used to bring a base version of a file (i.e., the RTM version) forward to the target revision.

This new cumulative update model resulted in an order of magnitude less content to host compared to the express model, with similar download size. Not only less content for Microsoft to host on our content delivery network, but less content for commercial organizations to transmit and store in their distribution points.

The size reduction applies to all channels that the cumulative update is acquired from, including catalog.update.microsoft.com, Windows Update, Windows Update for Business, Windows Server Update Services, and Dynamic Update. Smaller size means download time is reduced. We also spend less time expanding the package on the client. We also are saving another 2-3 minutes on the client by pre-compressing the package manifests when the package is built, instead of at runtime. This means less CPU usage, and thus less battery usage.

For more information on the technology that enabled the removal of reverse differentials, see Jonathon Ready’s excellent blog entitled How Microsoft reduced Windows 11 update size by 40%.

It is for this reason we revisited the spirit of Express updates and ask if we could bring the benefits of Express into the Windows 11 cumulative update.

With Windows 11, we’ve structured the cumulative update to enable the client to request only those files that have changed. This allows the device’s servicing stack to request only differentials needed. Why is this significant? For those devices that are current, they will download and process fewer differentials than a device that is one or more months behind on quality and security updates.

In February 2021, the latest cumulative update and servicing stack update was combined and distributed in Windows Server Update Services (WSUS), and the Microsoft Update Catalog as a new cumulative update. Why? Based on feedback, we provided a combined cumulative update package to provide a more seamless experience for those managing monthly updates on-premises. For more information, see Aria Carley’s blog Deploy Windows SSUs and LCUs together with one cumulative update.

With Windows 11, we’ve evolved the combined cumulative update to harness the same Unified Update Platform (UUP) that is used today with Windows Update and Windows Update for Business. Why? The technology to combine these updates is portable to Windows devices that pre-date the Unified Update Platform and, thus, a lightweight technology was introduced to make backporting lighter. With Windows 11, all devices have the client-side UUP technology present. We also evolved the orchestration of the servicing stack and the cumulative update to use the same orchestration engine we’ve been using for Windows Update managed devices.

Orchestration benefits that ship as part of Windows Update now will automatically be integrated with combined cumulative update that is distributed as an MSU file via catalog.update.microsoft.com. This orchestration engine is called the UUP update agent. It is a common, shared technology with UUP, is extensible in the future for other servicing packages, and is more reliable. Also, it is shipped within the update payload itself! By moving the Windows 11 orchestration to be UUP based, we reduce the likelihood of breaking changes and their impact to overall ecosystem. Why? We have more flexibility to make changes under the hood given most logic is in the UUP update agent that gets downloaded with the update.

Let’s take a short peek at the changes, and what this may mean for your workflows. The tables below show a simple breakout of what the combined cumulative update MSUs look like when expanded.

What this may mean for you:

In general, don’t crack open and use the individual files within the MSU. Why? The format may evolve as we continue to innovate on improving cumulative update fundamentals.

Windows is localized in 110 languages. For Windows 10, this breaks down into 38 languages packaged as language packs, and 72 languages packaged as Local Experience Packs, or LXPs. This split in technologies is important to understand, as the combined cumulative update in both Windows 10 and Windows 11 services the translations within the 38 language packs but doesn’t service LXPs. Instead, these LXPs are published and acquired from the Microsoft Store.

Although updated LXPs are regularly published to Microsoft Store, an LXP ISO is usually created for each semi-annual Windows version release (e.g., Windows 10, version 2004). If or when a combined cumulative update contains contract-breaking string updates, for example, in a semi-annual Windows feature update using the servicing stack, languages that were provisioned using LXPs experience either resource fallback and/or broken translations. When this happens, the device can recover when connected to the network, and connecting to the Microsoft Store. For those building or maintaining an OS image, for offline image updating, DISM tool can be used to apply an LCU-matching LXP to the image.

Starting in Windows 11, language packs have been expanded from 38 to 43, with the addition of Catalan (ca-ES), Basque (eu-ES), Galician (gl-ES), Indonesian (id-ID) and Vietnamese (vi-VN). Why? With these additional 5 language packs, > 99% of Windows language usage is covered, and thus can be serviced via the combined cumulative update. These five new language packs can be used for imaging. The remaining 67 languages are still supported as LXPs, published and available via the Microsoft Store, and available within Windows Settings.

Given the points above on language packs and servicing, I want to briefly discuss changes in Windows 11 regarding how language packs and features on demand (FODs) ship as part of the supplemental release media. Some refer to this as the language and FOD ISOs.

Starting in Windows 11, the language and FOD ISO has been merged, making it easier to add each to your OS image. You don’t need a custom repository. Instead, just mount the merged language and optional feature (LOF) ISO and use it as a source with DISM /add-capability. When you add a language using DISM /add-package, and use the mounted LOF ISO as a source, Windows will automatically add the additional FOD satellites as needed for those FODs already installed. For more information, see Features On Demand and Add languages to Windows images.

Windows 11 is the next era of Windows, designed to bring users closer to what they love. It has a redesigned user interface, a new Microsoft Store, incredible gaming experience, Teams integration, and widgets to connect users to the people and information you care about.

What’s next? We continue to support and work on investment on fundamentals, i.e., smaller, faster, more reliable, and simpler updates!

If you have questions, contact me on Tech Community, or at the next edition of Windows Office Hours!