In recent blogs by John Cable and myself, we shared how Windows 10, version 1909 (referred to internally as 19H2) will continue our efforts to improve the overall update experience for consumers and businesses. In this post, we are sharing more detail about the mechanics that will be used to provide those improvements.

Before we describe what’s new, however, we want to clarify that if a device is running any version of Windows 10 earlier than version 1903, the process of updating to version 1909 will be the same as previous feature updates. This applies to devices managed with Windows Update or Windows Update for Business, or devices self-managed with Windows Server Update Services (WSUS), Configuration Manager, or other management tool. Again, for devices running Windows 10, version 1809 and previous, there is nothing new with the update process to version 1909.

For devices managed by Windows Update

If you receive updates directly from Windows Update, the Windows 10, version 1909 update will be presented just like any feature update. The installation process will be faster, but, as with any feature update, you will have the ability to choose when to install version 1909 using the controls that we announced earlier this year.

Can I install this on my Surface Book 2?

Couldn't have said it better myself, arrived to work today to an absolute sh** show ! Bah humbug

Yes, you can install it on any Windows 10 machine.  I myself am a Surface Book 2 user and have been running it for months.

contact me @johnwilc@microsoft.com and I'll make sure you get assistance.

So the latest monthly quality update for Windows 10, version 1903 (released October 8, 2019); which includes the new features in Windows 10, version 1909 which are currently in a dormant/disabled state will remain so, for example for the full Windows 10 Pro 1903 support lifecycle (Dec. 8, 2020) unless the KB referred to is installed? We can continue to defer feature updates while still receiving quality updates? Feature updates are being moved from March, September releases to December, June as I understand but the frequency will remain the same as indicated?

1903 will have 18 month servicing lifecycle,  during which it will receive quality updates.

1909 will have 30 months, for Enterprise and Education SKUs.

you did not say how your device is being managed, but its covered above.  You mentioned "deferred" so you may be WuFB managed. If so, we adhere to your WuFB deferral settings.

This is what you want 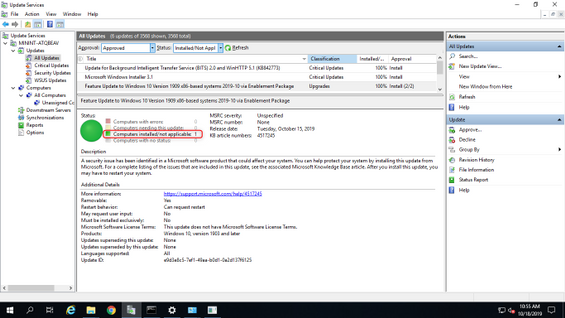 Can you show me in the SCCM Console under the "Software Library > All Software Updates " node please?

If that is not possible can you show me how to download the KB4517245 patch offline please?

@denco-86 @Eric Sabo Please make sure you have the “Windows 10, version 1903 and later” product and “Upgrades” classification selected in your Software Update Point site component. Both the enablement package, for devices on 1903, and normal feature update, for devices on earlier Windows 10 releases, should show in the “Windows 10 Servicing” \ “All Windows 10 Updates” node, not the “All Software Updates” node as these are feature upgrades. Also note that you can’t search “KB4517245” as it’s not in the title, search just “4517245” or "enablement"

Thanks that helped a lot - we were looking under All Software Updates.    Thanks again

download gets stuck at the above  for hours, tried restarting didn't work, any suggestions besides deleting the update?

What are you upgrading from?

How are you updating? WU, WuFB, WSUS?

Single restart huh? I just ran 1909 update (pressed Download and install now link on Updates page in Settings) on a fully updated 1903 laptop. It downloaded and presented Restart now button. I pressed it. It rebooted, showed usual updates installing view with percents and then rebooted again and then booted into Windows desktop (autologon enabled). So, not exactly one restart :) At least in my case. Some cheap ASUS laptop.

glnz
Occasional Contributor
My existing PC is dual-boot Win 7 Pro 64-bit and Win 10 Pro 64-bit (now at version 1903). A Dell Optiplex 7010 with Intel Core i5 3470, plenty of hard drive storage and 16GB RAM. So far, updates to each OS have NOT affected the other, as far as I can tell. Is there anything different about doing the new update of the Win 10 side to version 1909 that might affect the Win 7 side and the current, working dual-booting? Thanks.
1 Like
Like

In corporate environment (W10 Enterprise, Windows Update for Business, deployment rings...) is it possible to make this feature update mandatory, just like the previous ones ? Most of our users do not want to deal with updates and were ok with existing installation options (especially when restart is as fast as this one).

Should not be a problem.  The servicing pipelines are separate, and the update process in this case, same as monthly, you have been using for sometime now with now issues.

Tried to move test machine with 1909 version to WSUS server on Windows Server 2016 and it still reports 18362.449 (2 instead of 3). I guess will have to wait for OS hosting WSUS patch to fix reporting?

Not sure if this is right forum, however:

Downloading newly released Danish Window 10 Enterprise 1909, from VLSC, I believe either the Install.wim is wrongly numbered, or the files are backlevel!

"Because of the common baseline, even after installing Windows 10, version 1909, individual system file versions will still appear as 18362."

@Oleg K The build shows in the client operating system as 18363 so surely this should be reported to WSUS/SCCM as the correct build? Even a CU affects the build number

@polaris CU updates the number after the dot and this is a CU number, not a build number, which is first 5 digits. In my case CU digits are reported correctly, but not the build digits. I'm guessing WSUS is maybe identifying OS by some system file, which hasn't changed in 1909. But it does show CU number correctly, so maybe not it.

Hi, we have freshly installed 1903 machines in fr-ca with OSD with the October cumulative update installed. The enablement Package has been deployed (available) to those machines, but they don't show up in software center)

Are we missing something? We're on CB 1902 with the hotfix.

Thks in advance and don't hesitate if you have any questions.

@Stephane Lalancette do your clients have the prerequisite 1903 cumulative and servicing stack updates installed?

If you have the prerequisites installed, what does the state of the enablement package update report as for the clients in deployment monitoring?

So, WSUS admins have no reliable source of information about a real version of Windows 10? It seems that smaller feature updates have their own problem now. Or we should just approve them and hope they install without checking (no Needed shown at least) :)

And please note that I'm refering to the Install.wim, not individual files.

I appears MS managed to make a total mess out of this, that everyone now has to spend numerous hours to Work around - total Waste of everyones time. MS please call in some proffesionals….

ajc196
Senior Member
"You can verify that the Windows 10, version 1909 update was successful by running Winver, versioning APIs, WMI, and other common interfaces, and verifying that the operating system build number is 18363. Because of the common baseline, even after installing Windows 10, version 1909, individual system file versions will still appear as 18362." Any chance of that not being the case eventually? For one example, 1909 machines report to WSUS as 18362, and that pretty much blows all the reporting I pulled from WSUS out of the water... Seems very half-baked.
1 Like
Like

@AceTech30 you can install in on your surface, the only update block that I've seen is this

I wish it was tested internally on real hardware with Microsoft's test group (if any still left?) before public release so things like that could have been identified.

Please, where will I find the enhancement package to it on.

@Kwaw210 by "enhancement package", are you referring to the standalone cumulative update for 1909? if yes then here you can find it:

p.s all links are officially downloaded from Microsoft servers

How is your device being managed, getting updated today?  Via Windows Update, or managed locally from WSUS?  Both are covered above in the blog, both Windows Update managed and Self Managed.

Updated to 1909 on my HP Elitebook and now Skype for Business and Teams apps both fail to login.   This is a corporate environment so a bit challenging when these stop working.  I can still access Teams via browser so very odd that just the app got broken.

And @Half_Penny , that sounds like what we started experiencing recently.  You can fix it by attempting to log-in with a non-existent user like Arbdargardawal@yourcompany.com and then when it fails to login, the user cache will be cleared and it will let you log in again with your proper credentials.  Re-installing Teams also seems to work, but this is faster.

When we began the rollout of 1909, we tested it on our Technology Department computers before installing to any other machines in the School District. We had various "strange" issues. A couple of machines were simply like we has performed a complete reinstall of the OS. We had to install all apps. We had to install printers. We had to setup the machines like they were fresh out of the box. One machine had to have Office reinstalled. Needless to say, none of the test machines were right. All had something wrong with them. But as long as 3 days later, some of the machines corrected themselves and were OK again??? I hope the next version of Windows 10 doesn't come with so many "strange" quirks.

Herrie_B
New Contributor
Just a quetion because it has been puzzling me for weeks now. I have a multi-bnoot machine on which I run 2 versions of Windows 10 (Both Dutch) -1: Windows 10 Pro N (the one I most frequently use) -2: Windows 10 Pro (regular, non N) Strangely enough the "November 2019 Update" ran flawlessly on the the 'Non N' version contrary to the N version, which does download the files, installs up till almost 100% but never really finishes. Could the difference between "N" and non N explain this? Can I do something to get it running Or is it a matter of your programmers, who perhaps did not realise the differences between the 2 versions? I had an equal problem installing the previous update. I am keen on reactions
0 Likes
Like

I realised that the "N" (and "K") versions are installed without the Media Features pack.

After some searching I found this link to install it.

After installing this, I ran the '1903' update, flawlessly and continued to the latest 'November' 1909.

It ran smooth as once would expect.