In many business networks, downloading apps and updates can be slow, inefficient, and, in many markets, expensive. When speaking with our customers, we often hear that they have regional facilities in limited and/or metered markets where devices download the same content, redundantly impacting coveted bandwidth and, ultimately, the organization’s financial bottom line. In almost any network, Delivery Optimization can be a highly effective tool, efficiently delivering content to devices and reducing the need for more internet bandwidth.

This post outlines some potential scenarios that your organization might be required to accommodate, and the options you have when configuring Delivery Optimization to help you manage bandwidth. While these scenarios may not align strictly to real-life scenarios, this case study of Microsoft’s use of Delivery Optimization provides deeper insight into using peer-to-peer update distribution on a large scale.

Imagine an organization that resides on a single floor of a skyscraper in a large city. They have two VLANs configured, one for the wired desktops used by developers, and another for their servers, including some build servers. The workstations run Windows 10 Enterprise, and the build servers run Windows Server. Every device is connected to the organization’s Active Directory domain. Each workstation also has multiple Office 365 applications installed, and some developers have downloaded the Ubuntu app from the Microsoft Store, which is over 200 MB in size.

Since the workstations and servers are running and connected to power almost all the time, the IT administrator believes that the devices would benefit from caching chunks of their downloads for a long period of time so that new devices joining the network can download almost everything locally, including new Windows and Office updates, drivers, and common applications like the Ubuntu app. Devices will only download missing chunks of data from the internet (from an HTTP source) when those portions of the data aren’t available from other devices on the network. The administrator configures devices to cache parts of downloaded apps and updates for a maximum of 7 days, instead of the default, which is up to 72 hours. 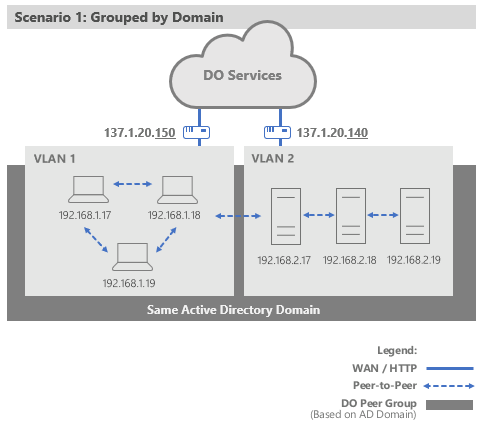 Since the servers reside on a different VLAN, by grouping devices by domain rather than using the default LAN download mode (which only groups devices behind the same NAT), the servers can be included in peer downloads and uploads across VLANs. The administrator could have also configured the office as an Active Directory site, and grouped devices by AD site instead.

The IT department issues each developer a high-end laptop, also running Windows 10 Enterprise, that has the latest wireless network technology and a large amount of storage. Worried about Delivery Optimization not being as effective since Delivery Optimization is not used while mobile devices are running on battery, the IT administrator configures Delivery Optimization to upload content to other devices when the battery percentage of a device is above 60%. The administrator also disables the Peer-to-Peer option for all servers, thereby freeing them up for higher demand tasks and storage. Since there is a high volume of laptops with plenty of storage, content is cached across many devices and there are almost always some peers available.

Since the new laptops come with large internal hard drives, very little space is being used on each device, so the IT administrator believes that there is space available for smaller and less commonly downloaded content. The administrator configures Delivery Optimization to be enabled for downloads over 10 MB in size, instead of the 50 MB default, to include other small apps that are commonly downloaded by users, such as Microsoft Remote Desktop. The Delivery Optimization cloud service then recommends which content needs more peer sources so that the devices can prioritize what to cache.

To accommodate an increasing number of developers in its user base, the organization opens another office in another city, this time with multiple subnets for each floor of the building. The IT department connects the networks for both office buildings and shares a single public IP address between the offices, but, as the bandwidth between offices is limited and expensive, they do not want Delivery Optimization to attempt to share content between locations, even though the devices in both locations are on the same domain and have the same external IP address. 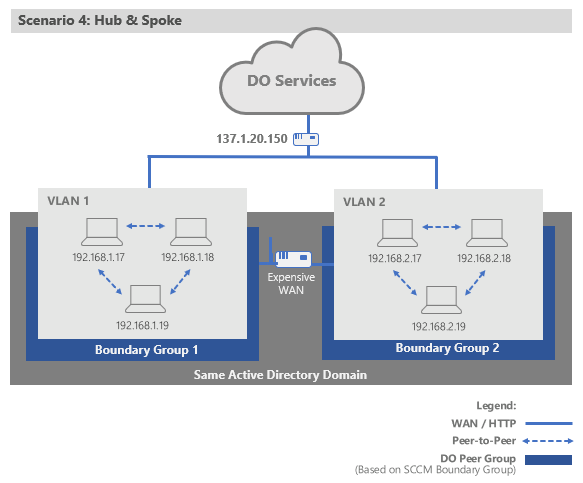 In this scenario of a hub-and-spoke network topology, grouping devices as peers within boundary groups provides a more accurate and dynamic method of customizing the groups. When a device roams between office locations, it will join the boundary group assigned by that location and adopt the correct Delivery Optimization peer group.

While fictional scenarios can describe a variety of situations, it is important to understand how well Delivery Optimization can work in real businesses, such as here at Microsoft. Our tens of thousands of co-managed devices were able to download the internal pre-release of the latest feature update mostly from peers, and we achieved about 69% peer usage. For all co-managed devices at Microsoft, downloaded chunks are cached for 7 days and our IT department monitors the results via Delivery Optimization analytics.

To learn how we use Delivery Optimization at Microsoft, see this case study from IT Showcase.

We hope these example scenarios and the real-world example from Microsoft provide insight into how Delivery Optimization can improve the efficiency of Office, application, and operating system updates across your network.

Looking for support? Visit the Windows 10 IT pro forums.