I have a problem with my xbox (one) controller. The controller doesn't connect via bluetooth to my computer and the with cable my computer doesn't recognise it ( Xbox accessories App). when I go to the device manager I can see this ( look at the picture below sorry my computer is in french).
I tried cleaning my computer from junk files, deleting the drivers and reinstalling them, nothing.
When I try to link the controller with my computer with bluetooth my computer says the exact same thing as this post :
https://techcommunity.microsoft.com/t5/report-an-issue/xbox-controller-driver-error-when-connecting-...
The controller works just fine with my phone, so the problem lies with my OS which is windows 11.

Thank you for helping me !

I have exactly the same issue. When will get that fixed? 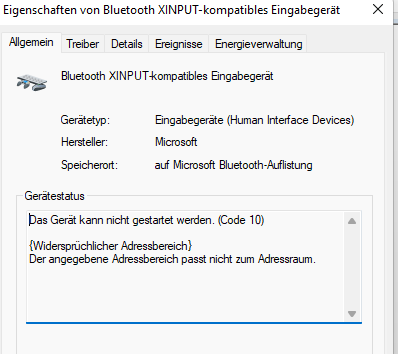 Personally it’s fixed now I don’t know how though. I bought a wire controller from a store played with it for about a week the. Suddenly wanted to try out the Xbox controller and it worked nicely. After that I decided to not have a windows update ever again on windows 11 until they fix all the major problems
0 Likes
Reply

For some reason, it works for me today. I just started my pc this afternoon and the driver got installed, very strange.