So does thos mean we have to either switch to Dev channel or wait over 6 month to get the fix regaring color management on multiple display settings ?

It's good to see atleast the multi-display issue has been solved, but the issue I originally reported still exists in the latest Beta channel build, from what I can tell. Although, the little fix I posted earlier works as well.

From one of the recent official blog posts related to W11, it seems there's been under-the-hood changes to display colour profiles for implementing some HDR and colour depth related stuff. I'm pretty sure this is why the old profiles aren't working as intended, maybe this will be fixed with the W11 launch version. It's also possible that graphics vendors like AMD and nVidia may fix the issue when they release compatible drivers for W11.

Either way, once I got rid of the existing colour profiles, I didn't run into any issues. I used my display's native control panel to change some settings I wanted to change.

@michaelravier Nah, I think the fix may be in the release candidate build that's coming up soon.

I tested the current Preview release and it does fix the issue.

I don't think it's related to selected color profiles however, as changing color profils does not fix it for me. Colors are handled fine in Windows and most apps. It's only some apps that don't inherit the colors properly.

I don't think its related to graphic drivers either as I have two graphic cards (Intel and Nvidia) with the same results.

Hopefully it will get fixed before launch but I was under the impression the current preview release would be the official one on the 5th.

The current Preview release has other issues that are fixed by the Dev one as well. For instance the "killer control center" for wifi has issues with prioritizing content : Teams videocalls and Youtube get throttled and lag constantly. It took me days to find out where this came from and disabling this feature solved the issue. But before that, simply moving the the Dev preview also fixed this issue.

So for the only two bugs I found, the Dev channel seems actually more stable and polished than the pre-release version.

Maybe the Dev build will soon move to beta and we will be able to get it.

Wow knew I should have stuck with Windows 10, My desktop White looks washed out and like a cool off white in Windows 10 I did not have this issue.

1080p looks absolutely terrible on my Sony 55" 4K TV icons are a blurry mess when I go native icons are clear but screen looks washed out, Making my eyes strain terribly.

I had the DPI fix tool running for Windows 10 which was fine but when I installed Windows 11 it was also fine until I changed the colours in personalisation settings and now it won't go back no matter what I try.

I don't know what's wrong with the light profile in Windows 11 but it's a wash out for me.

@sanjupanikkar I'm using the release version (21H2 / 22000.194) and I have the same issue. All the applications that I use are using sRGB as my display's profile instead of the specific one that I installed. The correct GPU gamma curves are being loaded, though. I'm using XnViewMP, Photoshop and Firefox for this testing. The display profile is being installed with DisplayCal. I didn't have any issue with Windows 10. I'm uploading two pictures where you can see XnViewMP thinks system's display profile is "sRGB", even when a custom profile is installed. 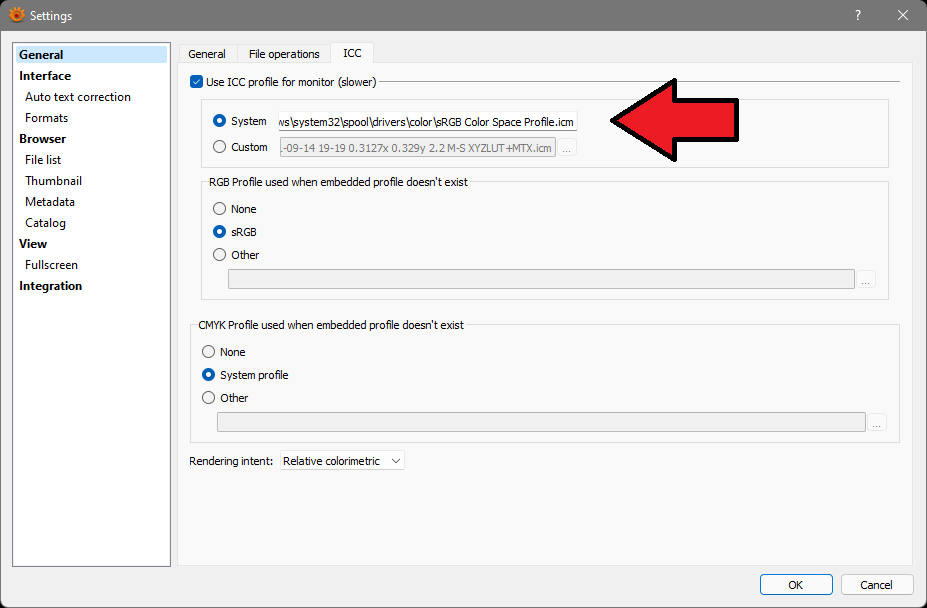 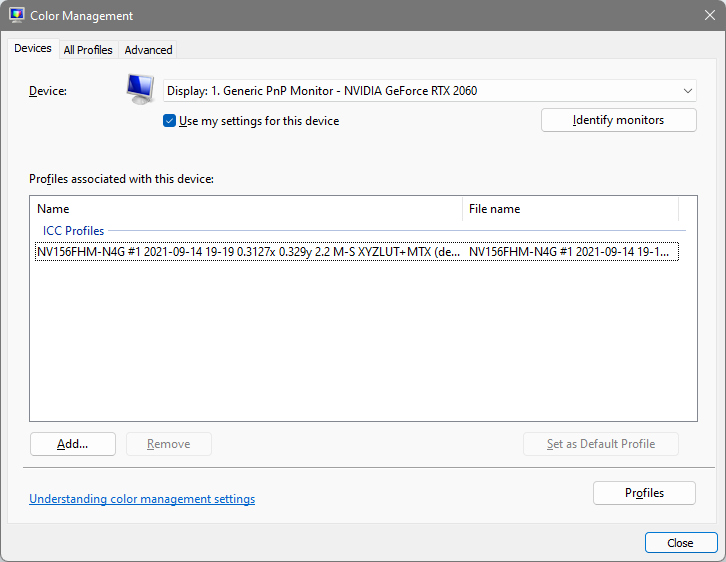 I have found a workaround for this issue: open "Color Management", go to the "Advanced" tab and, in "Device profile", choose your monitor's device profile (it should be on the list if your color profile is already installed). After doing this, all your color-managed software will use the device profile again. 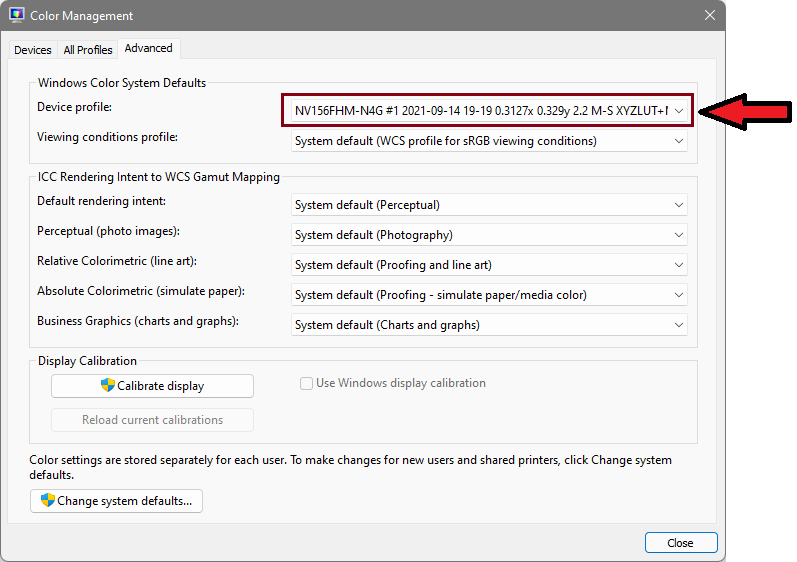 This has been fixed in the latest Windows update "January 25, 2022—KB5008353 (OS Build 22000.469)". After installing the update, I undid the "workaround" that I were using and I reinstalled the color profile (in my case, I did this from DisplayCAL, since it's the software that I used to create the color profile). Everything is working as expected now. I can't believe it took almost 4 months for Microsoft to fix the color management. But at least it's finally working.
0 Likes
Reply