I don't have a fix, but I have the same problem. I can calibrate my display with a 3080Ti, which then looks good. I reboot it uses the default color profile even though it says its using the profile I created. It isn't. I can delete the color profile and it looks the same.
0 Likes
Reply

It looks like there are no user solutions for these specific issues. They have to be fixed by Microsoft, hopefully by the time Windows 11 is officially released.
0 Likes
Reply

@sanjupanikkarI'm having the same issues. =(

Hi again everyone,
I noticed that this issue also affects the colours in video games and movies as well making them look washed out.

However, the good news is that there is a way to fix the issue (atleast for now). It turns out the issue is actually caused by graphics drivers for Windows 11 and not by Windows 11 itself.

Thanks man! I'll give it a try and report.
0 Likes
Reply

Well, it works fine until I click the configuration button in Windows. It reset to default colours. If I don't click anything in the config it works fine
0 Likes
Reply

I'm not sure what configuration you're referring to. Are you talking about the Colour Management settings?
0 Likes
Reply

No. The configuration button on Windows (settings).
0 Likes
Reply

@reusbruno That's very strange. I'm not sure if this is related to the same issue but maybe you can try manually selecting a default display color profile in Color Management panel? Maybe it'll prevent it from being reset. 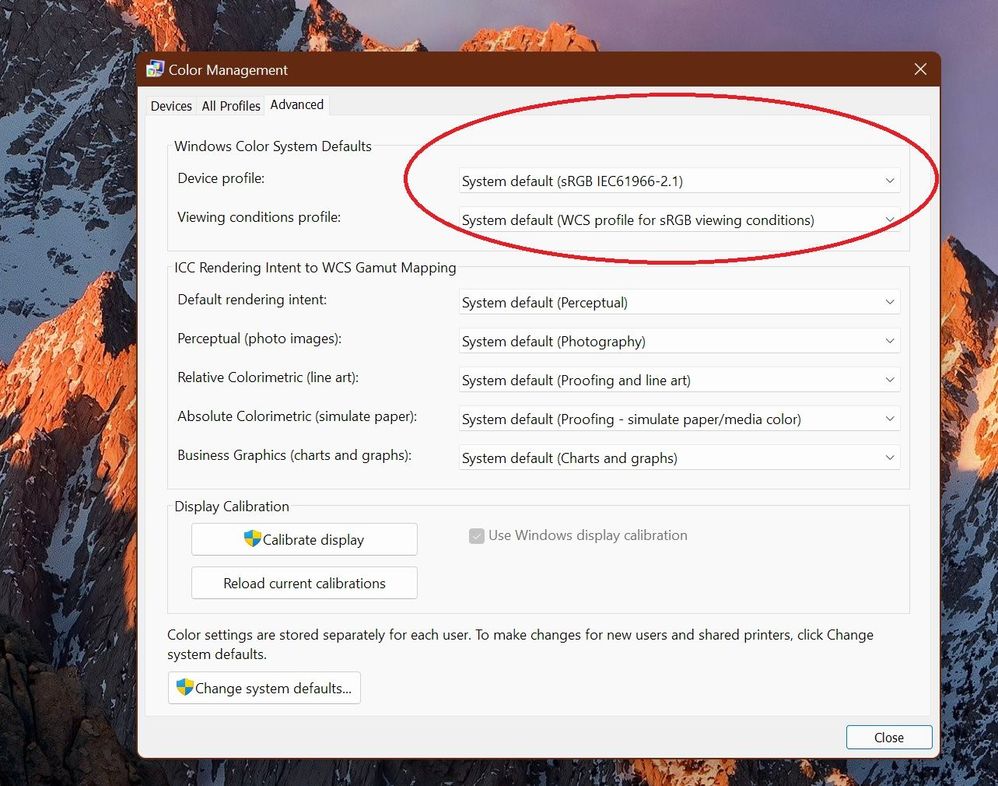 @sanjupanikkar Same here.
I should point out that Windows itself handles color profiles just fine.

When I open a jpeg on both screens with Window's built in preview program, I looks just fine.

But many other apps do look dull on the secondary screen.

That is the case for all the browsers I tested (Chrome, Edge Chromium, Firefox).

Chrome has a flag that allows to force a color profil, which fixes the issue for the seconday screen, but then everything looks oversaturated on the primary screen (which is high gamut).

These worked fin on Windows 10.

Question is : who needs to update ?

Anyone has some info about an upcoming fix ?

To be fair, this is not the final version so we assumed the risk by installing it.
Not sure of any incoming fixes. For the moment I have led to default icc and deleted the calibrated one.
0 Likes
Reply

Agreed. But that only works if you have one display, or several of the same kinds.
No doubt this will get fixed... I'm just surprised that this does not get mentioned anywhere. I tried to write a feedback to Microsoft but I couldn't find the form in the insider program.

True that. I couldn't find it anywhere as well. Please, let us know if you find anything. I'll do the same.
0 Likes
Reply

I've sent a Feedback. Not sure I did it right (I couldn't select the OS version anywhere).
But here it is.
Maybe you can upvote it to give it a boost.
https://aka.ms/AAdjwyt
0 Likes
Reply

Can't open the link for some reason.
0 Likes
Reply

I think you need to install the "Feedback Hub" app from the Microsoft Store.
0 Likes
Reply

that won't get you anywhere. somebody has been fiddling with color profiles, run the GPO of that policy reset. all these profiles that even are added to .JPEG images, as if we are too stupid to see how micohashes are recognizers in this universe. What would happen if some parser or eval of that gets OOB hehehehe FB
0 Likes
Reply

Has anyone tested 22449 on the dev channel ?
Changelog mentions this :
"Addressed an issue that was making certain applications sometimes get the wrong color profile in multi-monitor scenarios."
0 Likes
Reply