I'm having problems with rolling back from Dev (25115) to Beta

I'm having problems with rolling back from Dev (25115) to Beta

Today I made a mistake installing the Dev Insider Build of Windows 11 and I'd like to know if I have those 10 days to rollback to beta. I'm asking because even if I linked my Microsoft account to the Windows Insider Program settings page, the option for switching from Dev to Beta it's blocked. Am I missing something or am I doomed to the Dev build till the next Beta release? Thank you all.

Hi, unfortunately  -> because you have installed the Dev version. it is possible to lower the channel only after performing a clean installation of Windows! 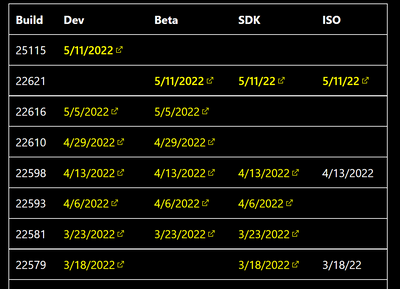 2 days earlier it was possible - Microsoft announced it.

Lowering the Dev channel. - to Beta without a clean installation of Windows - is available!!! - Micr...

I'm thinking about throwing myself off a plane after this. I have about 500 GB of software and music production work I can't move from this hardware for technical reasons. Hope they'll make the switch available again soon.
0 Likes
Reply

I understand, but because many people were surprised that Dev. and Beta are the same - there were problems and rather Microsoft will not repeat it for a long time.
.
0 Likes
Reply

This is only possible if you have a system backup. If not you are not able to as it is on Dev channel
0 Likes
Reply

See if this note from official announcement helps you anyway: