Turn on suggestions
Auto-suggest helps you quickly narrow down your search results by suggesting possible matches as you type.
Showing results for
Show  only  | Search instead for
Did you mean:
Introducing the new Performance Monitor for Windows
By

As the administrator of Windows computers and servers, you deserve the best tools to understand how features, apps, and devices are working. When you need to troubleshoot why something is slow or broken, there’s no source of truth more trusty or versatile than Windows performance counters.

The classic user interface for perf counters, Performance Monitor or perfmon.exe, hasn’t changed much since it was added to Windows in 1993. (That’s right – over 25 years ago!) It’s difficult to learn and time-consuming to use. It could be way, way better.

Today, we’re beyond excited to introduce a reimagined Performance Monitor:

The new Performance Monitor tool is available today in Preview as part of Windows Admin Center version 1910, which you can download here. It runs in your default browser, doesn’t depend on any other software or services, and works with all recent versions of Windows Server and Windows 10.

The first thing you’ll notice is the modern look and feel: the app layout is less cluttered, the fonts and icons are crisp and clear, and the colors are vibrant. Just like Windows and your favorite apps, it’s available in light and dark theme: 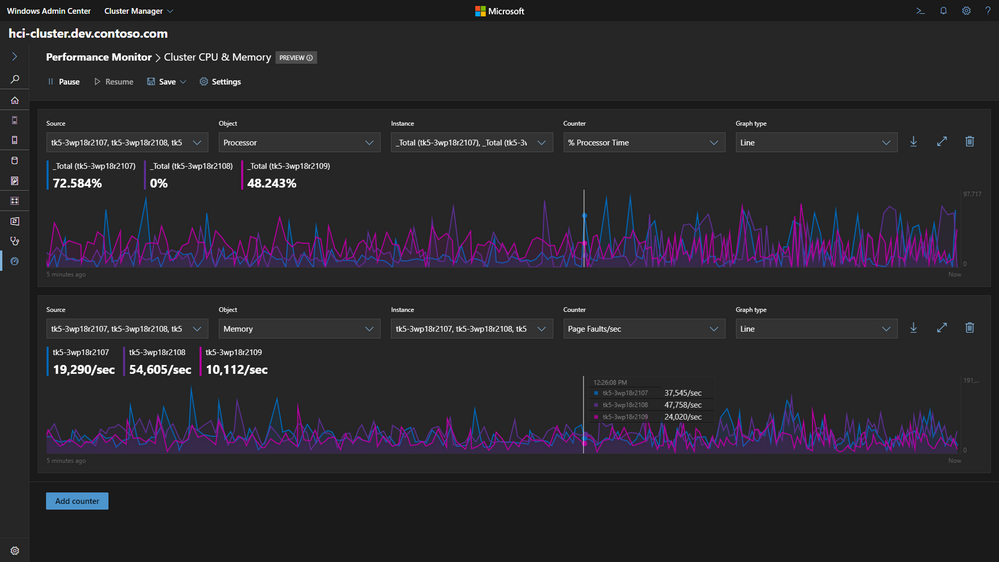 Modern usability
To get started, choose the Object, Instance, and Counter from the successive combobox controls at the top. There are 1,000s of counters out there, so if you already know which one(s) you want, save time by keyword searching the list:

To help you choose if you don’t already know, details about each counter appear when you hover your cursor over its name: 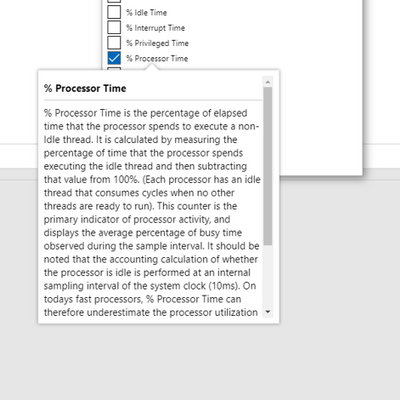 Once you’ve selected a counter, Performance Monitor suggests other counters that make sense to graph together based on their units – for example, Read Bytes/sec and Write Bytes/sec. 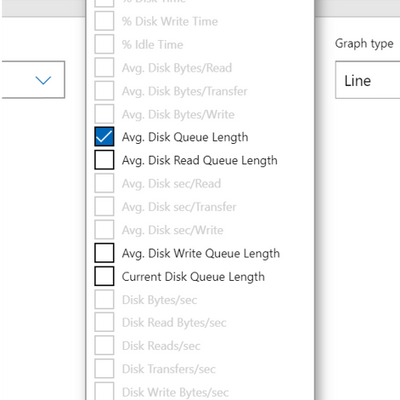 Simply check or uncheck boxes to add or remove instances and counters from the graph: 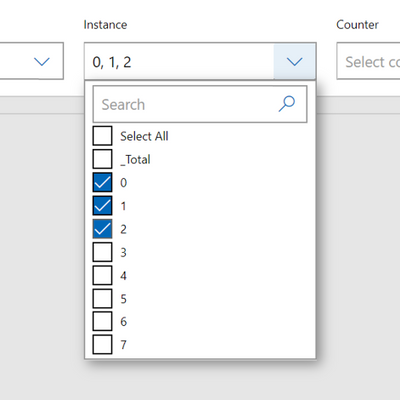 Graph types
The best way to visualize performance counters depends on what you’re doing, so the new Performance Monitor offers multiple graph types. Some are familiar, others are new, and yet more are in development. 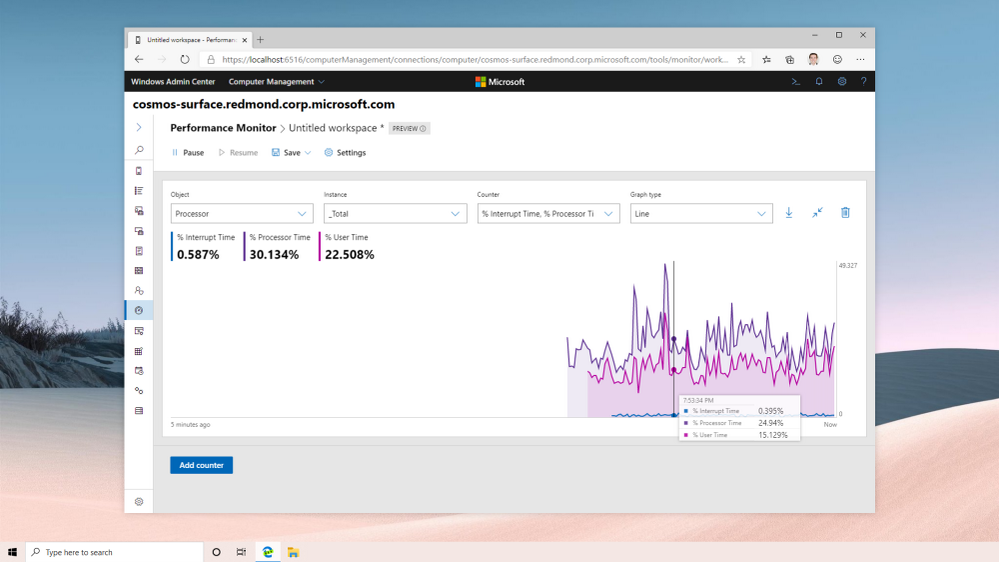 Use the Line graph to view one or multiple counters over time. New data gets rendered once every second, from the right edge. The vertical axis is the counter value(s) and adjusts automatically. The horizontal axis is time. The default time domain is five minutes, which you can adjust in Settings.
To inspect the values at any point in time, hover over that point with your cursor. To more easily distinguish one line among others on the same graph, hover over its legend:

Add multiple line graphs to one workspace to comfortably see many varied counters over time. The graphs update in sync and are linked by a shared vertical hairline that follows your cursor position:

For users with color vision deficiency, you can select a higher-contrast color palette in Settings. 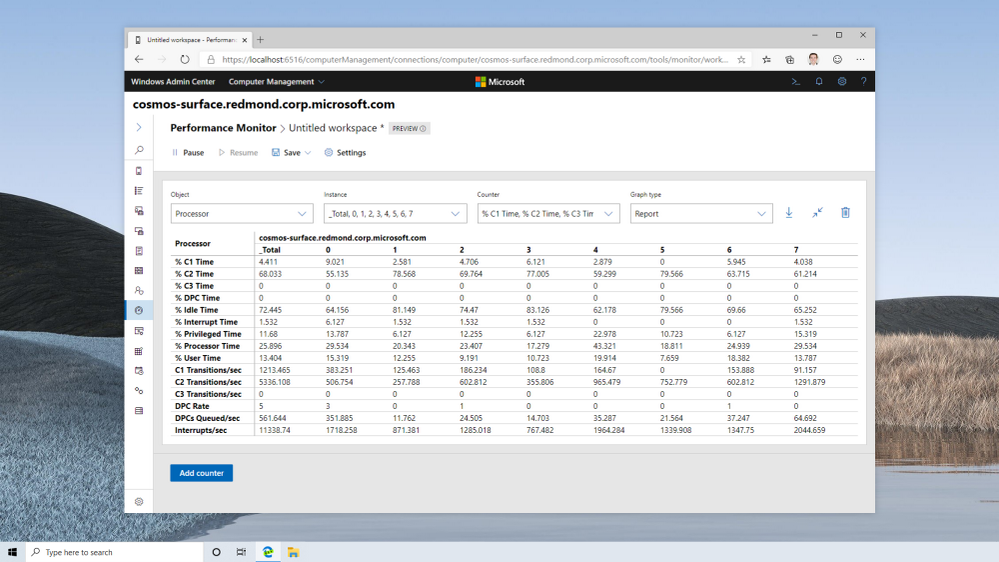 Use the Report to see unlimited instances and counters in one big table, where the columns are instances and the rows are counters – just like the original perfmon.exe. However, unlike perfmon.exe, full copy/paste is supported – in fact, you can copy the whole table into Microsoft Excel, or any Office application, and it just works.

Because the report updates every one second with the latest values, you may find it helpful to pause:

You can make the report’s font larger without distorting the rest of the user interface in Settings. 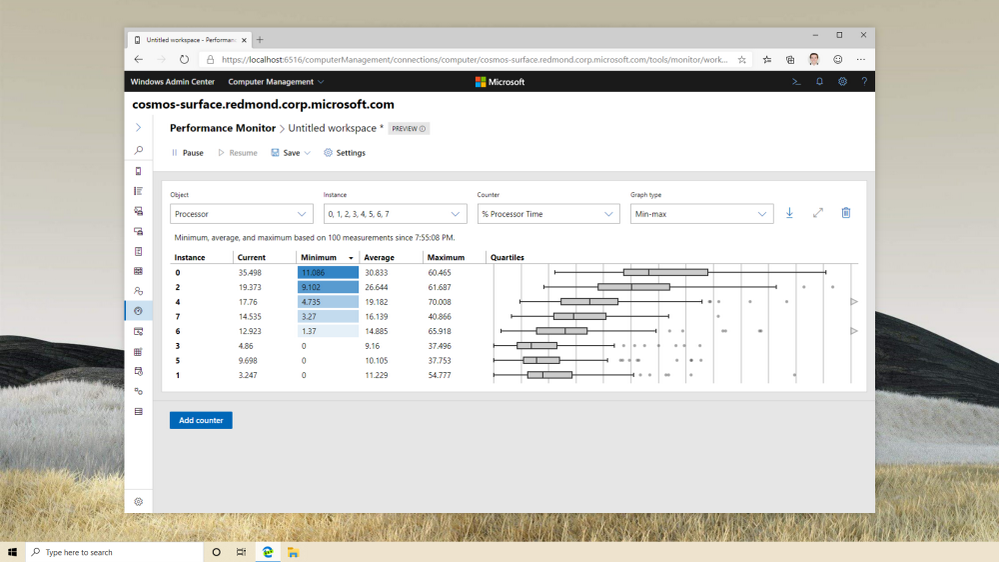 Use the new Min-max graph to compare instances of an object and look for imbalances or outliers. Each row is an instance. The columns on the left show the current value of the selected counter for that instance, as well as the minimum, average, and maximum observed values (since the time when the graph was added). You can sort the instances by any column – for example, you could sort Physical Disk instances by their maximum observed latency.

Once you’ve arranged the counters and graphs you find most helpful, you can save your Performance Monitor workspace to quickly get back to that layout again later. Saved workspaces are automatically available for every server you manage with Windows Admin Center. 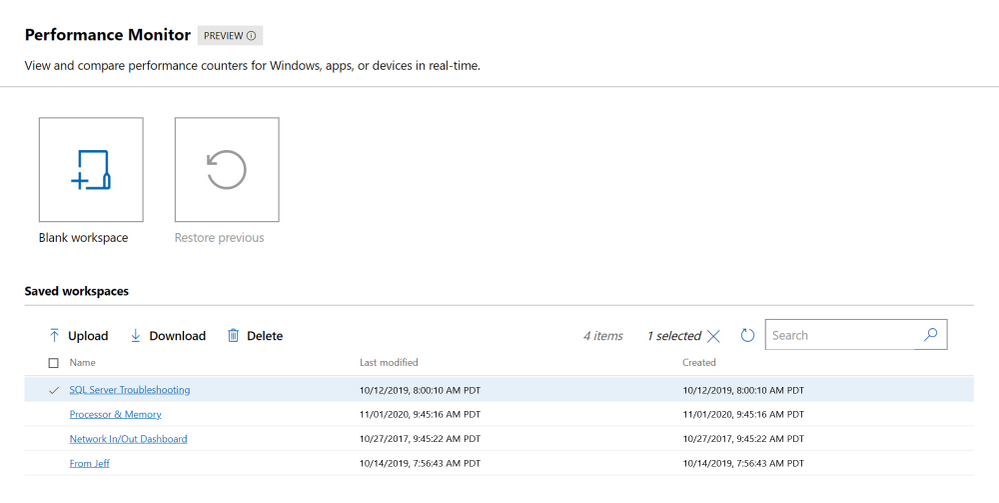 To share your workspace to other environments or with other people, you can download it as an easy-to-read JSON file that others can upload. The file contains workspace metadata, possibly including instance names, but does not include any actual data values.

In addition to individual Windows computers and servers, Performance Monitor makes it easy to aggregate performance counters for Windows Server clusters, including hyperconverged infrastructure like Azure Stack HCI. Simply connect to the cluster in Windows Admin Center and select Performance Monitor from the Tools list.

Every feature described above is available for Windows Server clusters, including all the graph types and the ability to save and share workspaces. The only difference is one additional combobox at the top to choose which cluster node(s) to include: 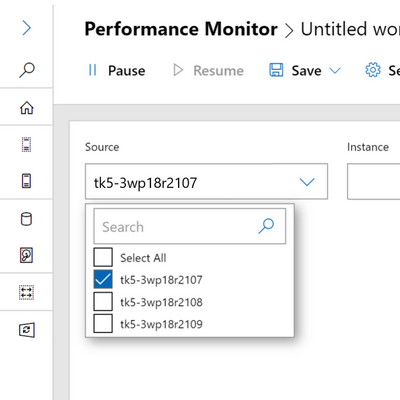 What happens now?
If you’re as excited as we are about the new Performance Monitor, you can try it right now! It’s available in Preview as part of Windows Admin Center version 1910, which you can download here. It works with Windows Server 2016, Windows Server 2019, and Insider Preview. It works with Windows 10 PCs too, although we’re exploring more convenient ways to distribute Performance Monitor for those customers.

We’re deeply happy to be making these core parts of Windows better for IT – finally! This first Preview is just the start: we know there’s more to do, and we could really use your input. Please consider taking our short survey: aka.ms/perfmon-feedback

Thank you for choosing Windows!