For UI Test Automation, once a test script runs successfully, the next step is to report the test execution results. Reports shows the ratio of pass/fail of the test cases, duration of a test run, and the total number of test scripts executed etc. It is the main document to be shared with stakeholders. Don’t you think it should be a user-friendly report with easy readability and customizable pie-charts?

With the DevOps speed, Test reporting becomes critical. With so many releases and permutations, you’re probably sitting on a mountain of data. And that makes it hard to focus on what’s important — plus it slows you down. You need the right test reporting to cut through the chaos.

I came across a user-friendly reporting tool called ExtentReports.

ExtentReports is one of the best built-in ways to generate customizable HTML reports with a good user interface which can be shared with all the major project stakeholders. With Extent Framework, you can create beautiful, interactive, and detailed reports for your tests. Add events, screenshots, tags, devices, authors, or any other relevant information you decide is important to create an informative and a stunning report.

It is an open source library that can be easily configured with Selenium, thereby making it the best choice for automation testers.

This is the extensive reporting for showing historical reports of tests from all the builds and provides a history of test case failures graph.

Both these classes can be used with several frequently used built-in methods:

StartTest and EndTest methods are utilized to execute preconditions and postconditions of a test case. The log method is utilized to log the status of each test step onto the resultant HTML report. The flush method is used to erase any previous data on a relevant report and create a whole new report.

A Test Status can be denoted by any of the following values:

How to capture screenshots in Extent Report:

By capturing screenshots, testers can better identify bugs since they can detect every issue encountered during test execution. However, since the screenshots consume quite a bit of memory, it is best to capture them only if a test fails.

The reports we discussed earlier was an HTML report which is offline and every time while the test executes, a new HTML file will be generated. However, to achieve the historical reporting of multiple test runs combined, we need to use Klov Reporter.

KlovReporter works with the Extent Framework to push data into a MongoDB instance and the Klov server (media). 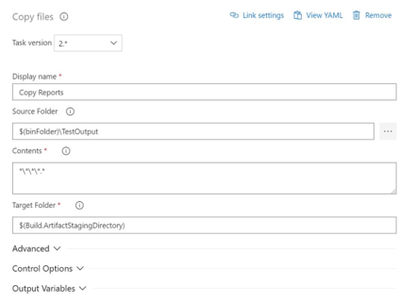 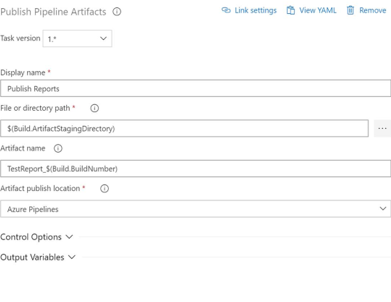 Step 3: Queue the build. Once published, reports will be available under artifacts in the pipeline