Hello everyone! We are MS Testing Services team and we are restarting the TestingSpot blog at msdn.com. It has been a few years of inactivity but our first post of the year is going to be a guide for Web Load Testing with Visual Studio, we hope you like it and start coming back for more!

This article provides consolidated information in a concise presentation for anyone who wants to start a web load test project using Visual Studio. You may have noticed that there is plenty of information on MSDN and visualstudio.com that tells you a lot of information about how things work like cloud testing or on-premises requirements, agents, controllers, webtests, plugins, etc.

However, the amount of information can be easily overwhelming and is not in a single and concise location, this article can be used as a starting guide for newcomers to understand the basic setup and to find the best route into achieving the results desired.

The first thing you will need is Visual Studio. The Web Load & Performance Testing features of Visual studio are only available on versions: Visual Studio Enterprise 2015 or Visual Studio Ultimate 2013.

On premises. No virtual user licenses are needed. You can execute load tests with any number of virtual users (as far as your hardware resources allow you) as long as you have any of the following:

* In Visual Studio Enterprise (or Ultimate) trial version, the virtual user count is limited to 250.

Cloud-Based testing. No extra software installation needed. You do need:

On premises. If you are planning to load test an application in an on-premises environment, you will need a Controller and at least 1 agent machine (check next section for hardware requirements). You can find the installable software for these two components based on your Visual studio version here:

– Download Agents for Microsoft Visual Studio 2013 Update 5 . This is the correct version of the Agents and Controllers software for load testing. Don’t use the Test Agents for VS 2015 for load testing. It is meant for continuous tests on build scenarios, it doesn’t have a test controller or a configuration tool.

Visual Studio is used to record webtests, kick off Load Tests and visualize results. It is not recommended to install it on the Controller machine or Test Agents. The system requirements for the machine to host either Visual Studio Enterprise 2015 or Visual Studio Ultimate 2013 are:

On premises. If you are planning a load test project in a on premises environment, you will need a controller and at least 1 test agent, to set this up you will need the following:

You can also execute local test runs (without controller or test agents) directly from your Visual Studio host, this is done normally for debugging purposes since you are limited by resources.

The table below shows the recommended hardware requirements. You can use this table to plan how many test agents and what size of controller suit your load testing needs:

SQL Server 2012 Express LocalDB, which is installed with Visual Studio is the default database server for load tests. If SQL Server Express is detected with an existing load test database, Visual Studio Enterprise will try to connect to it and use it.

However, for heavier database needs you should consider upgrading to a full SQL Server to provide further scaling potential. Also, SQL Express is limited to using a maximum of 4 GB of disk space. If you will run many load tests over a long period of time, you should consider configuring the load test results store to use an instance of the full SQL Server product if available. More on Load Test results repository .

Tip: In my experience, a typical single 1 hour load test can take from 100MB to 500MB of storage depending on the number of webtests, performance counters, VMs you are monitoring, etc. Plan storage needs accordingly and take in consideration that this information is temporarily stored in the Test Agents. When the test ends the results are collected in the Controller's RAM memory before finally being placed in the SQL Repository, so also plan RAM Memory needs accordingly.

For test scenarios (still on premises) using Visual Studio Online (VSO) or Team Foundation Server (TFS) 2015, you won’t need a test controller because Agents for Microsoft Visual Studio 2015 handle orchestration by communicating with VSO or TFS 2015. For example, you’re running automated tests with your build and release workflows in VSO or TFS 2015.

Cloud-Based Load testing. You can use cloud-based load testing to avoid having to use your own resources and machines. In this case you don’t need a Controller or Test Agents. The cloud-service provides virtual machines in the cloud that generate the load needed to test your target application/website.

All you need is a Visual Studio Online (VSO) account. Check ‘Getting started with Load Tests’ further down in this document.

At the most basic level you will need to do the following steps to get started:

Follow this article to learn how to create the most basic components.

Check this article to find out how to add predefined Validation rules to your webtest. You can also create your own Validation rules, check Customization section further down on this page.

You can bind parameters (e.g. form post parameters) on the requests of your WebTest to data sources to provide different values to the same test. This makes your load test more solid and realistic. You have several options for the data source type:

Check this article for a step by step guide.

4. Getting started with Load Tests

Load Test can be created in a Load Test projects. If you followed the article at the start of Section 3 of this page you must already have a simple Load test. Some of the Load test settings and scenarios can be setup on the initial Wizard or directly on the load test afterwards. Below are descriptions for the main sections:

Load tests contain scenarios, which contain Web performance tests. Scenarios are important because they give you flexibility in configuring test characteristics that allow for simulation of complex, realistic workloads. You can have more than one scenario per load test.

Use the Load pattern, test mix model and test mix to specify what webtests to use, the manner in which the load will be applied to your application and pacing.

Counter sets that are useful when you analyze performance counter data. The counter sets are organized by technology such as Application, .NET Application, IIS, or SQL. You can create counter sets during the initial New Load Test Wizard or later on the load test file itself.

There is a set of predefined counter sets or you can create your own. You can also add counters to the default Counter Sets or to your own. The counters are added from Perfmon.

On the Run settings section of a load test you can specify Counter Set mappings where you can add computers (by DNS or IP) and map them to Counter sets. Visual studio will collect data for every counter on a set for each computer where it is mapped to.

To learn more about Counter Sets, thresholds, sampling and other tasks, check this article on MSDN .

Run settings are properties that organize the manner in which a load test runs. You can have more than one run setting in a load test but only one can be active at a time while the other settings provide a quick way to select an alternative settings.

Settings are used to specify things like test duration, Logging, SQL server collection, warm up duration, sampling rate or validation setting between others. You can also add Counter Set Mappings to map computers to Counter Sets.

Check this article for full description of tasks available.

Make sure your Load test is configure to run On premises by checking the General section of your active .testsetting file on your Solution. Test Settings are not the same as Run Settings.

Other items to configure on this window are Roles and Timeouts. On the Roles section, test execution method should be set to ‘Remote execution’ if you want to use your Controller and Test Agents. Check this couple of article to learn more about Test settings: Managing Test Controllers and Test Agents with Visual Studio , Edit Test Settings .

From that point forward you should be ready to run a Load Test. During or after run time you have access to Graphs and Tables with throughput, response times information, performance counters for the computers you configured and details on vusers activity. Check this tutorial to learn more: Run and analyze your load test .

There are a couple of options for running a Load test with the Cloud Service: 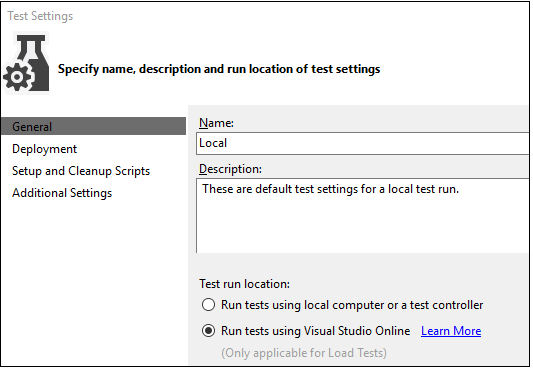 Visual Studio offers extendibility options to increase the built-in functionality. Follow the articles below to learn more about the different options:

Please feel free to ask questions in the Comments section of this blog post. I can try to answer them and add them to this FAQ.

How many vusers can I run per agent?

As mentioned above the recommendation is up to 500 for a 2.6 GHz processor and up to 1000 for a Dual 2.6 GHz processor. This can change depending on the length of the webtests, the payloads of the application responses and the use of custom plug-ins.

What version of SQL do I need?

SQL Express or SQL Express 2012 Localdb for local test runs and debugging. Full SQL for heavier needs such as an Enterprise level application performance test project, for example the standard version of SQL Server 2014, 2012, or 2008 R2.

Can load tests use other test types in their test mix besides web performance tests?

Yes, you can include unit tests and coded UI tests.

Yes, you can specify think times to simulate the time spent by a user on a web page.

Can I mix versions of TFS, Microsoft Test Manager, the test controller, and test agent?

Yes, here are the compatible and supported combinations:

What firewall permissions do I need?

You should create exceptions for the mentioned ports on the firewall, you can also change the port. Check this msdn article for more information: Configuring Ports for Test Controllers and Test Agents

What databases can I use as a data source?

You can use the following:

What is a good place to learn more?

Aside from MSDN you can go to Channel 9 videos for a more visual learning experience: https://blogs.msdn.microsoft.com/visualstudioalm/2015/12/10/visual-studio-2015-test-tools-getting-s...