How to Guide for SC- Virtual Machine Manager 2019 UR1 features 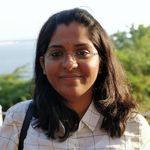 How to Guide for SC- Virtual Machine Manager 2019 UR1 features

The very first update roll up for System Center Virtual Machine Manager 2019 is now available. The update release contains several features requested by customers on VMM user voice and other forums. Thanks for engaging with us and helping us improve VMM. We know you were eagerly waiting for this release and are excited to know about What’s new in SCVMM 2019 UR1. This release brings improvements in resiliency and also introduced new feature capabilities.

In this blog, we will talk about the new features, and will answer most of the "Why" and "How" questions you may have. For details of all the bug fixes in this release refer to the KB article here

New Features Introduced in SCVMM 2019 UR1

Large enterprises, usually have multi-site data-center deployments to cater to various offices across the globe. These enterprises typically have a central VMM server but locally available library servers at each data center to access files for VM deployment. rather than. This is to avoid any network related issues one might experience while accessing the library shares from a remote location. However, library files need to be consistent across all the data-centers to ensure uniform VM deployments. To maintain uniformity of library contents, organizations use replication technologies like DFSR.

Grouping of Logical Network types based on their use cases. 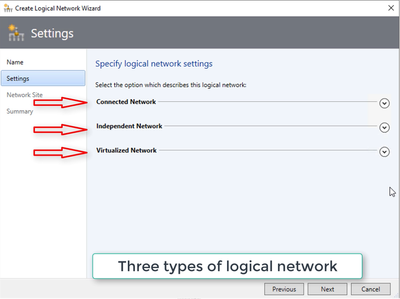 This network type was earlier known as ‘One Connected Network’.

When to use this type of network?

Contoso is an enterprise. It needs a network to host their DevTest workloads. This network may have multiple VLANs / Subnets. Contoso creates a logical network of type ‘Connected network’. VMM is responsible to assign the VLAN / Subnet to the VMs based on the host group on which the VM is placed to.

Multiple VM networks can be created on top of this logical network. Each VM network created, provides access to a specific VLAN-Subnet pair. The VM networks are independent to each other.

There are two types of ‘Independent’ networks.

When to use this type of network? 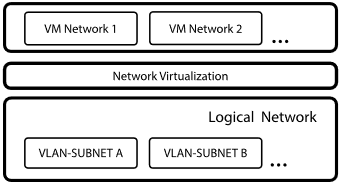 In-product descriptions and Illustration of the logical network types

Each type of logical network has an in-product description and an illustration describing the use case. 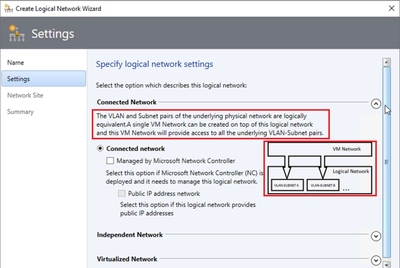 A connected experience to create IP pools within the logical network wizard. 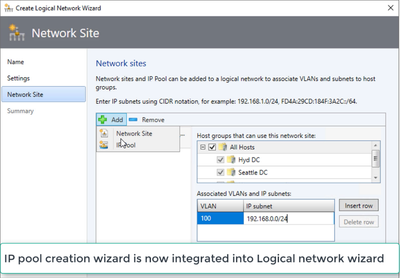 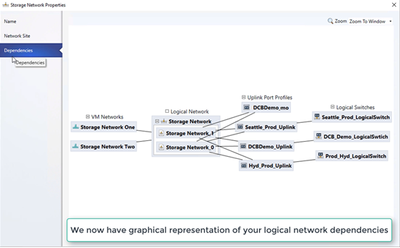 Traditionally datacenters used SAN for their enterprise storage needs and a dedicated network for Storage Traffic. This network was a Fiber channel network with a dedicated switch. This was a ‘LOSSLESS’ network and had a very good SLA / performance for storage traffic.

With the advent of ‘Converged Networking’ customers are using ‘Ethernet’ network as a converged network for their management as well as storage traffic. Hence, it is important for Ethernet networks to support a similar level for performance and lossless’ness compared to that of dedicated Fiber channel networks. This becomes more important when you consider a Storage Spaces direct cluster.

The East-West traffic needs to be lossless for the Storage Spaces direct cluster to perform well. Remote Direct Memory Access (RDMA) in conjunction with Datacenter Bridging (DCB) helps to achieve similar level of performance and lossless’ness in an Ethernet network as a Fiber channel networks.

The DCB settings needs to be configured consistently across all the hosts and the fabric network (switches). A misconfigured DCB setting in any one of the host / fabric device is detrimental to the S2D performance.

We are now supporting configuring DCB settings right in the S2D creation workflow of VMM.

What is supported and what is not supported

3. Configuration of DCB settings during cluster creation is supported only when the cluster is created with a Windows Server which has been deployed. It is not supported with Bare Metal / Operating system deployment workflow.

How to configure DCB Settings 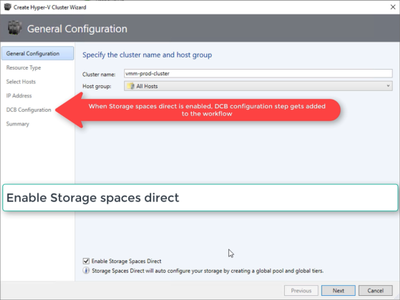 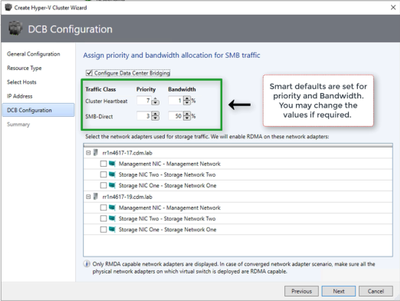 Note: A default value is assigned to Priority and Bandwidth. Customize it based on the needs of your environment. 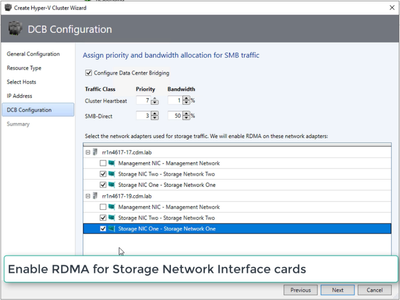 Note: In a converged NIC scenario, select the storage vNICs. The underlying pNICs should be RDMA capable for vNICs to be displayed and available for selection.

5. Review the summary and finish. A S2D cluster will be created and the DCB parameters will be configured on all the S2D Nodes.

Note: DCB settings can be configured on the existing Hyper-V S2D clusters by visiting the cluster properties page and navigating to ‘DCB configuration’ page.

Note: Any out of band changes to DCB settings on any of the nodes will cause the S2D cluster to be non-compliant in VMM. A ‘Remediate’ option will be provided in the ‘DCB configuration’ page of cluster properties which customers can use to enforce the DCB settings configured in VMM on the cluster nodes.

We love bringing these features to you and hope you find these helpful in your VMM deployment. We look forward to your feedback!