Turn on suggestions
Auto-suggest helps you quickly narrow down your search results by suggesting possible matches as you type.
Showing results for
Show  only  | Search instead for
Did you mean:
Meet the 2020 Imagine Cup World Champion: Team Hollo from Hong Kong SAR!
By 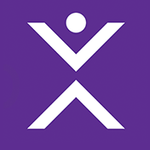 The 18th annual Imagine Cup saw thousands of students across the world submitting innovations to impact their communities, both locally and globally. The competition advanced through hackathons, Online Semifinals, and virtual Regional Final events bringing together finalists via Microsoft Teams. Six teams were selected to move forward to the World Championship and present their projects to compete for the 2020 trophy on the biggest stage yet—the Microsoft Build digital event.

Congratulations to Team Hollo from the University of Hong Kong who won the grand prize for their mental health companion web app leveraging Azure analytics and AI services to advance youth therapy practices. The team won USD100,000, a mentoring session with Microsoft CEO Satya Nadella, and USD50,000 in Azure grants.

Imagine Cup aims to empower students to use their imagination and passion for technology to develop innovative and inclusive solutions that tackle key societal issues. With an increasing focus on bringing the world together digitally, we're continuously encouraged by the projects young developers create to make a difference. This year’s finalist solutions covered issues in healthcare, agriculture, misinformation detection, and more.  Because of global health concerns due to COVID-19, we decided to move this year’s competition to a virtual format, and World Finalists pitched their projects during Microsoft Build’s inaugural digital event.

The 2020 World Championship was judged by innovation experts spanning a variety of technology, diversity, and social change-centered experiences that align to the core of Imagine Cup’s mission.  Across her extensive career as a tech innovator and leader Dwana Franklin-Davis, CEO of Reboot Representation, has worked to empower underrepresented groups in technology. The CyberCode Twins, America and Penelope Lopez, are young innovators who’ve participated in tech competitions across the world and hope to introduce other students to opportunities in the field. Finally, Microsoft president, Brad Smith, leads work on a wide range of issues involving the intersection of technology and society, including ethics and AI, human rights, and environmental sustainability.

Kicking off the World Championship with a short pitch of their projects in the lightning round, judges selected Team Hollo, along with Team Syrinx from Japan and Team Tremor Vision from the United States, to advance to the second and final round of the competition. Each of the top three teams then gave an in-depth presentation their solutions, which were assessed for their diversity, originality, and innovative design. Watch the show to experience the moment when Team Hollo is crowned champion! 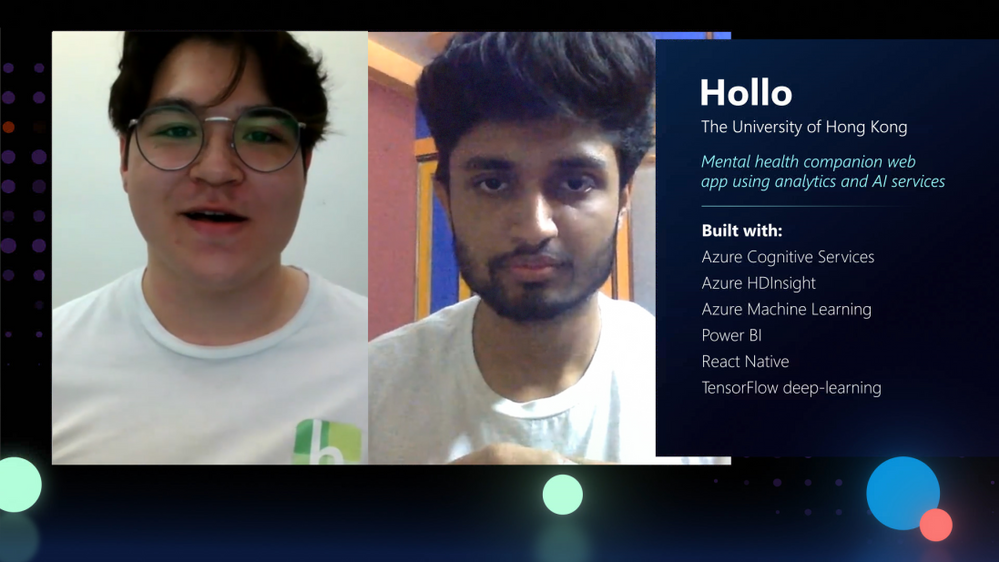 After meeting in school, the team brought a collaborative desire for social change focusing on young people and inequality to their project, combined with a passion for tech. Team Hollo noticed that mental health aid was not effectively reaching the younger generations in their communities and envision a future of tech-based, accessible, and comprehensive mental health management tools. Team member Cameron van Breda said, “The experience of mental health is felt by everyone… being able to win Imagine Cup and support the awareness of mental health and be able to work on it with technology is something that’s really needed in the world.”

As a smart AI-powered preventative platform, the app aims to improve individual mental health by integrating Machine Learning with suggestive diagnosis, therapy, and continual monitoring, in order to facilitate self-help and professional therapeutic services. With an interactive mobile app for users and a comprehensive case management dashboard for therapists & NGOs, Hollo presents a collaborative and scalable mental health platform which aims to cut the heavy cost of mental health care for youth and make support more accessible. Team member Piyush Jha noted, “The accessibility part of this application makes it really welcoming for anyone and everyone, anywhere in the world, to make sure they’re doing well.”

When asked about future plans, Hollo responded, “We’re going to be able to implement a lot of current research… and really be able to create a collaborative effort in the mental health space. We feel like that’s really important, getting this global perspective.” 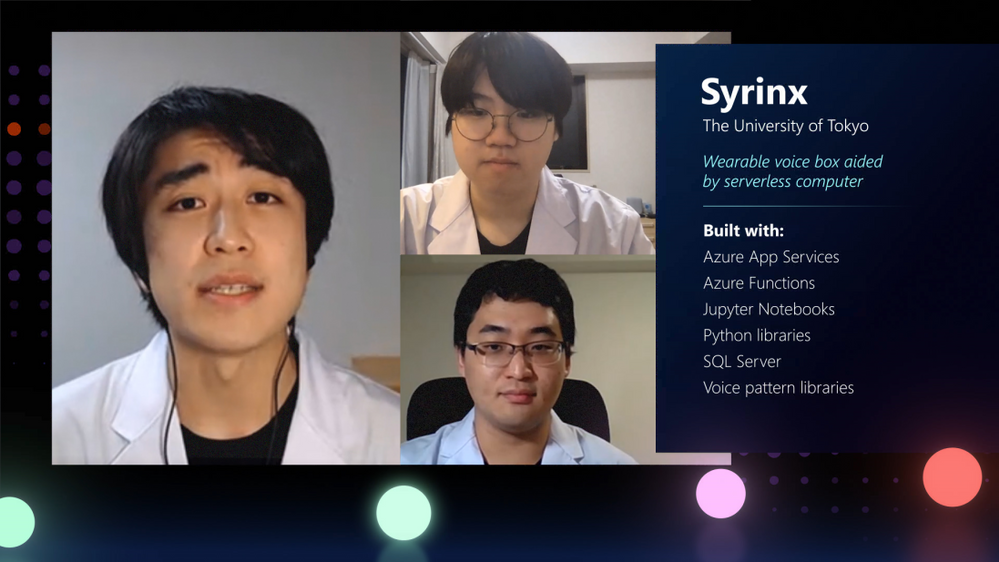 Syrinx, a neck wearable EL (electrolarynx) device, restores the ability to speak for people who have lost their voices. Around the globe, over 300 thousand people lose the ability to speak each year. However, traditional electrolarynx devices to restore speaking capabilities can only produce a monotonic robot-like voice and require the use of one hand to talk. This can cause social and communication issues for the user, which the team hopes to solve.

Leveraging Azure Notebooks technology, Syrinx’s device vibrates the user's throat to create a sound that matches the movement of their mouth, then uses neural networks to learn the characteristics of the lost voice in order to restore it. This allows Syrinx to produce a more natural sounding human voice through their device, including both male and female voice patterns. “Next step is to increase users for the beta test to try out this device. I’d like to improve the function of our device for a more human-like voice,” commented team member Masaki Takeuchi. “Syrinx will be a device for not only laryngectomy or tracheostomy patients, but also people all over the world.” 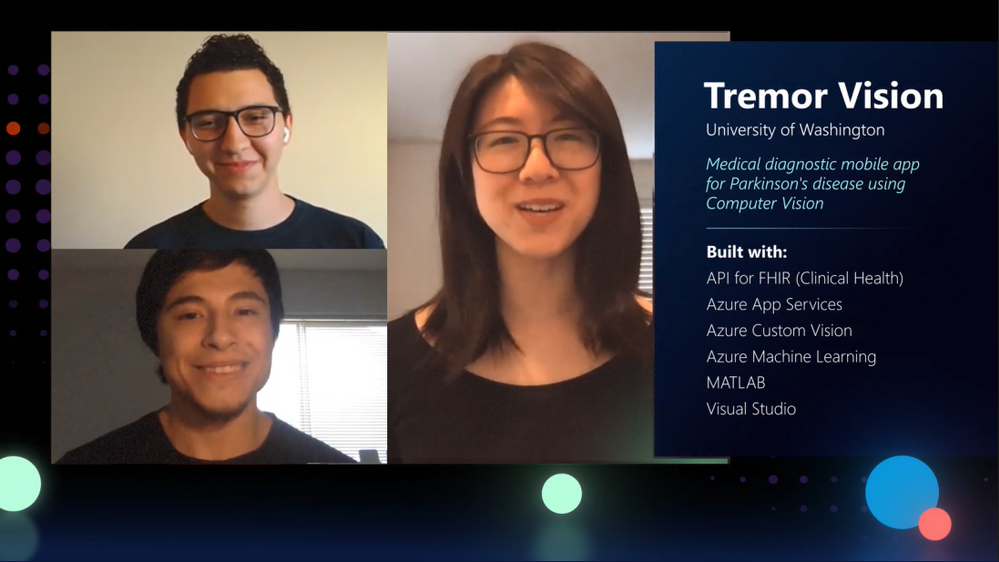 Tremor Vision is a web-based tool that enables physicians to detect early-onset Parkinson’s and quantitatively track patient progress throughout a prescribed treatment plan. Although Parkinson’s is the second most common age-related neurodegenerative disorder, there is currently no standardized way of evaluating the spiral test, one of the most widely conducted examinations to detect early-onset of the disease and track its progression. Team member Robert Minneker commented, “The why and how is really important when bringing technology to life. Getting it to the people that need it and being able to communicate why it matters is huge.”

By using a touchscreen device connected to the internet, users of Tremor Vision’s tool can send clinical results to their physician. The platform empowers patients to save the time and money required by routine clinical visits and increases a physician’s reach in screening for early signs of Parkinson’s. The team uses Microsoft Azure Cognitive Services, MATLAB, and Microsoft Visual Studio.  “We put 100% of our effort into making something really cool”, shared team member Janae Chan. “We started in a place where we weren’t really sure if we should or if this idea is worthwhile to present. I think any idea is worthwhile as long as you believe in it and you’re giving back to the people that you’re trying to help.”

Registration for the 2021 competition is now open. Join over two million student competitors worldwide in making an impact in what you’re most passionate about and  sign up  for Imagine Cup today!