I’m Tsan Zheng, a Senior Test Lead on the DFS team. If you’ve used DFSR (DFS Replication), you’re probably aware that the largest amount of data that we had tested replication with until recently was 10 TB. A few years ago, that was a lot of data, but now, not so much.


First of all, let’s all look at what 100 TB of data could mean: It could be around 340,000 8 megapixel pictures (that’s 10 years of pictures if you take 100 pictures every day), or 3,400 Blu-Ray quality full-length movies, or billions of office documents, or 5,000 decent sized Exchange mailbox files, or 2,000 decent virtual machine files. That’s a lot of data even in the year of 2013. If you’re using 2 TB hard drives, you need at least 120 of them just to set up two servers to handle this amount of data. Now we have to clarify here that the absolute performance of cloning a DFSR dataset is largely dependent on the number of files and directories, not the actual size of the files (if we use verification level 0 or 1, which don’t involve verifying full file hashes).


In designing the test, we not only need to make sure we set up things correctly, but also we need to make sure that replication happens as expected after the initial preparation of the dataset - you don’t want data corruption when replication is being set up! Preparing the data for replication also must go fast if we’re going to prep a 100 TB of data in a reasonable amount of time.


In order to get several performance data points from a DFSR perspective (as DFSR uses one database per volume), we used following volume sizes that total 100 TB on both ends. We used a synthetic file generator to create ~92 TB of unique data; the remaining 8 TB was human-generated data harvested from internal file sets. It’s difficult to have that much real data...not counting VHDx files and peeking into personal archives, of course! We used the robocopy commands provided by DFSR cloning to pre-seed the second member.

In a nutshell, following diagram shows the test topology used. 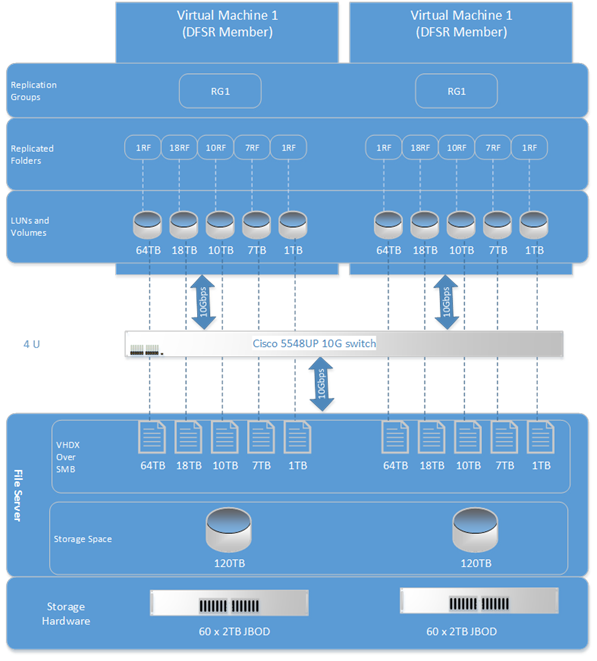 Now that storage and file sets are ready, let’s look at what verification we did during Export -> Pre-seed -> Import sequence.


Following table and graphs summarize the results one of our testers Jialin Le took on a build that was very close to the RTM build of Windows Server 2012 R2. Given the nature of DFSR clone verification levels, it’s not recommended to use validation level 2 (which involves full file hash and is too time consuming for large dataset like this one!)


Note, the performance for level 0 and level 1 validation is largely dependent on count of files and directories rather than absolute file size, it explains why it takes proportionally more time for 64TB volume to export compared that of 18TB as the former has proportionally more folders.

From the chart above, you can see getting DFSR ready for replication for large dataset (totaling 100TB) is getting more practical!


Update May 2014: See it all in video! TechEd North America 2014 with live demos and walkthroughs:

I hope you have enjoyed learning more about how we test DFSR features here at Microsoft. For more info on cloning, see our TechNet walkthrough article.