An ‘under the hood’ change on Windows Server 2008 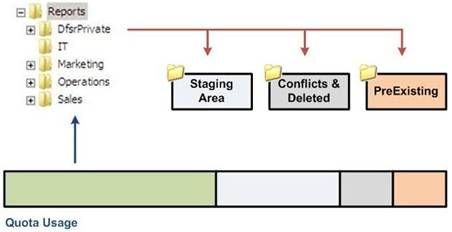 However, this design doesn’t necessarily interoperate very well with some other applications that may be running on the file server. For instance, consider quota management applications. If the administrator sets a quota on the root of the replicated folder with a view of constraining the amount of space utilized by that folder/share, the space used by the contents of the ‘DfsrPrivate’ folder also end up getting counted towards that quota. Further, some quota management tools do not support excluding certain subfolders from the quota. The folders under ‘DfsrPrivate’ can end up growing reasonably large and consume large amounts of space. If the configured quota is hit, the quota management application starts returning disk full errors to the DFS Replication service. This adversely affects various aspects of replication including the staging process. Such eventualities could end up slowing down replication since there would need to be frequent staging area cleanups in order for the DFS Replication service to free up enough space to continue replication activities. Additionally, this behavior doesn’t constitute the most optimal quota consumption possible and end users might end up getting starved of quota.


Here <Replicated Folder Id> and <Member Id> are essentially GUIDs which uniquely identify each replicated folder on that member server. Additionally, a directory junction point is created under the replicated folder root with the same old name ‘ DfsrPrivate ’ that now points to this new folder location under ‘System Volume Information’. The junction point also ensures that the DFS Management snap-in is able to work seamlessly while configuring both Windows Server 2003 R2 and Windows Server 2008 based DFS Replication servers. The snap-in thus still shows ‘Staging’ and ‘PreExisting’ folders to be subfolders of the ‘DfsrPrivate’ folder under the replicated folder root.

This change ensures that the size of the files in ‘DfsrPrivate’ does not contribute to the quota usage statistics for the replicated folder.