This post is a part of the nine-part “ What’s New in Windows Server & System Center 2012 R2 ” series that is featured on Brad Anderson’s In the Cloud blog.  Today’s blog post covers iSCSI Target Server and how it applies to the larger topic of “Transform the Datacenter.”  To read that post and see the other technologies discussed, read today’s post: “ What’s New in 2012 R2: IaaS Innovations .”


At the high-level, the two sets of enhancements are:


Let us go into more detail on each of these below. My objectives with this blog post are two: to help you become familiar with new functionality, and to make you comfortable to quickly using the new iSCSI Target Server hands-on.

The good news is that this conceptual framework remains unchanged in Windows Server 2012 R2 although it packs a powerful set of infrastructure changes under the covers. Here is a pictorial that summarizes the Virtual Disk enhancements in the core stack. 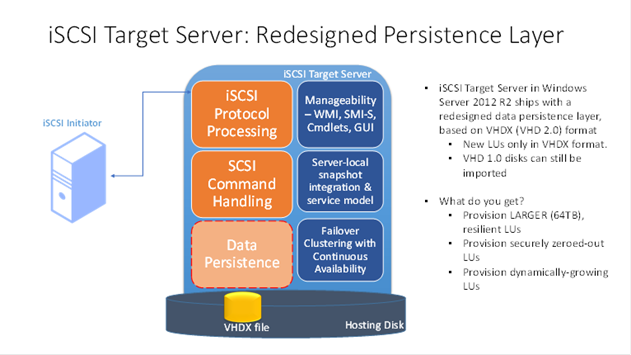 
In addition to these, our File and Storage Services UI team has done an excellent job in taking advantage of these new enhancements, such that you can simply use Server Manager to start playing with these new features right away. Here is a screen shot of the ‘New iSCSI Virtual Disk’ wizard that perhaps illustrates the enhancements the best: 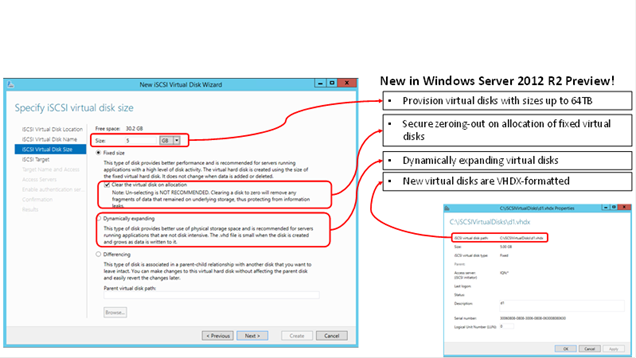 We have also made a couple of other key enhancements:


Good news is that existing “ iSCSI Target Block Storage, How To ” TechNet guidance for Windows Server 2012 remains unchanged for this release. Follow the same steps documented for setting up the iSCSI Target Server feature. No additional configuration is required for enabling the functionality to exercise this scenario. iSCSI Target Server is ready to use the VHDX format!


You can either use the Server Manager à File and Storage Services à iSCSI GUI (refer to the previous screen shot), or use the iSCSI Target PS cmdlets documented on TechNet for Windows Server 2012: iSCSI Target Cmdlets in Windows PowerShell

A handful of things worth noting here to start heading in the right direction:


You should be able to


Let me again start with a recap on the SMI-S provider, which is the most significant enhancement in this group. iSCSI Target Server had shipped a Windows Server 2012-compatible SMI-S provider with System Center Virtual Machine Manager (SCVMM) 2012 SP1. This required installation from SCVMM media onto an iSCSI Target Server computer, not to mention some additional configuration steps detailed on SCVMM storage configuration guidance on TechNet. Windows Server 2012 R2 now significantly improves the SMI-S provider, and brings it into in-box. 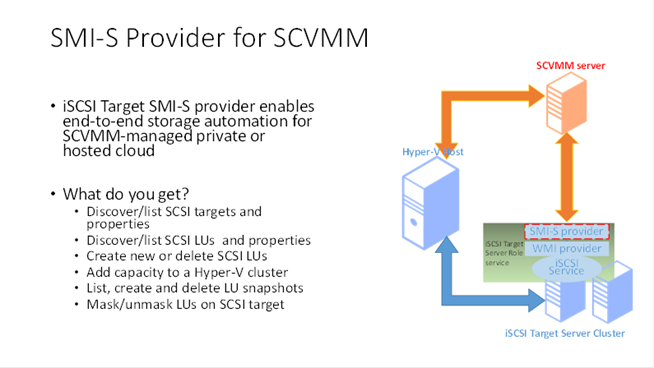 As shown in the diagram above, SMI-S provider ships and installs as part of the iSCSI Target Server. No separate configuration steps are necessary, SMI-S provider process is auto-instantiated on demand. SMI-S provider presents a different, standards-compliant management object model to SCVMM, but it transparently uses the same WMI provider that Windows PowerShell cmdlets use. SMI-S provider in Windows Server 2012 R2 is designed for dual active iSCSI target clusters whereas the previous version was limited to active-passive clusters. The new SMI-S provider also supports asynchronous job management for long-running Create/Expand/Restore jobs – so these are also cancelable from SCVMM. The following screen shot shows the storage manageability view from SCVMM for an iSCSI Target Server. 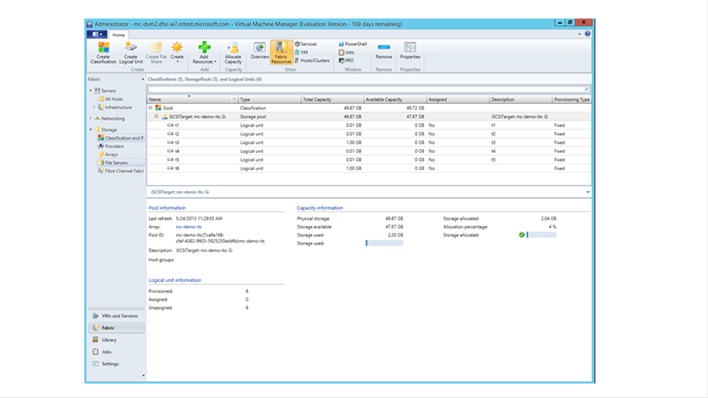 
How to get started?

You can use Export-iSCSITargetServerConfiguration with the following syntax. When you run the Export from Windows Server 2012 R2 to export configuration from a down-level OS version computer, be sure to use the ‘ComputerName’ parameter to point to the right down-level computer.

And here is the syntax for Import-iSCSITargetServerConfiguration:

Note that as with the previous PS script, Export/Import operations do not migrate CHAP settings for security reasons – because we do not want to export an encrypted password in clear. So you will need to note passwords through some other means, and re-configure them on the destination computer after finishing the Import operation. Expect a complete migration guide to be available on TechNet in the very near future that will go into a lot more detail on this topic.


You should be able to


iSCSI Target Server ships with a lot of exciting new functionality in Windows Server 2012 R2. Here are a couple of other useful pointers:

To conclude, hope this blog post gave you some insight and familiarity to start using the new iSCSI Target Server right away! Drop me an offline note using the blue “Contact” button on this page with your feedback on how it’s going.


To see all of the posts in this series, check out the What’s New in Windows Server & System Center 2012 R2 archive.