Turn on suggestions
Auto-suggest helps you quickly narrow down your search results by suggesting possible matches as you type.
Showing results for
Show  only  | Search instead for
Did you mean:
iSCSI Target cmdlet reference
By


Windows Server 2012 comes with a complete set of PowerShell cmdlets for iSCSI. By combining the iSCSI target, iSCSI initiator, and storage cmdlets, you can automate pretty much all management tasks. This blog post will provide you with some examples. If you want more information about iSCSI Target and its basic configuration cmdlet, please see Introduction to iSCSI Target in Windows Server 2012 .


The Cmdlets are grouped into modules. To get all the cmdlets in a module, type “ get-command –module <name> ”. For example:


General Windows PowerShell guidelines were followed in the development of these cmdlets, using the standard Windows PowerShell cmdlet verbs to manage the objects. If you are familiar with powershell, it is quite easy to pick up these modules.

Note : if you open the iSCSI initiator control panel applet, it will prompt you to start this service and change the service startup type to Automatic.


Specific cluster-related cmdlet to create the “iSCSI Target Server Clustered role” requires the Failover Clustering feature. You can enable this feature and its management tool using the following:


The iSCSI Initiator and iSCSI Target modules are both loaded by default on Server,. The nouns managed by both modules are prefixed with Iscsi . This section explains these nouns.


The diagram below illustrates the relationship of the cmdlet nouns in a simplified view:

The following nouns are managed, accessed, and hosted on the iSCSI initiator computer :

The following cmdlet nouns are hosted on and managed by the iSCSI Target Server computer :


1. For differencing VHDs, you will need to run Convert-IscsiVirtualDisk before importing them.


Cmdlet help has a new mechanism to allow dynamic update of the content from the Internet. Before using the help, you need to run “ Update-help –module <name> ” to get the latest help content. This implies the computer has Internet connectivity. To get help for all modules, type “ Update-help ”.


If you search for the cmdlets that can manage iSCSIVirtualdisk, you can type:


This is a great way to find all the cmdlets that can manage the iSCSIVirtual disks.


To learn more about iSCSI Target configuration cmdlets, see Introduction to iSCSI Target in Windows Server 2012 . This blog post will focus on the following iSCSI management and maintenance tasks to:

The following diagram illustrates these tasks. To setup this scenario, use the iSCSI cmdlets listed in Introduction to iSCSI Target in Windows Server 2012 . 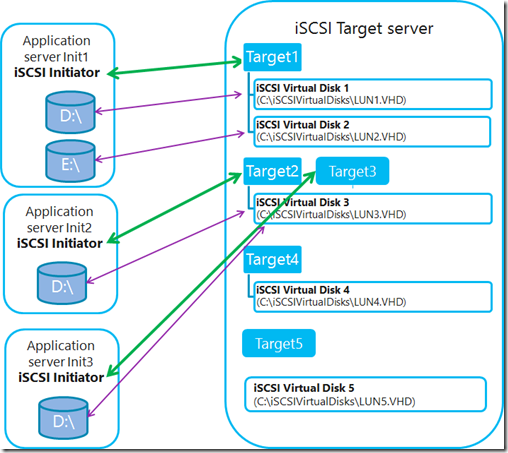 
1. Get all iSCSI targets associated with a virtual disk


Using the above example, let’s say something went wrong with iSCSI Virtual Disk 3 and you want to find all the iSCSI targets associated with this virtual disk. You can run the following: 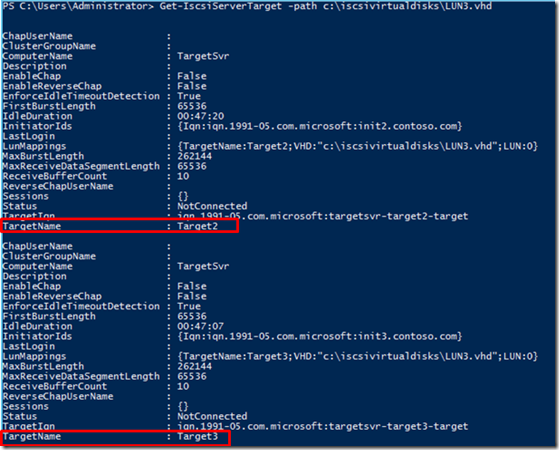 For the example above, the output shows all the iSCSI targets (Target2 and Target3) associated with the virtual disk (c:\Iscsivirtualdisks\LUN3.vhd).


2. Get all virtual disks associated with an iSCSI target


In this example, the Target1 got disconnected for some reason, you want to find all the iSCSI virtual disks which are associated with this Target: 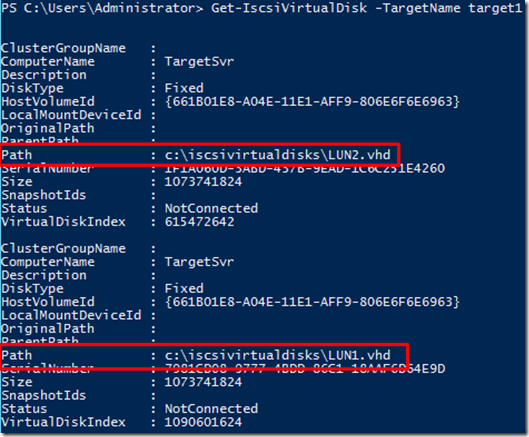 The output shows all the Virtual disks (LUN1.VHD and LUN2.VHD) which are associated with Target1.


3. Get all the iSCSI initiators accessing a virtual disk


Suppose one of the virtual disks (C:\IscsiVirtualDisks\LUN3.VHD) is having issues, and you want to disable it. Before doing that, you want to find all the initiators which will be affected:

The cmdlet shows the initiators that are accessible by the virtual disk (C:\IscsiVirtualDisks\LUN3.VHD)


4. Get all virtual disks used by an iSCSI initiator


Say one of the initiators (init1) is going offline and; you want to determine all the virtual disks which can be accessed by Init1 using its IQN:


Suppose there has been a change to iSCSI initiator computer Init1 and a new computer Init5 that is replacing it. You want to assign to Init5 all the iSCSI targets which were associated with Init1.


Note: This cmdlet will remove all existing initiator assignments for the given targets, and replace it with the new initiator ID. To add initiators, use the cmdlet in the next section.


6. Add an iSCSI initiator to an iSCSI target


You want to add a new computer Init4 and build a two- node cluster with Init1. To do so, you need to add Init4 to the Target1 InitiatorID so that Init4 can also logon to Target1 to access the shared storage:


Note: $c is to remember the existing initiators assigned to the Target.


If you don’t remember which iSCSI target Init1 was associated with, use the following:

The Target now has both Init1 and Init4 added to allow access.


Note: You can also get the IQN of the initiator on the local computer by running:

7. Remove all virtual disks from an iSCSI target


While doing maintenance on the iSCSI target, you find Init3 is accessing the same iSCSI virtual disk as Init2. You want to reassign Init3 to Target4 and remove Target3. You cannot delete the iSCSI target if there are any virtual disks associated with it, so you will need to remove all the iSCSI Virtual disks from Target3 first. 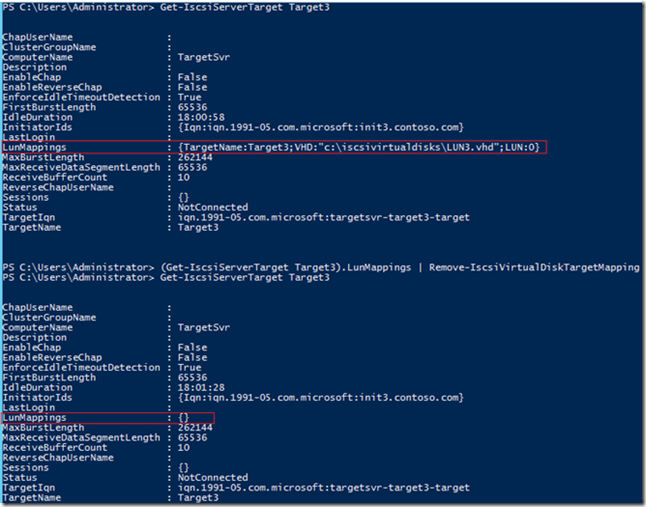 Check that Target3 has no iSCSI virtual disks associated with it. Now you can proceed with the next task to remove Iinit3 from Target3 before deleting the iSCSI target.


8. Delete all iSCSI initiators from a given iSCSI target 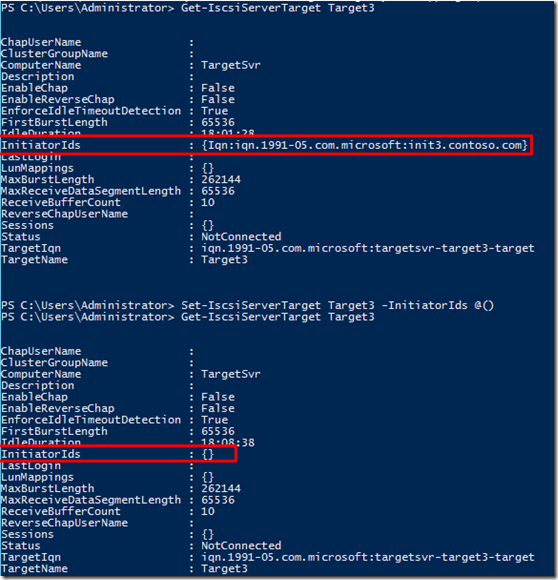 You can safely remove the iSCSI target by running:


Remove-IscsiServerTarget Target3
9. Delete all virtual disks which are not assigned to any iSCSI target


It’s a little tricky, so we list two different approaches:

In the last removal of the iSCSI virtual disk, you can also delete the VHD file by adding:


$AllDisks | where {$AssignedDisks -notcontains $_} |
foreach {Remove-IscsiVirtualDisk $_ ; rm $_ }
10.Get all iSCSI targets that have not been used for seven days


To see which iSCSI targets are not being used or connected to, we introduced a new parameter “IdleDuration” on the iSCSI Target object. This records the time since the last session was disconnected from an iSCSI target. In conjunction of the “LastLogin” parameter, you can get an idea of how long this target was in use versus not being used. In this example, I want to find all the targets which have been sitting idle for the past week:


Note that both “IdleDuration” and “LastLogin” are not persistent, so they will be reset if the iSCSI Target service was restarted.


The iSNS server registration can be done using the following cmdlets, which manages the WMI objects.


To add an iSNS server:


To delete an iSNS server:


I hope these examples give you some ideas on how piping can be used with iSCSI Target cmdlets. If you have questions not covered, please raise it in the comments, so I can address it with upcoming postings.