Turn on suggestions
Auto-suggest helps you quickly narrow down your search results by suggesting possible matches as you type.
Showing results for
Show  only  | Search instead for
Did you mean:
Introduction to Data Deduplication in Windows Server 2012
By


Hi, this is Scott Johnson and I’m a Program Manager on the Windows File Server team. I’ve been at Microsoft for 17 years and I’ve seen a lot of cool technology in that time. Inside Windows Server 2012 we have included a pretty cool new feature called Data Deduplication that enables you to efficiently store, transfer and backup less data.

This is the result of an extensive collaboration with Microsoft Research and after two years of development and testing we now have state-of-the-art deduplication that uses variable-chunking and compression and it can be applied to your primary data. The feature is designed for industry standard hardware and can run on a very small server with as little as a single CPU, one SATA drive and 4GB of memory. Data Deduplication will scale nicely as you add multiple cores and additional memory. This team has some of the smartest people I have worked with at Microsoft and we are all very excited about this release.

Hard disk drives are getting bigger and cheaper every year, why would I need deduplication? Well, the problem is growth. Growth in data is exploding so much that IT departments everywhere will have some serious challenges fulfilling the demand. Check out the chart below where IDC has forecasted that we are beginning to experience massive storage growth. Can you imagine a world that consumes 90 million terabytes in one year? We are about 18 months away! 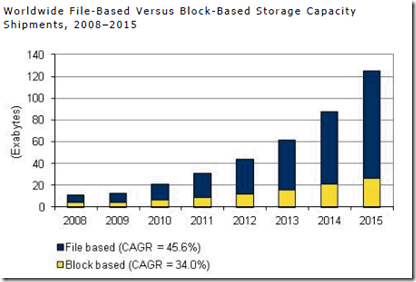 We analyzed many terabytes of real data inside Microsoft to get estimates of the savings you should expect if you turned on deduplication for different types of data. We focused on the core deployment scenarios that we support, including libraries, deployment shares, file shares and user/group shares. The Data Analysis table below shows the typical savings we were able to get from each type:

Microsoft IT has been deploying Windows Server with deduplication for the last year and they reported some actual savings numbers. These numbers validate that our analysis of typical data is pretty accurate. In the Live Deployments table below we have three very popular server workloads at Microsoft including:

Below is a screenshot from the new Server Manager ‘Volumes’ interface on of one of the build lab servers, notice how much data that we are saving on these 2TB volumes. The lab is saving over 6TB on each of these 2TB volumes and they’ve still got about 400GB free on each drive. These are some pretty fun numbers.

There is a clear return on investment that can be measured in dollars when using deduplication. The space savings are dramatic and the dollars-saved can be calculated pretty easily when you pay by the gigabyte. I’ve had many people say that they want Windows Server 2012 just for this feature. That it could enable them to delay purchases of new storage arrays.

1) Transparent and easy to use: Deduplication can be easily installed and enabled on selected data volumes in a few seconds. Applications and end users will not know that the data has been transformed on the disk and when a user requests a file, it will be transparently served up right away. The file system as a whole supports all of the NTFS semantics that you would expect. Some files are not processed by deduplication, such as files encrypted using the Encrypted File System (EFS), files that are smaller than 32KB or those that have Extended Attributes (EAs). In these cases, the interaction with the files is entirely through NTFS and the deduplication filter driver does not get involved. If a file has an alternate data stream, only the primary data stream will be deduplicated and the alternate stream will be left on the disk.

2) Designed for Primary Data: The feature can be installed on your primary data volumes without interfering with the server’s primary objective. Hot data (files that are being written to) will be passed over by deduplication until the file reaches a certain age. This way you can get optimal performance for active files and great savings on the rest of the files. Files that meet the deduplication criteria are referred to as “in-policy” files.

a. Post Processing : Deduplication is not in the write-path when new files come along. New files write directly to the NTFS volume and the files are evaluated by a file groveler on a regular schedule. The background processing mode checks for files that are eligible for deduplication every hour and you can add additional schedules if you need them.

b. File Age: Deduplication has a setting called MinimumFileAgeDays that controls how old a file should be before processing the file. The default setting is 5 days. This setting is configurable by the user and can be set to “0” to process files regardless of how old they are.

4) Focused on using low resources: The feature was built to automatically yield system resources to the primary server’s workload and back-off until resources are available again. Most people agree that their servers have a job to do and the storage is just facilitating their data requirements.

a. The chunk store’s hash index is designed to use low resources and reduce the read/write disk IOPS so that it can scale to large datasets and deliver high insert/lookup performance. The index footprint is extremely low at about 6 bytes of RAM per chunk and it uses temporary partitioning to support very high scale

c. Deduplication jobs will verify that there is enough memory to do the work and if not it will stop and try again at the next scheduled interval.

d. Administrators can schedule and run any of the deduplication jobs during off-peak hours or during idle time.

5) Sub-file chunking : Deduplication segments files into variable-sizes (32-128 kilobyte chunks) using a new algorithm developed in conjunction with Microsoft research. The chunking module splits a file into a sequence of chunks in a content dependent manner. The system uses a Rabin fingerprint -based sliding window hash on the data stream to identify chunk boundaries. The chunks have an average size of 64KB and they are compressed and placed into a chunk store located in a hidden folder at the root of the volume called the System Volume Information, or “SVI folder”. The normal file is replaced by a small reparse point , which has a pointer to a map of all the data streams and chunks required to “rehydrate” the file and serve it up when it is requested.

Imagine that you have a file that looks something like this to NTFS:

And you also have another file that has some of the same chunks:

After being processed, the files are now reparse points with metadata and links that point to where the file data is located in the chunk-store.

6) BranchCache™ : Another benefit for Windows is that the sub-file chunking and indexing engine is shared with the BranchCache feature . When a Windows Server at the home office is running deduplication the data chunks are already indexed and are ready to be quickly sent over the WAN if needed. This saves a ton of WAN traffic to a branch office.

Deduplication creates fragmentation for the files that are on your disk as chunks may end up being spread apart and this causes increases in seek time as the disk heads must move around more to gather all the required data. As each file is processed, the filter driver works to keep the sequence of unique chunks together, preserving on-disk locality, so it isn’t a completely random distribution. Deduplication also has a cache to avoid going to disk for repeat chunks. The file-system has another layer of caching that is leveraged for file access. If multiple users are accessing similar files at the same time, the access pattern will enable deduplication to speed things up for all of the users.

Even with RAID and redundancy implemented in your system, data corruption risks exist due to various disk anomalies, controller errors, firmware bugs or even environmental factors, like radiation or disk vibrations. Deduplication raises the impact of a single chunk corruption since a popular chunk can be referenced by a large number of files. Imagine a chunk that is referenced by 1000 files is lost due to a sector error; you would instantly suffer a 1000 file loss.

It slices, it dices, and it cleans your floors!

Well, the Data Deduplication feature doesn’t do everything in this version. It is only available in certain Windows Server 2012 editions and has some limitations. Deduplication was built for NTFS data volumes and it does not support boot or system drives and cannot be used with Cluster Shared Volumes (CSV). We don’t support deduplicating live VMs or running SQL databases. See how to determine which volumes are candidates for deduplication on Technet.

To aid in the evaluation of datasets we created a portable evaluation tool. When the feature is installed, DDPEval.exe is installed to the \Windows\System32\ directory. This tool can be copied and run on Windows 7 or later systems to determine the expected savings that you would get if deduplication was enabled on a particular volume. DDPEval.exe supports local drives and also mapped or unmapped remote shares. You can run it against a remote share on your Windows NAS , or an EMC / NetApp NAS and compare the savings.

I think that this new deduplication feature in Windows Server 2012 will be very popular. It is the kind of technology that people need and I can’t wait to see it in production deployments. I would love to see your reports at the bottom of this blog of how much hard disk space and money you saved. Just copy the output of this PowerShell command: PS > Get-DedupVolume