The iSCSI Target made its debut as a free download for Windows 2008 R2 in April 2011, since then, there were more than 60,000 downloads. That was the first step to make it available for everyone. Now in Windows Server 2012, no more downloads and separate installation; it comes as a build-in feature. This blog will provide step-by-step instructions to enable and configure iSCSI Target.


If you are not familiar with iSCSI Target, it allows your Windows Server to share block storage remotely. iSCSI leverages the Ethernet network and does not require any specialized hardware. In this release we have developed a brand new UI integrated with Server manager, along with 20+ cmdlets for easy management. The following references also provide additional examples/use cases:


Diskless servers can boot and run from the Microsoft iSCSI Software Target using a regular netw...


There are two features related to iSCSI Target:


· The iSCSI Target Server is the server component which provides the block storage to initiators.


The diagram below shows how they relate to each other:

The providers are for remote Target management. The VDS provider is typically installed on a storage management server, and allows user to manage storage in a central location using VDS. VSS provider is involved when application running on initiator is taking application consistent snapshot. This storage provider works on Windows Server 2012, for version support matrix, please go to the FAQ section.


iSCSI connection : iSCSI initiator makes a connection to the iSCSI Target by logging on to a Target. There could be multiple Targets on the iSCSI Target Server, each Target can be accessed by a defined list of initiators. Multiple initiators can make connections to the same Target. However, this type of configuration is only supported with clustering. Because when multiple initiators connects to the same Target, all the initiators can read/write to the same set of iSCSI virtual disks, if there is no clustering (or equivalent process) to govern the disk access, corruption will occur. With Clustering, only one machine is allowed to access the iSCSI virtual disk at one time.


IQN: It is a unique identifier of the Target or Initiator. The Target IQN is shown when it is created on the Server. The initiator IQN can be found by typing a simple “ iscsicli ” cmd in the command window.

Loopback: There are cases where you want to run the initiator and Target on the same machine; it is referred as “loopback”. In Windows Server 2012, it is a supported configuration. In loopback configuration, you can provide the local machine name to the initiator for discovery, and it will list all the Targets which the initiator can connect to. Once connected, the iSCSI virtual disk will be presented to the local machine as a new disk mounted. There will be performance impact to the IO, since it will travel through the iSCSI initiator and Target software stack when comparing to other local IOs. One use case of this configuration is to have initiators writing data to the iSCSI virtual disk, then mount those disks on the Target server (using loopback) to check the data in read mode.

All the iSCSI virtual disk, Target management can be done through this page.


Note : iSCSI initiator UI management is done by the initiator control panel, which can be launched through Server Manager:


Cmdlets are grouped in modules. To get all the cmdlets in a module, you can type


To use iSCSI Target end to end, cmdlets from all three modules will be used as illustrated in the examples below.


iSCSI Target can be enabled using Add roles and features in the Server Manager:

2. Select the server you want to enable iSCSI Target 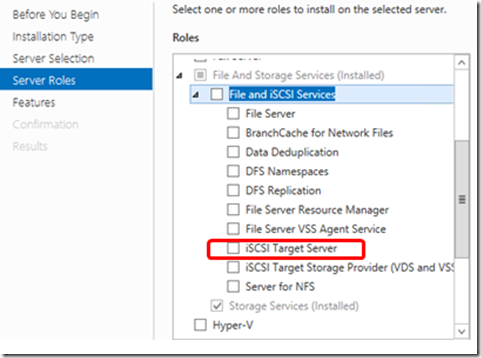 
Open the powershell cmdlet window, and run the following cmdlet:


Once the iSCSI Target role is enabled, Server Manager will have an iSCSI page:

The first wizard link is to create iSCSI Virtual Disk.

Once the wizard is completed, the iSCSI Virtual Disk will be shown on the iSCSI Page.

If you want to find all the iSCSI Virtual disks hosted on a volume, one simple way of doing this is to go to the Volume page, and select the volume. All the iSCSI virtual disks on that volume will be shown on the page: 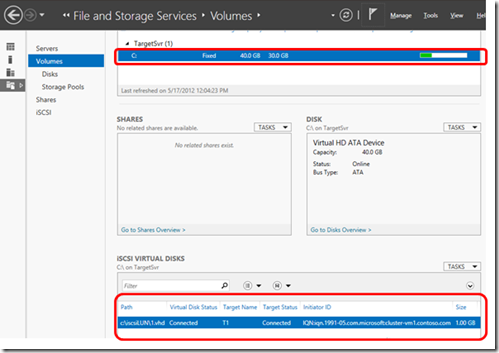 
Same configuration can also be automated using the cmdlet.


First parameter is the VHD file path. The file name must not exist. If you want to load an existing VHD file, use Import-IscsiVirtualDisk command. The –size parameter specifies the size of the VHD file.


The first parameter is the Target name, and the –InitiatorIds stores the initiators which can connect to the Target.


Once the iSCSI Virtual disk is created and assigned, it is ready for the initiator to logon.


1. The Target Server IP or hostname which was given to the initiator


2. The initiator IQN which assigned to the Target object. It is very common to have a typo in this field. One trick to verify this, is to assign the Target with “IQN:*”, which means any initiator can access this Target. It is not a recommended practice, but a good troubleshooting technique.


By default iSCSI initiator service is not started, the cmdlet will not work. If you launch the iSCSI initiator from the control panel, it will prompt for service start, as well as setting the service to start automatically.


For the equivalent using the cmdlet, you need to run

This is similar to the discovery in the UI.


2. Get the available Targets (this is optional):

If you want to connect all the Targets, you can also type:


4. Register the Target as Favorite target, so that, it will reconnect upon initiator machine reboot.


Once the connection is established, the iSCSI virtual disk will be presented to the initiator as a disk. By default, this disk will be offline,. For typical usage, you want to create a volume, format the volume and assign with a drive letter so it can be used just like a local hard disk.


You can right click on the disk to bring it online, but it is not necessary. If you run the new volume wizard, it will be brought online automatically.


From Server Manager->File and Storage Services->Volumes->Disks page, check the disk 2 is in offline mode:

Launch the New Volume Wizard, from


The following cmdlets are provided by the Storage module:


1. Check if the initiator can see the disk: Get-disk


5. Create a partition on disk 3 (To avoid a format volume popup in Windows Explorer, let’s not assign a drive letter at this time. We will do that after the volume is formatted)


If you have used previous release of the iSCSI Target, the most noticeable change in Window Server 2012 is the user experience. Some common questions are:


The installation might succeed, but you won’t be able to configure it. You need to uninstall the download, and enable the inbox iSCSI Target.


2. Trying to manage the iSCSI Target with the MMC snapin


The new UI is integrated with Server Manager. Once the feature is enabled, you can manage the iSCSI Target from the “iSCSI” tab page. Server Manager\File and Storage Services\iSCSI


3. How to get all the cmdlet for iSCSI Target?


Type “ get-command –module iscsiTarget” . The list shows all the cmdlets to manage the iSCSI Target.


Although most of the cmdlets do work, there are changes to the parameters which may not be compatible. If you run into issues with the cmdlets developed from the previous release, please run the get-help cmdname to verify the parameter settings.


Although most of the WMI classes are unchanged, some changes are not backward compatible. If you run into issues with the cmdlets developed from the previous release, please check the WMI classes and its parameters.


iSCSI Target doesn’t have the SMI-S support in Windows Server 2012.


iSCSI virtual disk stores data in a VHD file. This VHD file is compatible with Hyper-V, i.e. you can load this VHD file using either iSCSI or Hyper-V. Hyper-V in Windows Server 2012 has introduced a new virtual hard disk format VHDx, which is not supported by iSCSI Target. Refer the table below for more details:


If you have any questions about the cmdlet, type “ get-help cmdletname ” to learn the usage. Before you can use get-help, you need to run “ Update-help –module iscsTarget ”, this allows the help content to be downloaded to your machine. Of course, this also implies you will need internet connectivity to get the content. This is a new publishing model of the help content, which allows for dynamic update of the content.


iSCSI Target has made a few releases in the past, below shows the version numbers and the supported OS it runs on.


For each Target release, there is a corresponding storage provider package, which allows the remote management. The table below shows the interop matrix.


Storage space is a new feature in Windows 8 and Windows Server 2012, which provides storage availability and resiliency with commodity hardware. You can find more information about the Storage Spaces feature here . Hosting iSCSI virtual disks on Storage Spaces is supported.  Using iSCSI LUNs in a Storage Spaces pool is not supported. Below is a topology diagram to illustrate the two scenarios:


I hope this helps you get started using the iSCSI Target in Windows Server 2012, or make a smoother transition from the previous user experience. This blog only covers the most basic configurations. If you have questions not covered, please raise it in the comments, so I can address it with upcoming postings.