Backup and Restore of Server for NFS Share Settings

Backup and Restore of Server for NFS Share Settings


Windows Server 2012 ships with a rich set of PowerShell cmdlets to perform most of the Server for NFS share management operations. Using these cmdlets as building blocks, administrators can easily build backup and restore scripts for the NFS share settings and permissions that best suits their needs. This post demonstrates how Export-CliXml and Import-CliXml cmdlets can be used to backup and restore Server for NFS share settings.


Let us take a quick look at the Server for NFS share management cmdlets in Windows Server 2012. If you are not already familiar with these cmdlets please look at their help to get more details on using these cmdlets.


To export all the NFS shares on the server invoke Get-NfsShare and pipe the results to Export-CliXml cmdlet.

Running the above command saves only the share settings into the file. It does not save share permissions. Exporting share permission is covered in next section as the permissions are handled using another set of cmdlets.


The following share settings are exported to the file

To export a single share, use the following command. In addition you can also filter the shares that you want to save by using wild cards for the share name, path and network name. See Get-NfsShare help for more details on using it.


If you have an export file generated using the Export-CliXml containing the share configuration follow these steps to import them on Server for NFS running Windows Server 2012.


We have the choice of using either New-NfsShare or Set-NfsShare when performing the import operation. Use Set-NfsShare if the share already exists on the server and you would like to overwrite it with settings from the exported file.

The screen shot shows creation of new shares on the server after importing the shares from the export file.

If the shares already exist on the server, the settings of the shares can be restored to that of the export file by piping the output of Import-CliXml to Set-NfsShare cmdlet


Here is an example to show how this works. 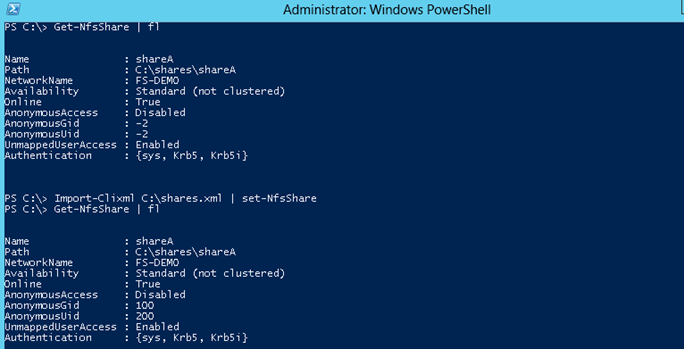 
Before we talk about importing share permissions let’s briefly look at the cmdlets that will be used to perform this operation.


Now let’s get back to importing share permissions from the file. If you have an exported file generated using Export-CliXml that contains the permissions for the shares, use this command to import those permissions.


The import command used above has following implications

Note: If you don’t want to retain existing share permissions on the share, remove them before importing from the file.


The exported file has


After the import operation, the share permissions for ShareA would be