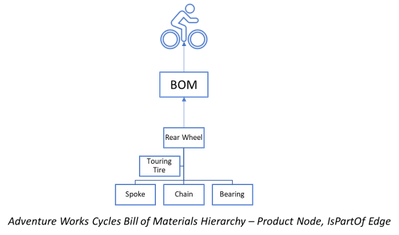 This all sounds very promising, but how can it be used for weighted paths, eg: distances on a map? It seems it is only useful for counting nodes, but not distances. Am I missing something?

@freom You cannot use this to calculate a weighted shortest path. But, you can store weights as edge properties/attributes and calculate the weight for the shortest path by distance using the aggregate functions (sum, in this case) over edge attributes.

sstefan
Occasional Visitor
@Shreya Verma Are there any plans to allow extra edge columns to be used in WHERE clauses? SHORTEST_PATH will not work properly if you have cycles in your graph and use an extra column (i.e. a column type) to differentiate between the different edge types (i.e. parent/child)
1 Like
Like

@Shreya Verma - Thanks for introducing to the new features from SQL Graph DB, I have been trying to use this in my latest project for storing hierarchy / tree structures where we join multiple individual hierarchies to create a combined tree structure with intersections at leaf levels from one or more hierarchies to store the Cartesian product by only creating a separate Edge Table to store that relationship, which is very powerful.

While working with my example of creating separate Edge Table to store  combined tree structure, I have observed limitations of SHORTEST_PATH, in my use case when we have multiple parent nodes for same child node, SHORTEST_PATH is not able to produce output from all possible child nodes, it will find path to the last node for only first iteration of Parent to Child, please see my example below

In this example I have 2 tree structures of "Region" and "Vehicles", purpose is to create "Sales by Region" hierarchy

When SHORTEST_PATH query is executed, I am expecting to get full path from all nodes of Region to all possible nodes of Vehicles, but the path stops at the first region of "Illinois" and does not show data for "Wisonsin"

Please suggest any corrections which can help generate full path  .. many thanks 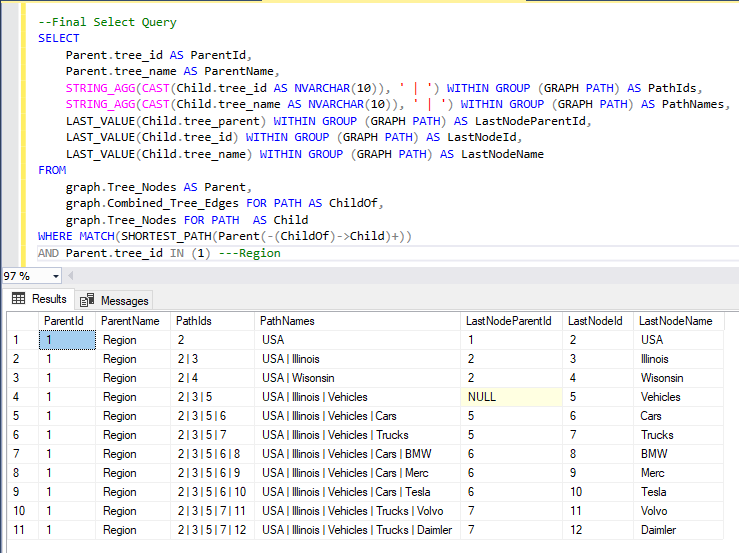 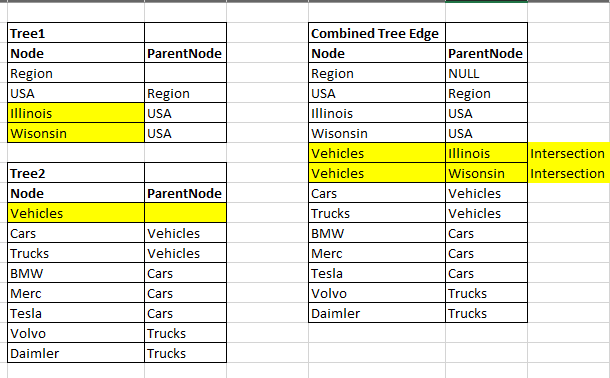 Thank you  @Shreya Verma, this is a great article and inspires hopes for using graph db for BOM traversing in SQL Server 2019.

However in all my testing it performed poorly comparing to using recursive-CTE-based tree explosion.

The execution times were 10 to 20 times longer, output Rows estimates 4 to 10 times worse, plan cost comparison always 0% for recursion and 100% for the graph query using SHORTEST_PATH().

Is this a known issue?

At this time it looks like Graph Db in SQL Server was created to support MATCH clause rather then improve performance of hierarchical data querying.

Can you recommend any remedies?

- I played with different indexing on the node and edge tables. An index on the edge ($from_id, $to_id) helps, but not dramatically.

- OPTION (HASH JOIN) helps when querying for All product trees, but not for One product tree.

The sample data I used had 5 levels of hierarchy.

@alex_io is it possible for you to share a reproduction? without looking at the query it is hard to tell why it is performing poorly for you.

I figured out my main mistake:
For the recursive explosion I, of course, filter the root records - because this is how you seed the recursive query.

For the Graph query I was not doing that.
When I added filtering of the roots, the graph query performance became very close to recursive, thou still worse.

My trees data has only about 1% or products/roots with more then 2 levels of hierarchy. So I suspect when I test with more levels of nesting for most of the data the performance of the graph queries may win.

Hi @Shreya Verma,
can you provide an example of Last_Node() concerning this explanation?
"More than one shortest path patterns are used in a query and one pattern begins at the LAST node of the previous pattern".
(from https://docs.microsoft.com/en-us/sql/relational-databases/graphs/sql-graph-shortest-path?view=sql-se...