Turn on suggestions
Auto-suggest helps you quickly narrow down your search results by suggesting possible matches as you type.
Showing results for
Show  only  | Search instead for
Did you mean:
The case of the filter predicate with window functions such as ROW_NUMBER and RANK
By

I recently helped troubleshoot a query performance issue that involved the window function "ROW_NUMBER". The running theory was that the query’s filter predicate should target the index resulting in a seek, but was instead applied via a Filter operator positioned at the top of the query plan. This led to a costly index scan and higher query duration.

While the actual use case was a bit more complicated, it can be repro'd using a trivial data set:

SELECT * FROM RN_View AS RN

Note the costly Index Scan, which eventually feeds to a Filter(Estimates versus Actuals available inline via SSMS v18.0:(

Instead of applying the predicate earlier in the execution, which would be optimal as it would reduce the output down to "1" row quickly, our predicate is instead being applied via the Filter operator "late" in the execution", after a costly scan operator: 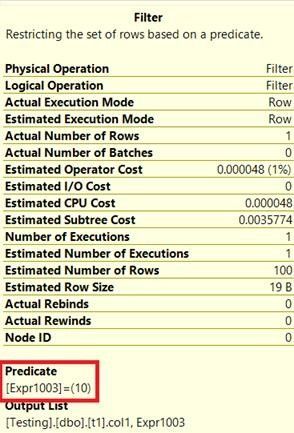 Let's try another test, in which we move the ROW_NUMBER function to the "base" query itself:

The plan has changed to a "fast" variation, in which the predicate was sent to the appropriate index, resulting in a seek. Also, it is important to note the result set has changed when compared to test #1.

So what happened in Test #1? Why can't the predicate drive an index seek like in Test #2?

The key factor here relates to when the Query Optimizer deems it safe, or not safe, to apply a predicate. Specifically, if the QO determines the result set requested by the T-SQL would change if the predicate was in fact applied at that point in the plan...

The View definition, AKA the T-SQL executed by the View, is basically considered a subquery by the Algebrizer. Each subquery has its own result set. If we execute the SELECT directly from the View definition, we receive a result set 10,000 rows with a sequential Row#, which were added by the ROW_NUMBER function(result set truncated to save blog space). 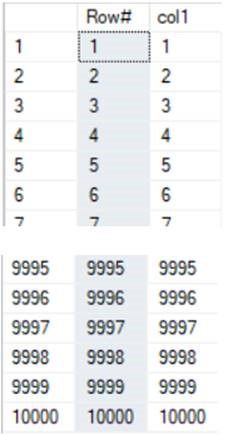 If we review the ROW_NUMBER definition, we can see why applying the predicate up front would not be a good idea:

Numbers the output of a result set. More specifically, returns the sequential number of a row within a partition of a result set, starting at 1 for the first row in each partition.

The "result set" requested by the View definition is not only 10,000 rows in length, but also adds the sequential numbering to each row. If the following query was allowed to generate a query plan in which the filter "10" was pushed down and applied early in the plan, the result set would be limited to only the first 10 rows. Hence, the result set would be different:

SELECT * FROM RN_View AS RN

This same scenario can be reproduced using a CTE:

The moral of the story is to always pay close attention to what your subquery's are asking for, especially when window functions such as ROW_NUMBER or RANK are used. The definition of said subqueries can change filter predicate location in query plans and significantly affect performance.