Turn on suggestions
Auto-suggest helps you quickly narrow down your search results by suggesting possible matches as you type.
Showing results for
Show  only  | Search instead for
Did you mean:
When do conversions generate conversion warnings? And why are these bad?
By

When do conversions generate conversion warnings? And why are these bad?


A few days ago a colleague asked me why was he seeing implicit conversions in the execution plan, but no warnings of such sort were being issued. Warnings are seen in the plan if the conditions they affect occur, and then are surfaced in the <Warnings> element of SHOWPLAN, either as affecting Cardinality Estimates and/or affecting the ability to Seek on an index.


Conversion related warnings are not exclusive to implicit converts. Any convert has the potential to spawn such warning. Warnings in the execution plan come from heuristics, and in the case of conversions, heuristics are set to fire the a conversion warning any time an existing convert * might * not preserve the order and thus affecting estimates, which in turn might affect the ability to seek, whether it is used in a predicate or not – although these will be more commonly seen in a search or join predicate.


Now, when referring to “order affecting conversions”, it becomes clearer that there is a connection between this concept, and conversions from string to numeric data types, or unicode to non-unicode strings, and why these would show up in SHOWPLAN as warnings. Let me to illustrate all of the above with a few examples.


As we can see in the plan below, executing the next query generates a warning, because there is a string to numeric conversion (explicit) in the s.SalesOrderNumber computed column. This column definition is (isnull(N'SO'+CONVERT([nvarchar](23),[SalesOrderID]),N'*** ERROR ***')), so it uses one of the columns in the join predicate. There are some implicit conversions going on in the plan, namely on d.LineTotal column, but these are not generating warnings, as they are not affecting estimations.

By removing the computed column s.SalesOrderNumber we avoid generating a warning as seen in the plan below, because the join predicate is not being converted to a string now, so it does not affect possible order and does not interfere with estimates. 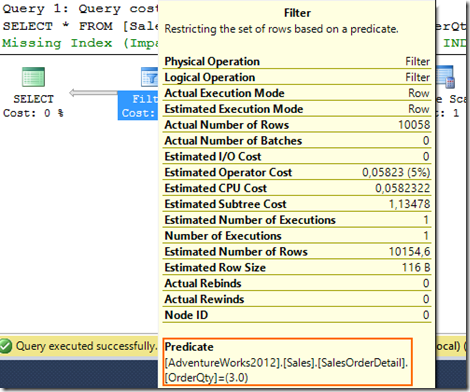 What if we were to add the following computed column to the table and use it in the query as a predicate?


We can see how the predicate changed, and is now using a scalar expression (conversion): 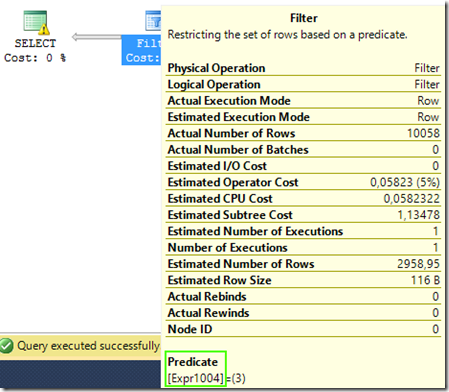 And how a warning is generated (actually more than that) as seen below:


- One for calculating the computed column used in the predicate (blue);

Now for a last example:


The predicate is a unicode string to numeric conversion – NationalIDNumber is an NVARCHAR(15) and the predicate is an integer – to see the rules of precedence when doing conversions, please refer to the BOL article on Data Type Precedence .


Therefore we have the cardinality estimation warning because the conversion affects ordering (blue), and in this case also a couple seekplan warnings because this conversion also affects the ability to seek - if we change the ID number to string, then we indeed would use a seek.

Let me wrap up with my general rule of thumb: generating a warning or not, implicit conversions are a sign of added cpu cycles and probably a poor design choice, either on the database level or just with coding (like poorly declared variables), so as a best practice I aim to remove these implicit conversions when I find them anyway – more so if they are generating warnings of course.


Hope this is useful. Until next time!