First published on MSDN on Aug 27, 2015
Entity Framework 6 was not designed from the start to work with the Always Encrypted feature of SQL Server 2016. However, a lot of effort has gone into making the feature work as transparently as possible with existing code. This article explores the limitations you will need to work around and the potential issues you should be aware of if you need to make your application based on Entity Framework 6 work with a database containing encrypted columns.

In order to create a new EntityDataModel: 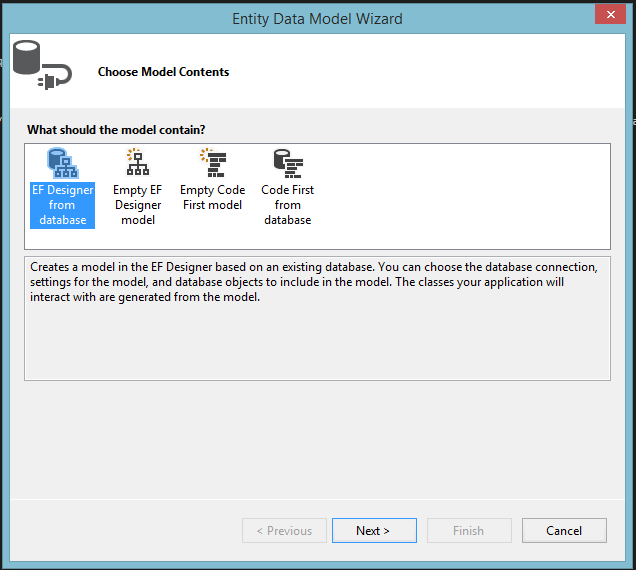 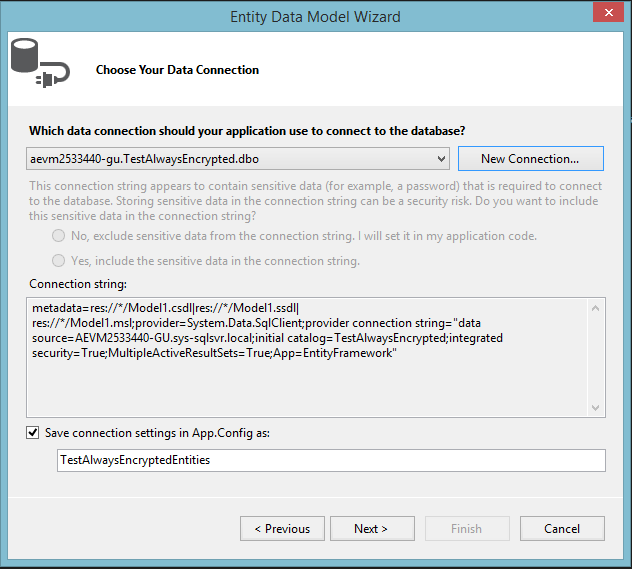 
Migrations will require substantial tweaking – Entity Framework is not aware of the Column Master Keys and Column Encryption and has no way to model them, so this needs to be compensated by user.


Example of the Up() migration method could look like this: 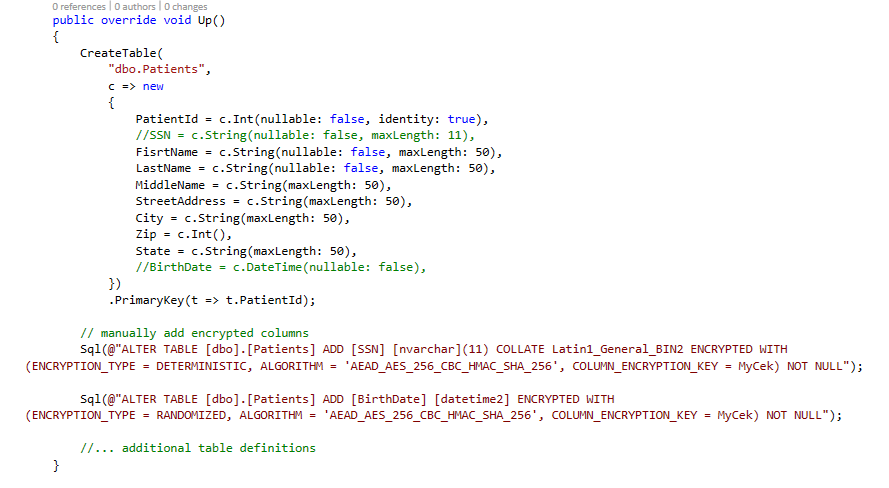 Automatic migrations should be disabled as it will always try to create columns without information about encrypted columns. They can be disabled using the following code snippet:
public sealed class MyConfiguration : DbMigrationsConfiguration<AlwayEncryptedContext>
{
public MyConfiguration()
{
AutomaticMigrationsEnabled = false;
}
}


Database Initializers will not be supported with Always Encrypted feature. EF has no way of modeling the encryption related concepts, and there is no good/easy way to inject custom SQL into the initializer pipeline. The exception is MigrateDatabaseToLatestVersion , which uses Migrations to perform initialization. In general, it is recommended to use Migrations over Initializers when working with encrypted columns. This includes seeding the database with initial data. Migration’s Configuration.Seed method can be used for that purpose.


Similar to Migrations, this requires user to create database manually. Users can create EF model using designer. EF will then create a DDL statements that should be manually tweaked to include column encryption. CMK and CEKs should be created separately as well. 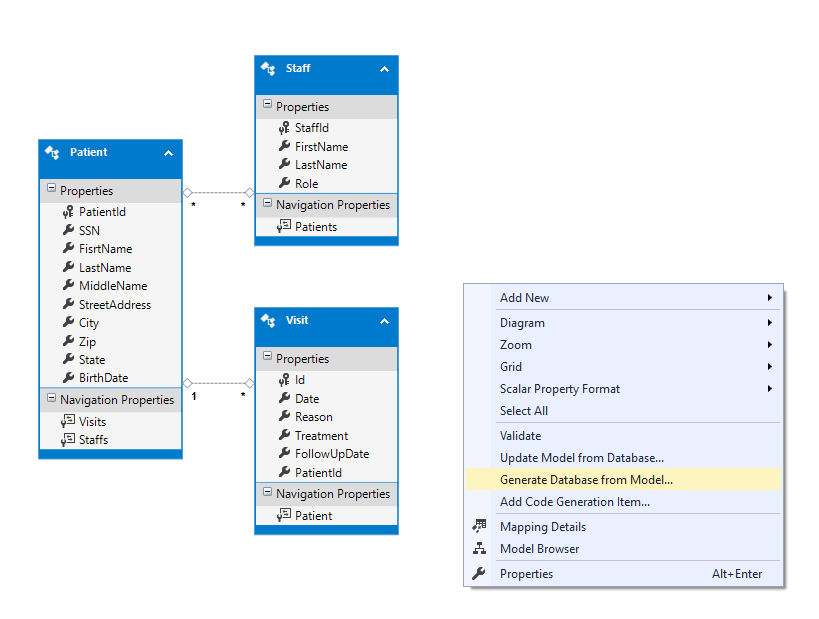 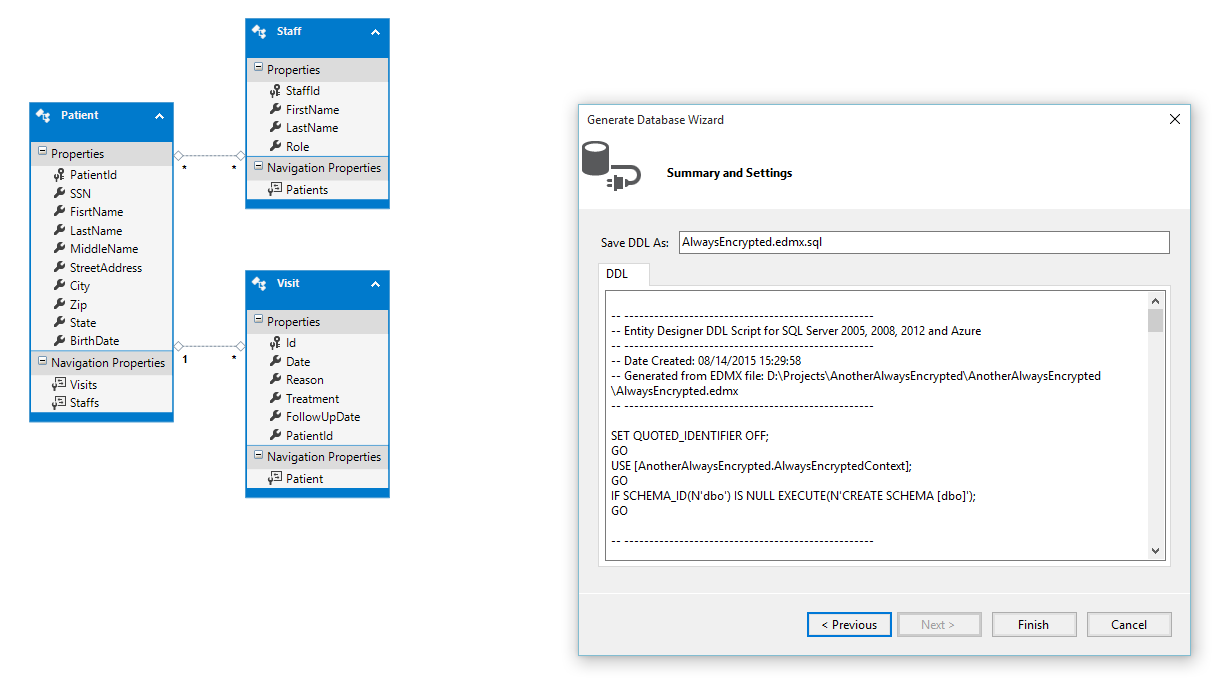 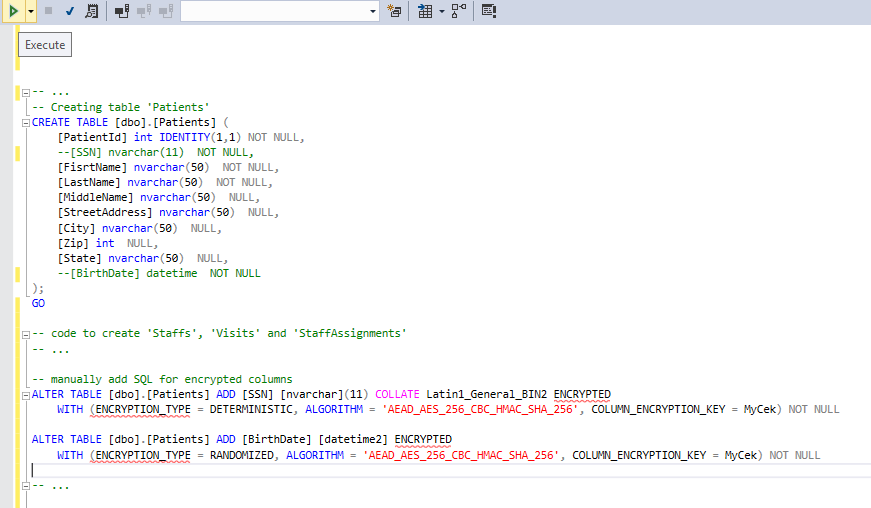 
In order to allow querying, connection string that is being used need to be modified by adding:
Column Encryption Setting=Enabled

Querying over tables with encrypted columns


Entity Framework assumes order-comparability of PKs in many cases. If PK is encrypted, some scenarios will not work.

Also EF will sometimes print values of the Entity key in exception messages. This could cause sensitive information to be leaked to inappropriate parties.

This issue is being tracked by EntityFramework team here:

Until this is fixed, it is recommended to use unencrypted surrogate keys if possible.

Filtering over an encrypted column


EF query will fail if we compare encrypted column to a constant, e.g.:
context.Patients.Where(p => p.SSN == "123-45-6789");
This is because constants are translated to literals in the query.

EF can transparently replace constants in the query with parameters. This can be achieved using query interception extensibility features.

AlwaysEncryptedSample.cs (attached at the end of this blog post) illustrates how this can be done.

Sorting over an encrypted column


Sorting based on encrypted column is not supported on the database due to limitations of Always Encrypted feature.

Grouping over an encrypted column


Some GroupBy operations are not supported (namely the LINQ specific grouping, without projecting group key or aggregate function) if entity key is encrypted. Reason is that those queries (that simply aggregate elements into IGrouping<,> statements) are translated into TSQL containing ORDER BY operation on the key. If the key is encrypted, the query will fail.

Queries that produce GroupBy in relational sense (projecting aggregate function over elements, or projecting group key itself will be translated into TSQL GROUP BY operation, and are working properly without additional customization.


Queries that project a collection don’t work with encrypted columns if the key (or any part of the composite key) is encrypted, e.g.:
context.Customers.Select(c => c.Orders);
will not work if PK of the Customer entity is encrypted. This is because (similarly to some group by operations) EF introduces ORDER BY clause to the query.


Including collection in query results


Similarly to the above case, Include operation performed on a collection is not supported if the PK of the principal entity is encrypted, e.g:
context.Customers.Include("Orders");
Suggested solution:

[11/13/2015] Update: If you are interested in using Azure Key Vault for this demo instead of the certificate provider, please remember that you will need to register the provider in your code as explained in http://blogs.msdn.com/b/sqlsecurity/archive/2015/11/10/using-the-azure-key-vault-key-store-pro... .