This blog post drills down on all related monitoring metrics including performance counters and XEvents, and provides guidelines on how to utilize them to troubleshoot the root cause of the performance issue.

All the metrics explained below are listed as per the following log block movement sequence:

1.      A transaction is initialized in a primary replica


Some of the performance counters included below are applicable to both the primary and secondary, and hence are included twice in the list below.

In Perfmon, except "Log Bytes Flushed/sec" and "Log Pool LogWriter Pushes/sec" which is in SQLServer:Databases object, all other counters are in the SQLServer:Availability Replica object.


There are a few performance counters in " Network Interface " object can be used for network performance monitoring:

It will be useful to capture extended events and correlated them by common field(s) to track a single block log movement in the whole data flow. It will provide details for identifying which stage took most of time and narrowing down the root cause analysis scope.

Below is a list of extended events that can be evaluated for investigating performance issues related to high HADR_SYNC_COMMIT.

*Regarding the comment "Need to choose the immediate next log_block_id of this database" for hadr_send_harden_lsn_message and hadr_receive_harden_lsn_message, it is because the ChangeApply side always returns a hardened lsn which is one block less than the currently received log block lsn. To ensure the primary replica received the expected hardened LSN from synchronous-commit secondary replica, the immediate next log block lsn is needed to trace the complete end-to-end logic flow for eventually reaching hadr_db_commit_mgr_harden.

To trace these, two XEvent queries are needed:

1.      Get the immediate next log block lsn which is greater than the value in property "wait_log_block" of Xevent hadr_db_commit_mgr_harden

Query in secondary replica (because that the max size of a log block is 60KB, and 1 log block unit represents 512 bytes, the [next log_block_id] will not be 120 more than the current log_block_id) 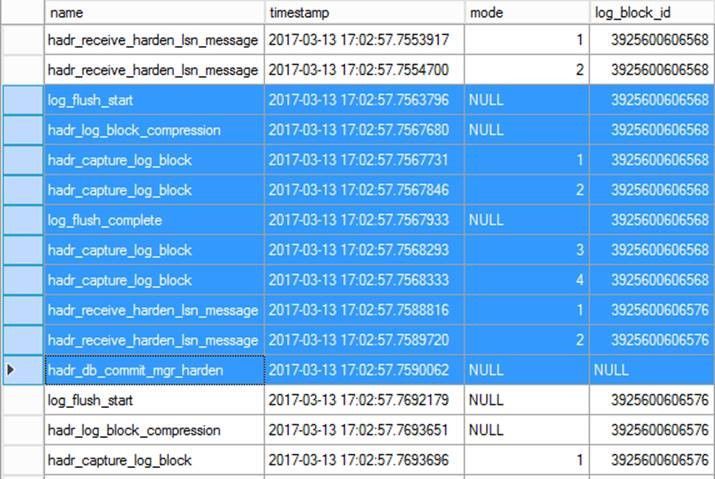 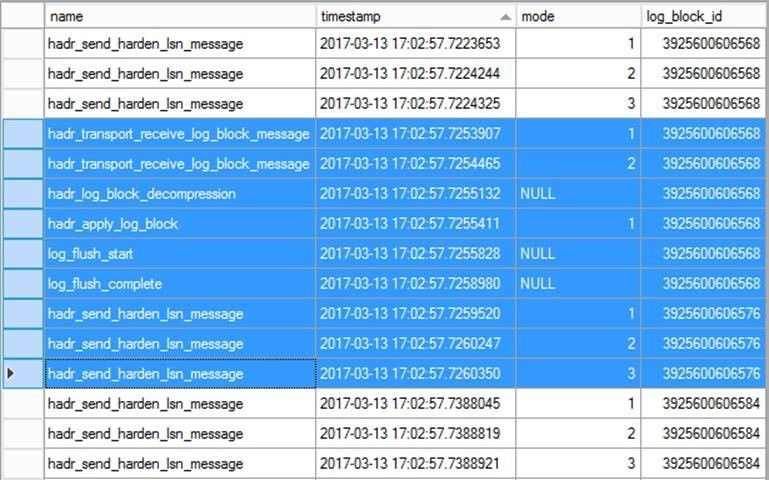 Based on the "wait_log_block" value in a hadr_db_commit_mgr_harden, the full timeline of this log_block data movement sequence can be tracked back following above table by combining the captured Xevents from primary replica and all synchronous-commit secondary replicas.

Optionally, the "database_id" and "ag_database_id" (which is database replica id in AG) can be combined with "wait_log_block" for the related Xevent logs lookup.

In addition, the mapping among database_id, ag_database_id and replica_id can be found from the output of sys.dm_hadr_database_replica_states.


There are multiple possible reasons to cause HADR_SYNC_COMMIT to be unusually long. With above performance counters and XEvents, it is possible to narrow down the root cause. If none of the resources has performance issue, please involve Microsoft Customer Support Team for further investigation


With AG Xevents, the duration between log_flush_start and log_flush_complete for the same log_block_id in the secondary replica should be long when there is a disk IO issue. Another way to look for this value is to check value (in millisecond) of property "duration" in log_flush_complete.


When a secondary replica of an AG has compatible hardware configuration as the primary replica, and its host computer is for this AG only, it is not expected to see Secondary replica hit CPU issue. But it is possible when there is a heavy reporting workload on a read-only enabled secondary replica.


After rooting out the disk IO and high CPU as the root cause of long HADR_SYNC_COMMIT, network performance needs to be checked.

With the "Network Performance Counters" mentioned above, the first thing is to check if "Bytes Total/sec" is close to "Current Bandwidth"/8 for the related Network Adapter in primary replica and all synchronous-commit secondary replicas. When any replicas show this situation, it means this network adapter has reached its network throughput capacity.