SQL Server has the ability to execute queries using multiple CPUs simultaneously.  We refer to this capability as parallel query execution.  Parallel query execution can be used to reduce the response time of (i.e., speed up) a large query.  It can also be used to a run a bigger query (one that processes more data) in about the same amount of time as a smaller query (i.e., scale up) by increasing the number of CPUs used in processing the query.  For most large queries SQL Server generally scales linearly or nearly linearly.  For speed up, this means that if we double the number of CPUs, we see the response time drop in half.  For scale up, it means that if we double the number of CPUs and the size of the query, we see the same response time.


When is parallelism useful?


Parallelism is primarily useful on servers running a relatively small number of concurrent queries.  On this type of server, parallelism can enable a small set of queries to keep many CPUs busy.  On servers running many concurrent queries (such as an OLTP system), we do not need parallelism to keep the CPUs busy; the mere fact that we have so many queries to execute can keep the CPUs busy.  Running these queries in parallel would just add overhead that would reduce the overall throughput of the system.


How does SQL Server parallelize queries?


SQL Server parallelizes queries by horizontally partitioning the input data into approximately equal sized sets, assigning one set to each CPU, and then performing the same operation (e.g., aggregate, join, etc.) on each set.  For example, suppose that we want to use two CPUs to execute a hash aggregate that happens to be grouping on an integer column.  We create two threads (one for each CPU).  Each thread executes the same hash aggregate operator.  We might partition the input data by sending rows where the group by column is odd to one thread and rows where the group by column is even to the other thread.  As long as all rows that belong to one group are processed by one hash aggregate operator and one thread, we get the correct result.

This method of parallel query execution is both simple and scales well.  In the above example, both hash aggregate threads execute independently.  The two threads do not need to communicate or coordinate their work in any way.  If we want to increase the degree of parallelism (DOP), we can simple add more threads and adjust our partitioning function.  (In practice, we use a hash function to distribute rows for a hash aggregate.  The hash function handles any data type, any number of group by columns, and any number of threads.) 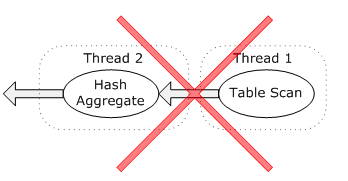 Who decides whether to parallelize a query?


Who decides the degree of parallelism (DOP)?


The DOP is not part of the cached compiled plan and may change with each execution.  We decide the DOP at the start of execution by considering the number of CPUs on the server, the “max degree of parallelism” and “max worker threads” sp_configure settings (only visible if the “show advanced options” setting is on), and the query MAXDOP hint if any.  In short, we choose a DOP that maximizes parallelism while ensuring that we do not run out of worker threads.  If you choose MAXDOP 1, we remove all parallelism iterators and run the query as a serial plan using a single thread.