Transparent Data Encryption (TDE) is a mechanism in SQL Server to secure the data and log files at rest by encrypting them using a key/certificate. Many customers use this feature to protect their data against security threats. Other than knowing that this feature encrypts the data, there are other aspects that would really be useful for you to aware of. Especially about how it may impact your OLTP workload, disk, memory and other things. So, let’s dig straight in.

As a rule of thumb, keep in mind that

To achieve (1), we start something called a TDE Encryption Scan. More on this shortly.

To achieve (2), any write to disk during a flush (For example, any form of checkpoint, page evicted from Buffer Pool etc) will be encrypted before the page is written to disk. Before any flush, we see if TDE Encryption is enabled on the database, and if so, we encrypt before we write. As simple as that.

Now, once encryption is turned ON for a database, all the existing user data on the data files should be encrypted. To do this, SQL Server starts something called a TDE Encryption Scan. It is basically a scanner, which goes through each page of each data file to ensure its encrypted. When the scanner completes its scan across all the files, that’s when we say that the database is ‘encrypted’. How the TDE Encryption scan works is crucial because of the effects it can have on the user workload. Let me explain.

Consider a database contains 10 data files, each 100 GB. That’s ~1TB of data. When user turns ON encryption, the goal is to encrypt all this 1TB of data on disk. Now, as soon as encryption is turned ON, we mentioned that any write or flush that happens to disk will be encrypted before the flush. SQL Server utilizes this and the TDE Scanner is built around this concept. Below chart explains how a TDE Encryption scan works. 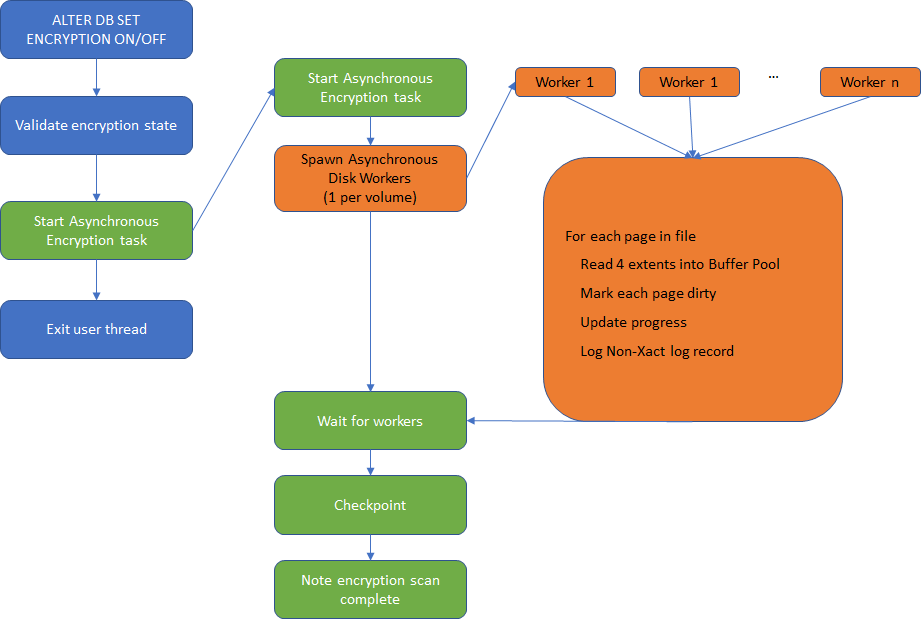 How many Asynchronous Disk Worker threads are spawned? 1 per volume. i.e., If there are 10 data files on 10 different volumes, then 10 workers, and if 10 data files on same volume, then just 1 worker. This is to minimize the impact of the TDE Encryption scan on the disk. For simplicity, lets consider there is 1 thread per data file. What does the Asynchronous Disk Worker do? It just loops through each page of the file (Each page is 8KB), reads it into the memory (In batches of 4 Extents or 32 Pages) and marks them dirty. It also creates a log record (to be replayed in secondary). Simple right? So, where does the encryption occur? Remember that we encrypt pages only during flush? Once all the Asynchronous Disk Workers dirty all the pages of all data files, the Asynchronous Encryption worker who is waiting for these workers to finish, performs a checkpoint which will encrypt all the dirty pages and flush them to disk. This is when all the pages of the database are fully encrypted.

We have multiple workers dirtying each page while checkpointing performs the encryption. For this to happen,

The exact same operations happen when an encrypted database is decrypted, or an encryption key is rotated as well. Except during decryption, the pages are not encrypted on flush. The scanner performs the exact same job of dirtying each page of the database.

How do we manage the resources?

The DMV sys.dm_database_encryption_keys surfaces information like the encryption_state, encryption_scan_state etc which can also be very useful to know what the scanner is doing at any point in time.