-       Can be configured to use a subset of the CPUs presented by the OS from the same memory node.

For example: A memory node with 64 CPUs is a complete, Operating System, scheduler group.  SQL Server may choose to divide the memory node allowing for better partitioning and performance.  The Soft Numa feature may take the 64 CPUs and create 8 scheduler nodes, each managing 8 CPUs or 4 scheduler nodes managing 16 CPUs, etc.  The decision is performance driven. 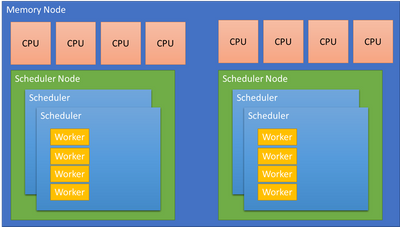 The SQL Server schedulers can be online or offline.

The SQL Server schedulers can be visible or hidden.

In SQL Azure the SQL Server may be executed under the control of a Windows Job Object.   The job object can be configured to limit the resource usage on the system, including which nodes and CPUs the processes started under its control may utilize.

For example: A smaller sized, SQL Azure database, using 2 CPUs, could be assigned to CPU 2 and 3 on the host machine.  For this example, assume the host machine is single node, 8 CPU system.  The affinity mask for the job would be 00001100 indicating CPU 2 and3 are to be used for processes running in this job context.  The sys.dm_os_schedulers would show 8 schedulers but only schedulers 2 and 3 are set to visible, online and the other scheduler are set to visible, offline.  If the job configuration is changed to use CPU 0 and 1 ( 00000011) and SQL Server brings scheduler 0 and 1 online and takes scheduler 2 and 3 offline.

Refer to the SetThreadAffinityMask /  SetThreadGroupAffinity APIs for more details as well as Processor Groups.

The affinity mask values can be viewed using the sys.dm_os_threads and sys.dm_os_nodes DMVs and altered using the ALTER SERVER CONFIGURATION statement.

-      Auto Affinity: The thread affinity should match the online scheduler mask (underneath Operating System can schedule the thread on any core of the NUMA node)

-       Manual Affinity: The thread affinity should be a single CPU.

-       NO_AFFINITY: The value should be 0 to indicate that affinity has not been set on the thread and the OS/Job controls the scheduling behavior.  (Note: Currently a bug in the DMV incorrectly reports an affinity mask value)

Hidden schedulers are used for background processing such as backups and the affinity settings are treated as AUTO mode.  Any CPU for the assigned scheduling node can be used by the hidden scheduler workers.

Which requests are using which scheduler / CPU?

You can use queries like the following example to cross reference executing queries to the scheduler/CPU being used.