Turn on suggestions
Auto-suggest helps you quickly narrow down your search results by suggesting possible matches as you type.
Showing results for
Show  only  | Search instead for
Did you mean:
Feature Engineering using R
By

First published on MSDN on Mar 23, 2017
Feature Engineering is paramount in building a good predictive model. It's significant to obtain a deep understanding of the data that is being used for analysis. The characteristics of the selected features are definitive of a good training model.

Why is Feature Engineering important?


This blog aims to go through a few well-known methods for selecting, filtering or constructing new features in a quick R way as opposed to helping you understand the theoretical mathematics or statistics behind it. Note that this is by no means an exhaustive list of methods and I try to keep the concepts crisp and to the point.

How to categorize Feature Engineering? Here I approach them as the follows:


For most of the examples, the default data set in R is used. To quickly list all the data sets available to you from R:
> data()

We will either use mtcars or iris data sets for most of the examples. As most of these data sets are very small, some of the below examples could exhibit over-fitting, fixing it is not in the scope of this blog.

Feature set of iris and mtcars:


Filter methods are used to select a subset of the existing features based on certain criteria. Features chosen by filters are generic to the feature variables and are not tuned to any specific machine learning algorithm that is used. Filter methods can be used to pre-process the data to select meaningful features and reduce the feature space and avoid over-fitting, especially when there is a small number of data points when compared to the number of features.
Correlation coefficients
Correlation coefficient is a score that helps to understand the dependence and relationship between two variables, say X and Y. It's helps filtering features that could be duplicates - if it has a strong correlation to other features and also picking features that are correlated to the response variable.

Most commonly used method is Pearson's Correlation Coefficient that is used to score linear dependence between two variables. The mtcars contains data about 32 cars including features like miles/gallon, weight, gross horsepower, etc. Let's use Pearson's method to understand the relationship between mpg and car weight. 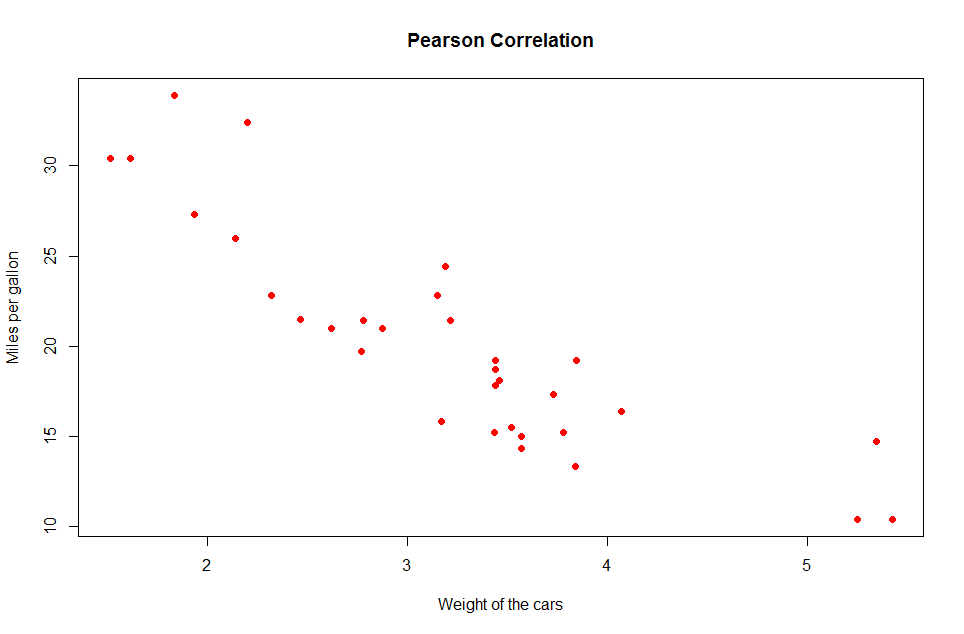 You could also plot(mtcars) or cor(mtcars) to obtain the value and plot for all the possible correlations. To simplify just a subset of the features, you could use:
pairs(~mpg + disp + wt + cyl, data=mtcars, main=”Scatterplot Matrix”) 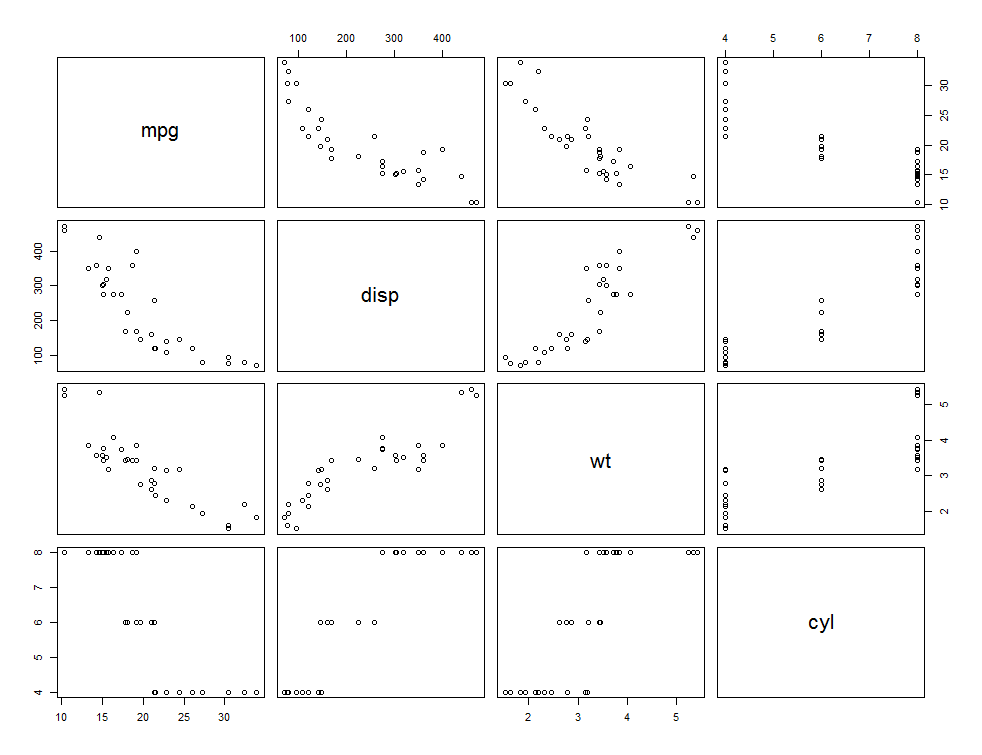 Mutual Information
Mutual Information of the predictors and the response variable (or the class) calculates how important the inclusion or exclusion of that particular feature is in predicting the correct class. It estimates the 'amount of information' that is shared between two random variables say X and Y. So knowing X, would reduce the uncertainty of Y. It helps determine which feature among a given feature vector is most useful in determining the response variable.
MI uses the probability distribution of the variables unlike Correlation and is not limited to understanding linear dependencies. After gathering the mutual importance of a feature, eliminating non informative features and retaining the important features could potentially reduce noise and help accuracy.


Another common attempt to perform Feature Selection is by using Wrapper Methods.

When thinking of which features could matter to our model, an intuitive approach that might have crossed your mind is observing the model's accuracy for all combination of features. This 'brute-force' method, depending on the size of the data set might demand enormous computation time and space.

Greedy search strategies could be devised to solve this problem. This is a extensively researched subject but for the limited scope of the blog we will keep it succinct.

An easy approach would be to evaluate the feature individually and select top N features that score good accuracy.
However, testing the model repeatedly with only one of the features at a time, we will miss out on the information that would be obtained from the feature dependencies. So this might be naïve.
Forward Selection:
This is a simple greedy algorithm where you start with a feature set of just one feature and sequentially add the next best feature (from highest performing feature in the previous approach) and update the model continuing to observe the model performance. This method would be tedious when your feature space is large and it does not account for features that were already added to the feature set that are probably degrading the performance of the model.
Backward Selection:
Backward Selection is the reverse approach of the Forward Selection, wherein we start with all the features and then iteratively remove the least performing feature while updating the model. This would help understand if the least ranked feature was indeed useful.

Caret package in R has a function called Recursive Feature Elimination (rfe) that does this. 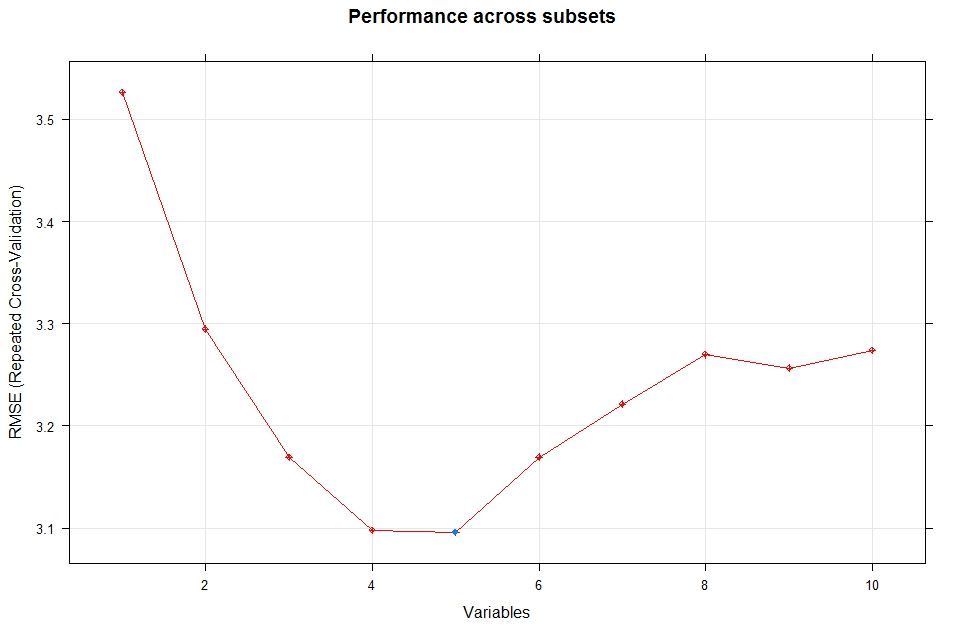 
Sometimes based on the domain knowledge you have about the data, it might be helpful to manually construct features from existing features. This could be - aggregating a set of features into one column, splitting a feature into multiple features, using frequency of certain columns as a feature, deconstructing dates to represent number of days from a reference point, creating binary features, etc.

If some of the numerical features have a large range, scaling methods can be applied to shrink them into a smaller range. Scaling features could help to implicitly ensure the features are weighed equally.
R has inbuilt function called scale() that is used for this purpose.
> range(CO2$conc)
[1] 95 1000
> scaled_conc <- scale(CO2$conc)
> range(scaled_conc)
[1] -1.148943 1.909273
Feature Construction is especially important when dealing with Computational Linguistics. Textual Information needs to be transformed into vectors, that the model would understand.

MicrosoftML has a function called featurizeText() that allows you to specify the number of n-grams, if you want to remove stop words, etc. and creates a transform object that could then be used while modelling. Refer to 'Train Models' section in here for an example.
Dimensionality Reduction:
A feature set space could be reduced by projecting it to a lower dimensional feature sub space by using only principal components as features. Principal components are combinations of the input features, so picking the top N PCs could explain a big percentage of the variance in the data set. This is important when dealing with the 'curse of dimensionality' where for a given set of data, there could be X number of features above which the performance of the model would start to deteriorate rather than improve. So essentially we would want to reduce the number of features retaining the variance that most of the features can explain.
One straight-forward way to deal with this problem, is combining existing features to reduce the feature set. Another way is by combining information about certain features into a new feature set without losing information using PCA or LDA.

Principal Component Analysis (PCA):
PCA is an interesting and an extensively researched method for reducing the dimensionality of feature set. It performs a linear mapping of the features into a lower dimensional space maximizing the variance of the data without using the response variables' information.

Notice that the first PC is highly correlated with cyl, disp, wt and hp whereas PC2 is highly correlated with qsec and gear.
PC1 will give you the direction that has the highest variance so as much information about the dataset is retained. Mathematically, this means that the eigenvector (direction) with the highest eigenvalue (variance) for those data points gives you the first Principal component. The second is the Principal Component that is next highest in variance that is orthogonal to the first PCA and so on.

prcomp() function uses Single value decomposition of the centered data matrix for it's calculation. However, to calculate the PCA values using the eigenvalue decomposition of a covariance matrix instead - you use rxCovCor function in Microsoft R Server to calculate the covariance matrix of the data and pass this as an input parameter to princomp(). The difference between prcomp() and princomp() is the method they use to calculate PCA. Check this This article for a good explanation and example of using covariance matrix for PCA.
#Use Biplot to visualize the first two principal components:
biplot(mtcars.pca_model, scale = TRUE, pc.biplot = TRUE) 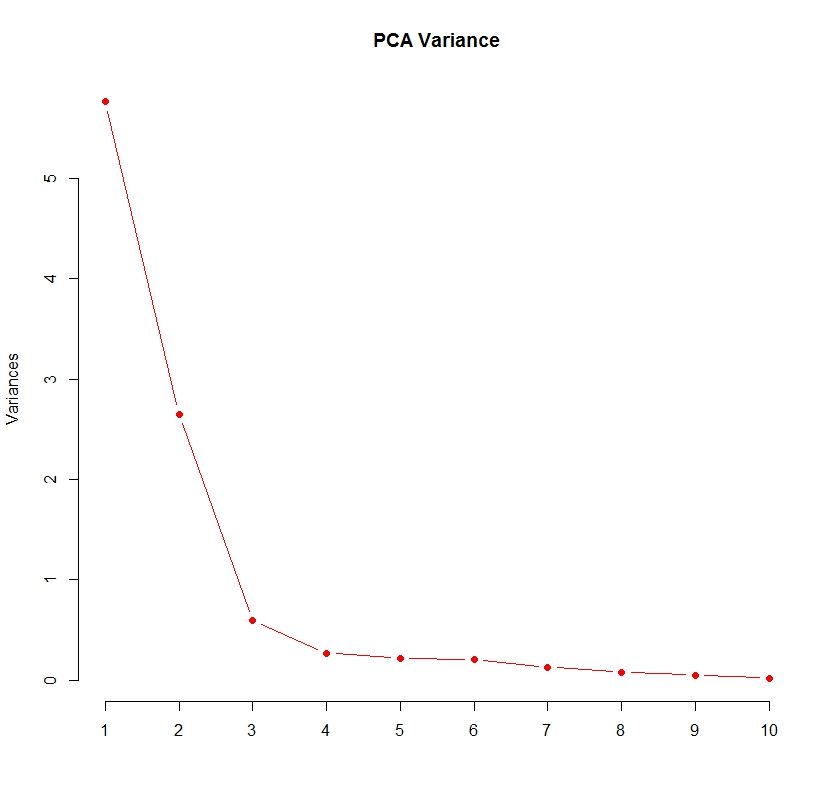 X-axis here represents each of the PCs ranked by their variance. The PCs could be used as features for predicting miles per gallon for our regression analysis. Notice that obtaining PCs are independent of the labels.

While PCA can be applied to unlabeled data, Linear Discriminant Analysis or LDA is specifically used to find linear combination of features taking into account the classes of the data. The goal here is to maximize the separation between the mean of the classes and minimize the total squared deviation from the means of the individual classes. While PCA retains the variance of all the features while picking the principal component, LDA tries to retain the variance between the features in one class.
Let's use the iris data to understand what LDA is. 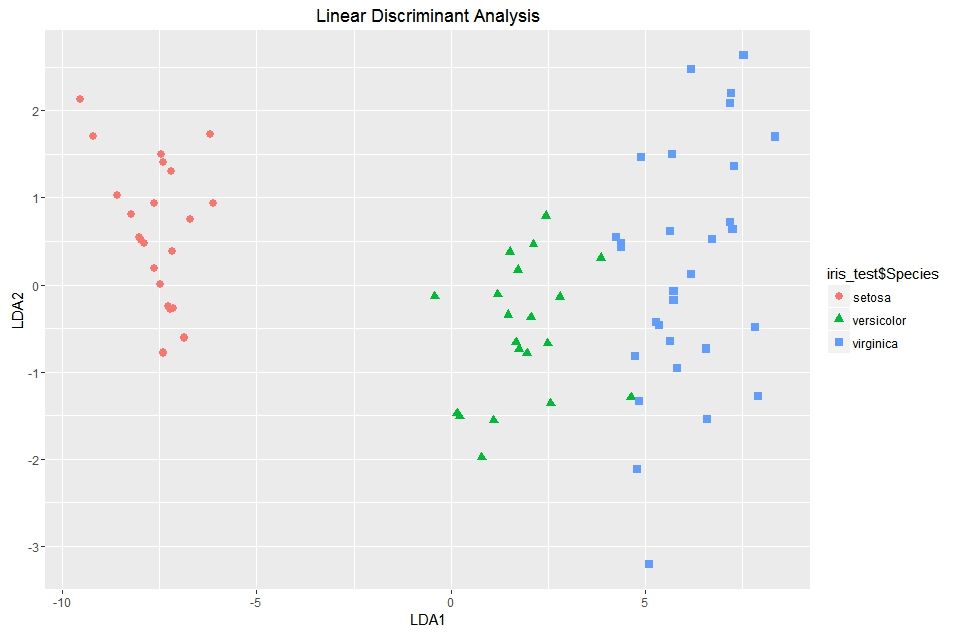 Clustering is the method of reducing the dimensionality of the data in an unsupervised manner.  This could be done by generating clusters using k-means or other techniques and replacing the features that form a cluster with that cluster's centroid.


To summarize, it's important to spend time extracting, selecting and constructing features based on your data and it's size. It will be valuable in improving the performance of your model. Some features could be selected from a given feature set based on correlation with other predictors or with the label. If you have a small set of features, a quick brute-force approach of attempting different combinations might give you the best set of predictors. If you have a huge feature set especially when compared to the total number of data points - exploring dimensionality reduction techniques or other methods to combine multiple features together might be of help. But ultimately, though some of the methods above would help pick features, it's up to you to evaluate their value in being good predictors.