These two requirements are closely related and have a common solution when it comes to SQL Server system administrator (sysadmin) privileges:


If you're wondering if a DBA only has access through a group account, will that affect auditing? After all, DG041 requires the ability to track individual users, and DG0060 requires that actions through shared accounts must be attributable to individual users. Not to worry, traces and audits will still record the individual user account, even if they're only able to login through a Windows group-based login. Want to see for yourself? Just make sure your individual account isn't used as a SQL Server login, start a T-SQL trace in Profiler, and run a query. You'll see your individual account in the results, not the group you're logged in through. There's still a reason why your SQL Server instance is likely to need individual logins, however. Can you guess why? Because SQL Server logins based on Windows groups can't be owners of objects, such as as databases. For top security, logins being used as object owners will have less permisions than sysadmin.


Now suppose you have your new sysadmin group and you're installing a new instance of SQL Server 2008. Once you get to the Database Engine Configuration screen (fig. 1), don't click the "Add Current User" button like most DBA's would. Instead you click the "Add..." button, and add the Sr. DBA domain group, and you'll avoid having to make changes later to comply with DG0116 and DG0121. 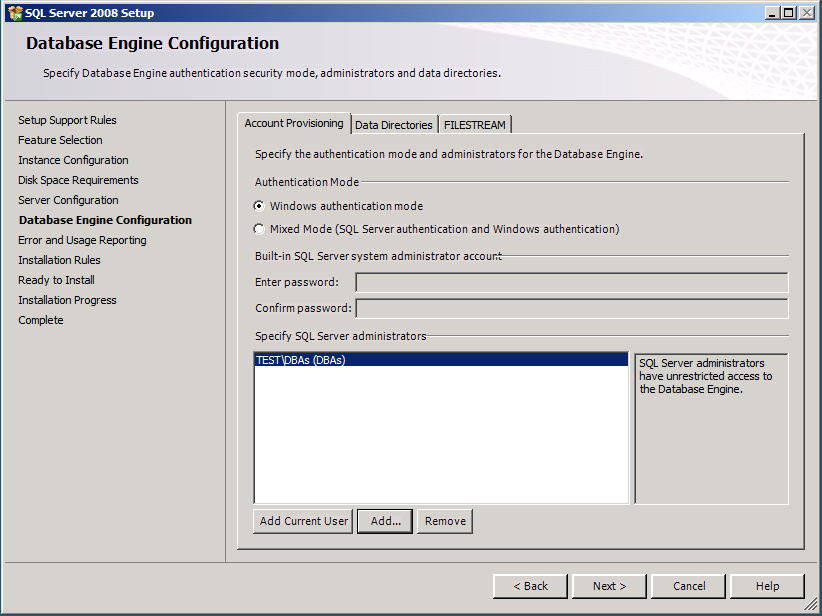 
Suppose you're installing SQL Server 2008 in a domain where no Sr. DBA Windows groups exists. You get to the configuration screen in figure 1 and realize the problem, so you pause your installation and get the Sr. DBA group created. Then you add the new group under 'Specify SQL Server administrators' and finish the installation. Then you open SQL Server Management Studio (SSMS) and try to log in to your new instance using Windows Authentication, as in figure 2, but you get hit with a login failure, as in figure 3. 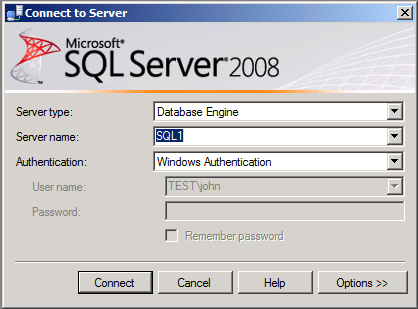 
What went wrong? Not to worry, this is about the easiest problem you'll ever overcome. Just log out and log back in again. Since you were already logged in before the DBA domain group was created, your Windows credentials don't include that domain group membership until after you've logged in again.


If you're logged in to SQL Server Management Studio (SSMS) while your Sr. DBA Windows group is created, don't expect it to provide you with it's privileges until you've logged out and back in, similar to the problem above. You have to log in again for your Window login to pick up the new permissions, which is needed before SSMS can give you the new privileges based on it.