First published on MSDN on Jul 19, 2016
SQL Server has supported parallel data load into a table using BCP, Bulk Insert and SSIS. The picture below shows a typical configuration of a Data Warehouse where data is loaded from external files either using BCP or SSIS. SQL Server supports parallel data load. 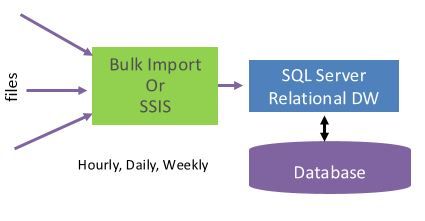 Another common scenario of loading data is via a staging table. Data is first loaded into one or more staging tables where it is cleansed and transformed and then it is moved to the target table as shown below.

Example: This example shows data migration from a staging table into a target table with CCI both with/without parallel insert

-- create a target table with CCI

Here is the query plan. You will note that the 4 million rows are being inserted single threaded into the target table

Now, let us the same data migration but with TABLOCK.

Here is the query plan. You will note that the 4 million rows are being inserted single threaded into the target table

This data movement took 7.9 seconds as compared to 11.7 seconds with single-threaded plan. That is almost 35% reduction in the elapsed time.
SQL Server Execution Times:
CPU time = 21063 ms,  elapsed time = 7940 ms.
Here is how the rowgroups look. Note, there are 4 compressed rowgroups each with 1 million rows and the compression was triggered due to BULKLOAD. It is set to BULKLOAD because each of the 4 threads (the machine I am testing on has 4 cores) ran out of rows after accumulating 1000000 rows and did not reach the magic marker of 1048576.


While these restrictions are enforced in SQL Server 2016 but they represent important scenarios. We are looking into relaxing these in subsequent releases. Another interesting point is that you can also load into 'rowstore HEAP' in parallel as well.