Most of us are familiar with data stored as rows. A row stores all the columns either by value or by reference. One or more rows are packed into pages and stored on the media. When a row needs to be accessed, the page containing the row is brought into memory. Relational database systems have used this model since 1970s very successfully both for transactional and analytics workload. So the question really is what is so different today?

Well, the rowstore model continues to work well for transactional workload where a typical transaction touches only a small set of rows. For example, consider an order management application where each customer places his/her order and checks its status. The traditional rowstore model provides very efficient execution of DML (i.e. Delete, Modify and Insert) operations as well as for fetching a small set of rows. However, rowstore increasingly is falling short in delivering acceptable performance for analytic queries which need to process a large number of rows (think billions) in today’s world where the volume of data to be processed is increasing exponentially. Some examples, data generated by machines in a factory could be used to predict when it needs to be serviced to avoid downtime or credit card transactions that could be used to understand the buying patterns of consumers and could be used to provide targeted promotion. Most IT departments are faced with the challenge of managing such large volume of data and to provide interactive response time (think seconds) for analytics. Columnstore index is one of the key components to help achieve these objectives.

The columnstore represents a new storage format of storing relational data. It stores data as columns instead of rows as shown in the picture below representing a relational table with 5 columns. Note, though the data is stored as columns, you can still query the table to fetch the row with all its columns but it is more expensive to rowstore where all the columns are stored together. 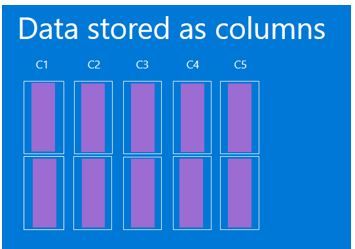 You may be surprised to know that column storage was first introduced in 1969 https://en.wikipedia.org/wiki/Column-oriented_DBMS but  only in the last 10 years, it has been adopted in commercial databases.

In subsequent blogs, I will describe how columnstore technology has been implemented in SQL Server to deliver the industry leading performance for analytics.