First published on MSDN on May 01, 2016
With SQL 2005 end of life, many customers are planning their upgrades to SQL 2014. One of the recommended post upgrade tasks is updating the statistics of all the tables and databases in latest compatibility level. The updated statistics ensures the query optimizer in the latest release has most up to date data to produce the best plans. For VLDB scenarios, running update statistics on the entire database can take considerable time to complete depending on the volume of data. As applications are required to run 24/7 with desired performance, DBAs are increasingly under pressure to keep the maintenance window as low as possible. One such improvement introduced in SQL 2014 SP1 CU6 and SQL 2016 CU1 is targeted towards optimizing and reducing execution times for UPDATE STATISTICS runs is detailed in this blog post.


Let me illustrate this with an example. Consider a hypothetical scenario where a database has 4 tables viz T1, T2, T3 and T4. Table T1 has 8 statistics in total combining the index and column statistics. Table T2 has 4 statistics, table T3 has 2 statistics and table T4 has 2 statistics. Let's say updating each statistics takes 1 sec each.


In this case, if the statistics is updated serially using a single job, the total time taken to update the statistics for all the tables in the database is (8+4+2+2) = 16 seconds as shown in the figure below 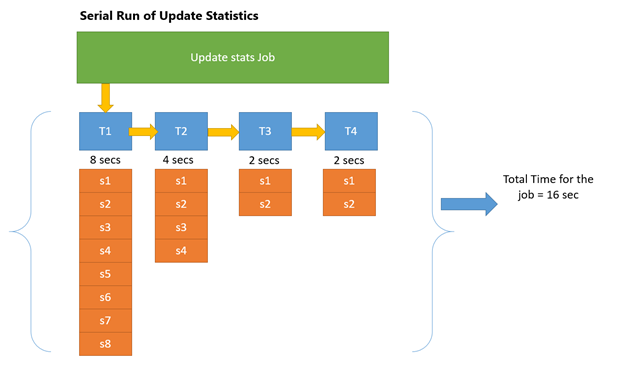 If the statistics is updated in parallel using 4 parallel jobs (One job per table), the overall statistics gets updated for the entire database in 8
seconds as the shown in the figure below 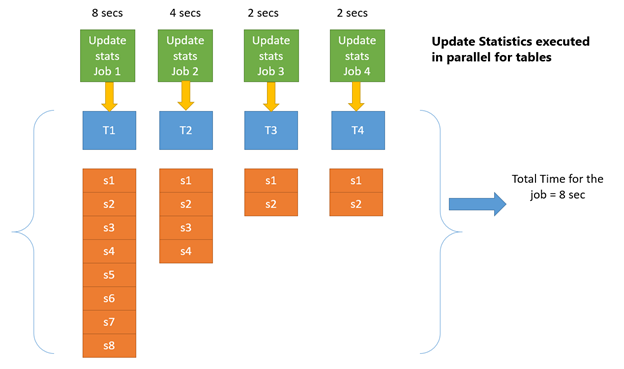 Like any parallel algorithm, you can gain maximum throughput when there is even distribution of workloads across all the execution units. When executing update statistics in parallel like previous example, there is a possibility one table has many statistics and large number of records as table T1 in this case which is refreshed by the same thread or job. The worker thread or job running the update statistics on this table is likely to delay the overall execution while the other threads are idle having completed their workload. This uneven distribution of workload can reduce the overall efficiency and throughput of the UPDATE STATISTICS run. The parallel execution of UPDATE STATISTICS job can be improved by running the update statistics on individual statistics in parallel rather than table to distribute the workload evenly across threads.


In the above scenario, if the update statistics is run in parallel on individual statistics , the statistics can be completed in 4 seconds as shown in the figure below 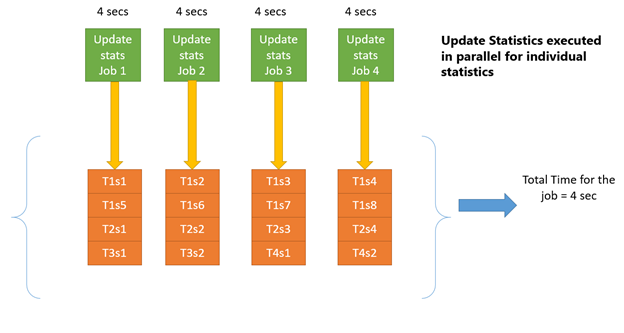 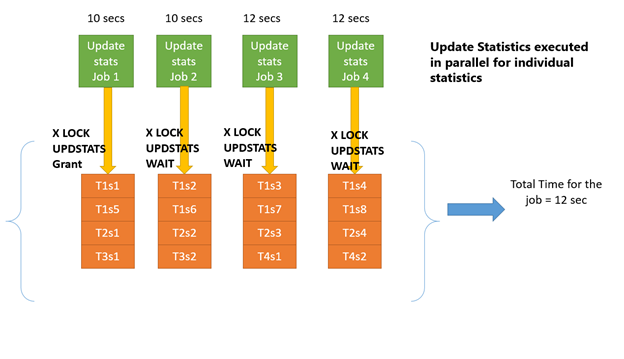 With SQL 2014 SP1 CU6, a new Trace Flag 7471 has been
introduced to address this blocking scenario. Trace Flag 7471 is documented in the KB 3156157 . Trace Flag 7471 changes the locking behavior of update statistics command such that SQL Server engine
no longer acquires X LOCK on UPDSTATS resource on the table. Rather the engine acquires an (update) U LOCK on each individual statistics object being updated which doesn't block other parallel threads on the same table running on different statistics. This behavior improves the overall concurrency of the update statistics job run executing in parallel and improves its performance. 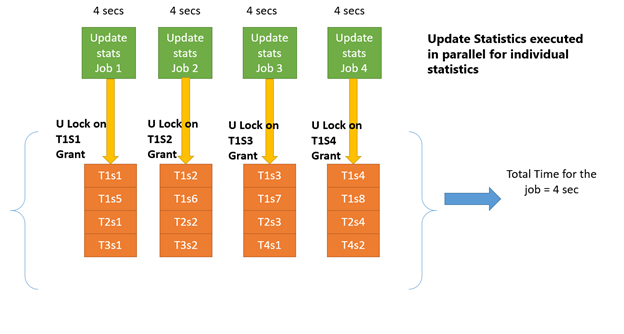 Our empirical testing shows TF 7471 can increase the possibility of deadlock especially when creation of new statistics and updating of existing statistics are executed simultaneously. So the recommended best practice is to use TF 7471 only as a part of maintenance when update statistics jobs are run in parallel and should be turned off otherwise.


To conclude, starting SQL 2014 SP1 CU6 , the performance and execution times of update statistics can be improved by running the job in parallel on individual statistics and enabling Trace flag 7471.