Turn on suggestions
Auto-suggest helps you quickly narrow down your search results by suggesting possible matches as you type.
Showing results for
Show  only  | Search instead for
Did you mean:
Best Practices for Moving Data Encrypted with Always Encrypted
By


With the introduction of Always Encrypted, Microsoft’s SQL platform (SQL Server 2016 and SQL Azure DB) protects sensitive data in use (during transactions and computations) without requiring any significant re-work in your applications. In a typical scenario, a client application is set up with Always Encrypted enabled in the database connection string. This instructs the SQL client driver to transparently decrypt the data retrieved from encrypted columns and to transparently encrypt the data before inserting it into the encrypted columns. However, in addition to this general use case, there are scenarios, in which applications need to copy or move the encrypted data from one table to another table, but there is no business requirement to transform, or even look at the data during the migration. This scenario is quite common in Extract-Transform-Load (ETL) and data archival applications. In this article, we discuss this scenario in depth and provide the associated best practices.


Our customers use the SQL platform to store volumes of high-valued data assets for their organization. With Always Encrypted, we want to deliver additional security while ensuring complete integrity of stored user data. To achieve this, in a regular workflow SQL Server/Azure SQL Database disallows an application to insert data directly into an encrypted column. If the application has not enabled Always Encrypted in the connection string, an insert statement targeting an encrypted column will fail. To insert a value into a column protected with Always Encrypted, the application must connect to the database with Always Encrypted enabled in the connection string and pass a plaintext value of the datatype configured for the target column. Subsequently, the SQL client driver encrypts the value and sends the ciphertext to the database. This ensures plaintext data is encrypted and stored appropriately.


Now, assume that you need to implement an application that copies data, which is already encrypted and stored in one table, to another table. When using the above workflow, the application would first need to retrieve and decrypt the data, and then encrypt and insert into the target table. There are two problems with this approach:
1. The data is unnecessarily exposed, assuming the application does not really need to see the data in plaintext.
2. It adds unnecessary computational overhead with encryption/decryption making data migration more expensive and time consuming.
The desired behavior is for the application to copy the data without ever decrypting it. To enable this scenario, Always Encrypted provides the “Allow Encrypted Value Modifications” switch that can be used to change the default/normal behavior of bulk insert operations targeting encrypted columns. When this switch is turned on (the default being off), the switch suppresses cryptographic metadata checks on the server, allowing an application to bulk insert values that are already encrypted and, in turn, to move encrypted data between databases without extra overhead or security risk.


There are two different implementations of this switch:


Caution: You should be very careful when using these options as improper usage can lead to data corruption. The associated risk is even greater for the user option (for reasons we discuss later in the article).


To try the examples in this article, you need:


- SQL Server 2016 (CTP 3.0 or later) or a subscription in Azure.
- SQL Server Management Studio October 2015 preview – version 13.0.700.242, or later. You can either obtain SSMS as a standalone download as part of SQL Server 2016 Community Technology Preview (CTP) 3.0, or later.
- NET Framework 4.6.1 RC , if you want to try the C# code example using the new SQL Bulk Copy AllowEncryptedValueModifications API option.


We assume that in your SQL Server instance or in Azure SQL Database, you have an existing database, named ClinicEncrypted , that contains the Patients table with two encrypted columns: SSN and BirthDate , protected with a column master key that is a certificate stored in Windows Certificate Store. The Patients table schema is identical to what we used in the previous articles from the Always Encrypted blog series . That table should contain some data. You can create the database and generate the certificate following the instructions from the following article: Getting Started With Always Encrypted .


Before moving any data, you need create the target database ClinicEncryptedCopy and populate it with the necessary metadata for the column master key and the column encryption key (CMK and CEK). Next, you will need to create a Patients table in the database that shares an identical schema with the source. 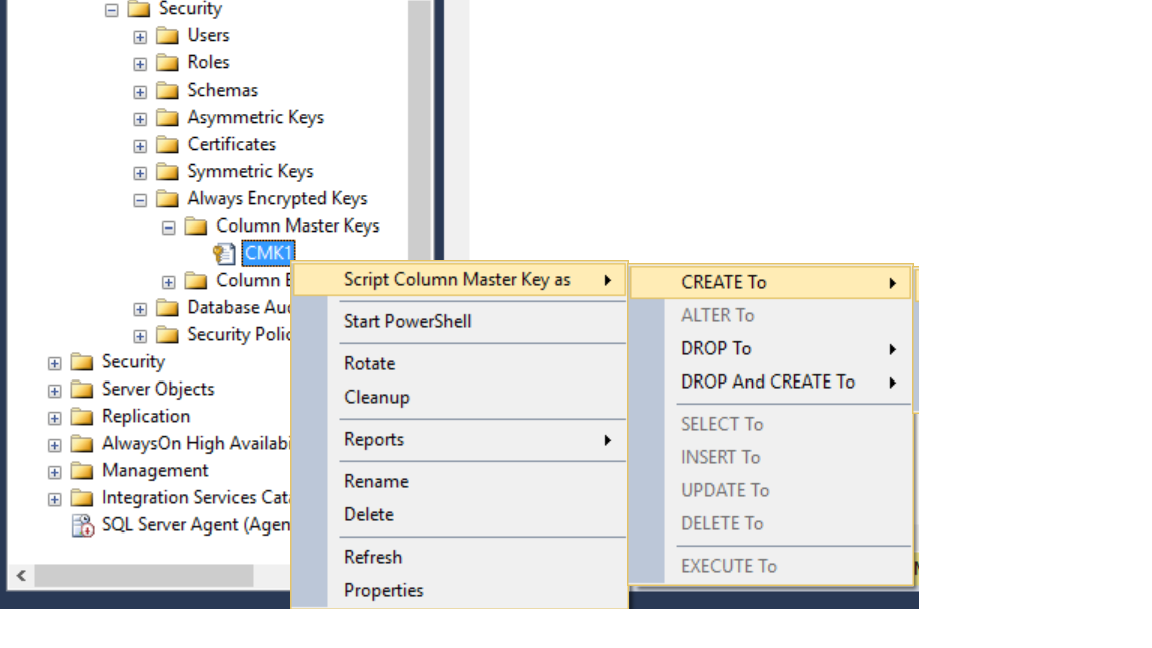 
Similarly, you can set up column encrypted Key metadata in the target server using the “Script as” feature. 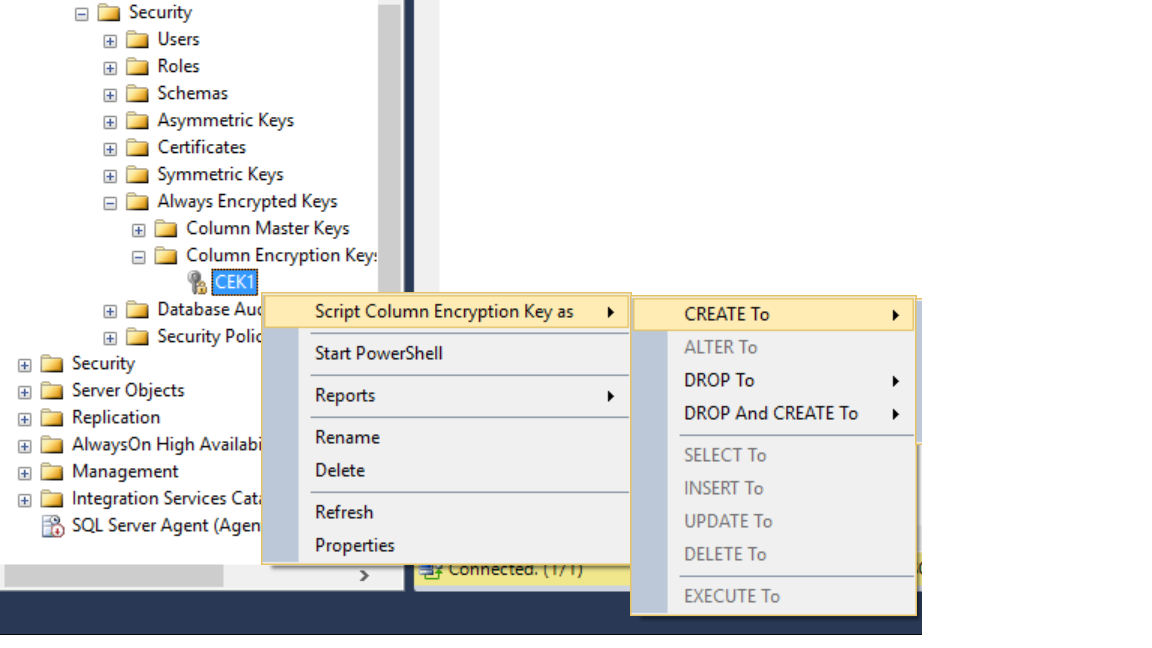 1.4) Setup Target table in the database


You can use the T-SQL script provided below to create the Patients table in the target database.


Note : Due to a known bug, using “Script as” to create a table in target database fails, because the T-SQL is generated with missing collation properties. (You might remember from previous articles, encrypted columns of string types, such as the SSN column, must use a BIN2 collation.) This is a known issue and will be addressed in a future release.


In case you are copying data to a different table in the same database, you can skip all the early steps and jump directly to Step 1.4. A different target table name (instead of Patients ) would be used in this case as it shares the same user database.


We will demonstrate two alternative ways of copying data from the source to the target table:


The below code demonstrates the use of the AllowEncryptedValueModifications option in the ADO.NET Bulk Copy API. Please, see SqlBulkCopyOptions for details.

A couple of things to note about the above program:


Very often, legacy tools or third-party applications (e.g. tools performing ETL workflows) are used to bulk-copy data. For all these applications, where a change to application code is not feasible, you can use the ALLOW_ENCRYPTED_VALUE_MODIFICATIONS user option. In the below example, we will demonstrate this scenario using bcp.exe.


2.2.1) In the target database, create a new database user for data copy operations and set the ALLOW_ENCRYPTED_VALUE_MODIFICATIONS option for the user.


CREATE USER BulkCopy FOR LOGIN BulkCopy WITH ALLOW_ENCRYPTED_VALUE_MODIFICATIONS = ON


Alternatively, you can use ALTER USER instead of CREATE USER to apply the switch to an existing user.


ALTER USER BulkCopy WITH ALLOW_ENCRYPTED_VALUE_MODIFICATIONS = ON


Next, you will also need to ensure that all the appropriate permissions are granted to the user for performing the bulk copy operations.


The following minimum permissions are required to be granted to the created user:


bcp will be prompt you to enter the file storage type, prefix length and filed terminators for every column.  You can stick to the defaults or choose appropriate values for the fields.


Note: the resulting file will contain encrypted values from SSN and BirthDate columns.


Alternatively, set the option to OFF


ALTER USER BulkCopy WITH ALLOW_ENCRYPTED_VALUE_MODIFICATIONS = OFF


You can now verify the result of bulk copy operation by attempting to decrypt the copied values in the SSN and BirthDate columns.


3.1) Using SSMS, connect to the target database with Column Encryption Setting = Enabled specified in the Additional Connection Parameters tab in the Connect to Server dialog. 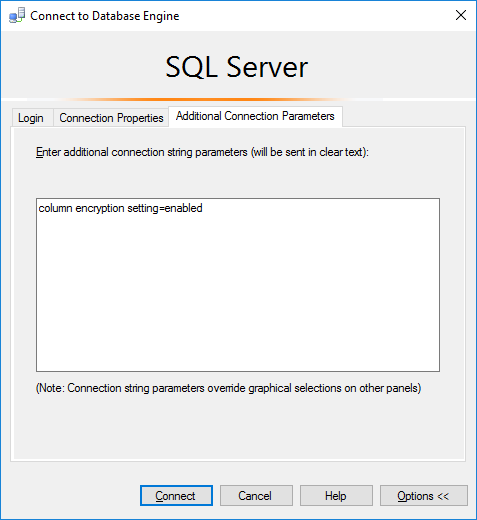 3.2) Run a query to retrieve all data in the Patients table. Assuming, the certificate used as the column master key in the database is deployed on the machine, on which SSMS is running, the query should succeed and you should see plaintext values in the SSN and BirthDate columns, and the values should be identical to what is stored in the source database. 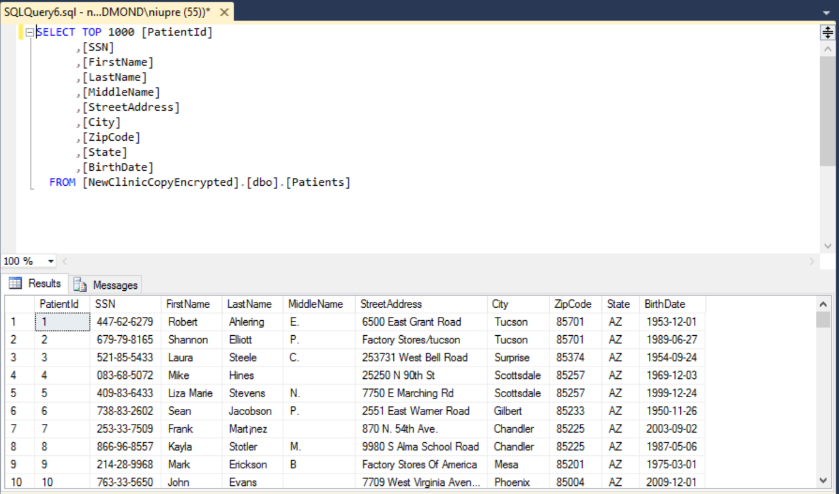 What Can Go Wrong


You need to be extremely careful when using the AllowEncryptedValueModifications Bulk Copy API flag or the ALLOW_ENCRYPTED_VALUE_MODIFICATIONS user option. Suppressing cryptographic metadata checks means SQL Server/Azure SQL Database will allow your application to insert an arbitrary varbinary value into an encrypted column. You are responsible for making sure, the values your applications inserts to the target encrypted column are valid ciphertext values, generated using the algorithm, the encryption type and the column encryption key, specified in the schema for the target column.


Here are two examples of scenarios that illustrate how catastrophic the improper use of the switch suppressing cryptographic metadata checks can be.


Consider an application that performs the following steps:


Note: the application may receive one of many ciphertext parsing errors, such as the below error.


Here are a few guidelines you can follow to minimize or mitigate the risks, we described above.


This concludes our deep dive into bulk-copying data protected with Always Encrypted. Please be extremely careful when using either method described in this article to ensure data integrity and avoid any data corruption mishaps. If you have any further questions or feedback about Always Encrypted, please let us know in the comments below.