Based on customer feedback over the course of the last 12 months we implemented several improvements in SAP BW. The code changes improve SAP platform migrations of very large SAP BW instances from other DBMS to SQL Server significantly. Furthermore, they simplify and accelerate SAP BW process chains for very large BW systems. The most important improvements are related to columnstore rowgroup compression, which is described below. Other recent improvements will be discussed in a separate BLOG.

A SQL Server columnstore is organized in rowgroups, having up-to one million rows per rowgroup (see https://techcommunity.microsoft.com/t5/Running-SAP-Applications-on-the/Concepts-of-SQL-Server-2014-C... for details). For best query performance, you should trigger a columnstore rowgroup compression at the end of all BW Process Chains, which load data into a cube. You can either use a BW Cube Compression or the BW Process Chain type "Index Repair" for this purpose. However, some customers had an issue with this.

With the new Rowgroup Compression Framework of SAP Note 2329540 , you can trigger a rowgroup compression also with the BW Process Chain type "Update Statistics". Update Statistics is typically already included in a Process Chain, even when the Process Chain was originally created for a different database platform. A typical process chain for loading data into a cube looks then like this: 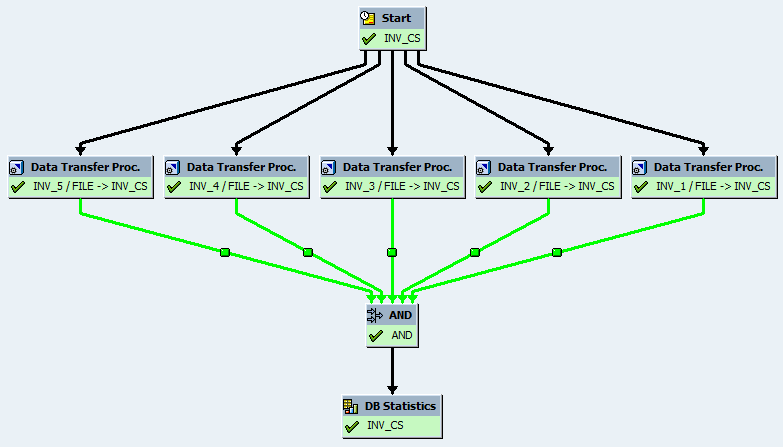 It was not possible to change the SQL Server system table sys.column_store_row_groups (in SQL Server 2014 and 2016). However, we achieve now very good query performance on columnstore metadata by using a different SQL Server system table (sys.system_internals_partitions) instead. For implementing this we had to change huge parts of the BW code in several areas (BW index repair, BW index check, BW update statistics, BW cube compression...)

Reading the metadata using the new method is several thousand times faster on very large BW systems. This results in much faster process chains, which contain the process chain types "Index Repair" or "Cube Compression". The only thing you have to do, is applying SAP Note 2329540 . There is no need for configuring anything or for setting any RSADMIN parameter.

However, once SAP Note 2329540 is applied, you have various configuration options regarding columnstore rowgroup compression in SAP BW. The options are described in detail in the SAP Note. The major reason, why we implemented these options, was to be prepared for future changes in SAP BW and SQL Server. Furthermore, the new RSADMIN parameter standardizes already existing (undocumented) parameters. Without setting any RSADMIN parameter, you automatically get the preferred default behavior (which also depends on the SQL Server version).