Turn on suggestions
Auto-suggest helps you quickly narrow down your search results by suggesting possible matches as you type.
Showing results for
Show  only  | Search instead for
Did you mean:
SAP on SQL General Update for Customers & Partners April 2015
By

SAP and Microsoft are continuously adding new features and functionalities to the SAP on SQL Server platform. The key objective of the SAP on Windows SQL port is to deliver the best performance and availability at the lowest TCO. This blog includes updates, fixes, enhancements and best practice recommendations collated over recent months.


SQL Server 2014 is now Generally Available to customers and almost all NetWeaver 7.0 and higher systems are supported.


The latest SWPM can be found here: Software Logistics on SQL Server 2014

It is strongly recommended to download and read the implementation documentation as this contains important concepts and prerequisites for running SAP on Azure.

Azure has proved to be a very popular platform for Development and Test systems as it is very quick to provision and de-provision systems.


Customer Case Studies for Zespri , SCT and Softtek are available


SQL Server 2014 includes new column store functionality that is fully integrated to BW.  BW customers are strongly recommended to implement this technology.  More information can be found in these blogs

Notes: SQL Server Column Store does not work with Realtime cubes.  Customers migrating to SQL Server should implement all the notes listed in the SQL Server specific section of 888210 - NW 7.**: System copy (supplementary note) in the source system prior to export


We have previously blogged about this topic however some customers continue to be impacted by this issue.  Customers running SQL Server 2012 please read this!


It is strongly recommended to update to SQL Server 2012 Service Pack 2 and the latest CU (the bug is fixed in CU7 & CU8 as well).


In this blogpost we discuss the official End of Life of Windows 2003 more than 12 years after this operating system was released.  The vast majority of SAP on Windows customers have already upgraded to modern Windows releases and only a small minority of SAP customers are running on Windows Server 2003.


Extended Support for Windows Server 2003 ends in July 2015 and this will materially impact the supportability of SAP software on this platform.


Intel and AMD continue to increase the performance and improve the price/performance of Intel x86 commodity based systems.

Recommended configuration for 2 socket systems are:

*It is strongly recommended to follow the minimum RAM guidance above

7.        How to pinpoint which number range is causing block on NRIV


Some customers that have deployed very powerful servers with large amounts of RAM and ultra-fast disk storage like FusionIO have reported that their systems speed up dramatically.  However these same customers also report that they observe the most expensive query in their system is now a SELECT on NRIV.

Some background is required to understand why this is happening.


NRIV is a table that holds number ranges.  A number range is required for many objects in SAP applications.  Some examples include “Invoice Number” or “Sales Order Number”.  Sometimes these number ranges are required by law to be contiguous (meaning the numbers must follow in sequence with no gaps).  This is usually required for tax and audit reasons.


After upgrading to powerful new Intel servers with large amounts of RAM the vast majority of the database can be stored in memory, meaning access is extremely fast.  Write operation to the transaction log are extremely fast because they are now onto FusionIO cards.


The “problem” is that the SAP application is now hitting an internal application bottleneck because all the infrastructure bottlenecks have been removed.

Detecting and optimizing this is possible, but requires some care, detective work and involvement from the SAP functional team.


The steps are as follows:

1. Run ST04 -> Performance -> SQL Statements and observe the consumption by % Time of statements on the Number Range Table NRIV (see Figure 1 below)


2. Run ST04 -> Performance -> History -> Blocking Lock Monitor (see Figure 2 below).  If this feature is not switched on switch this feature on with the button on the menu bar (it is switched off by default) and wait about 1 day.


5. Copy the SQL text from this blog below and paste into SQL Server Management Studio and run.  Be careful to ensure the tracefile path exists and can be written to


6. Open the trace XEL file in SQL Management Studio and step through.  Carefully note down the number range value(s) that are causing waits.  Typically one or two can be seen.  (see Figure 4)


7. Compile the information and pass to the SAP application team.  Typically the configuration and buffering settings can be changed to allow buffering of some number ranges. 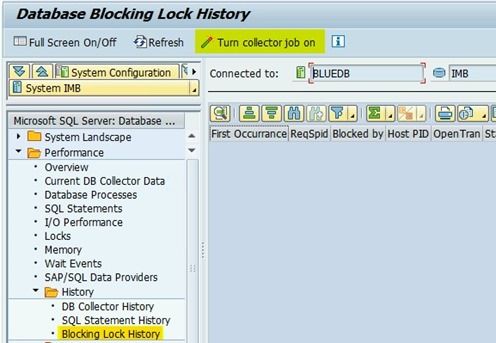 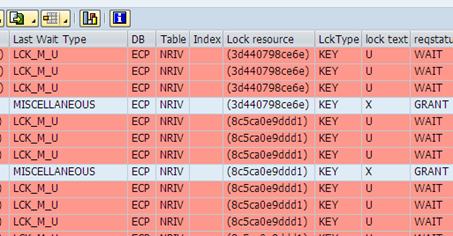 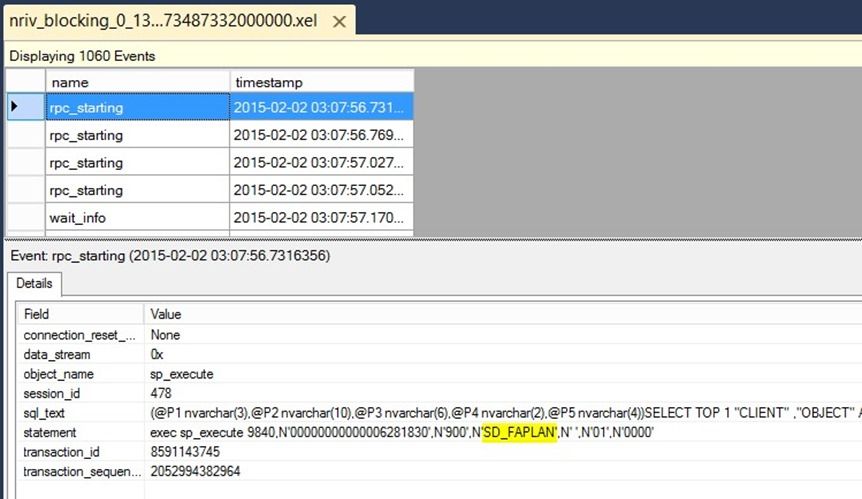 There are several different ways to construct the SQL statements that are passed down to the DBMS.  SAP has recently improved the performance of FAE statement.

2144575 - An improved prefer_join method for FOR ALL ENTRIES


Many customers have reported problems with VMWare support of the SAP ASCS because VMWare does not fully support SCSI Shared Disks in a cluster.


VMWare publish an article where they detail which versions and patches of VMWare support different Windows Server... .


This article has proved exceedingly difficult for most customers to interpret.


a.  Windows is the only Operating System where SAP directly document and support a High Availability solution for the SAP ASCS.  The solution SAP implemented uses a shared disk


b.  The SAP ASCS can leverage a SCSI shared disk or iSCSI


c.  There are many restrictions on VMWare releases earlier than vSphere 5.5 update 1


d.  If the VMWare release is too old to support Windows Server 2012 R2 with SCSI shared disks then there are 3 options:  (a) use iSCSI (b) use Windows 2008 R2 [not recommended] (c) Run the SAP ASCS on physical or Hyper-V

Windows 2012 R2 Hyper-V supports vHBA and Shared VHDX to provide shared disks between guest cluster nodes.  This is simple and easy to configure and is always supported across different Windows Server releases.


1. This table lists the support status by VMware on vSphere. Check with your vendor as the status of third-party software vendor support may differ. For example, while VMware supports configurations using MSCS on clustered Windows Server 2003 virtual machines, Microsoft does not support it. The same applies for the support status of the operating system version. Support for software that has reached end-of-life may be limited or non-existent depending on the life cycle policies of the respective software vendor. VMware advises against using end-of-life products in production environments.

2. Supported only with in-guest SMB and in-guest iSCSI for vSphere 5.1 and earlier. This restriction does not apply to vSphere 5.1 Update 2 and 5.0 Update 3. (See relevant footnotes under preceding table 1)

3. In-guest clustering solutions that do not use a shared-disk configuration, such as SQL Mirroring, SQL Server AlwaysOn Availability Group (Non-shared Disk), and Exchange Database Availability Group (DAG), except when the system disk's VMDK is located on NFS datastore, do not require explicit support statements from VMware.

The table below shows the support matrix for SAP ABAP and Java applications.


This is due to the fact that the JVM 4.0 specification used by SAP for 7.0x is very old.  Support for the JDBC drivers for this old VM has been terminated many years ago.  Only SAP customers may continue to use these drivers in productive systems.


SAP Systems based on 7.30 or higher are using modern JVM with modern JDBC drivers that fully support AlwaysOn and Mirroring.

The DB reconnect parameter is below


Windows 2012 R2 servers running Services that have Domain logon credentials can in rare circumstances create a deadlock in the Windows Service Control Manager and hang with a message on screen "Please wait for the User Profile Service".

It is recommended to manually change the Service startup type for non-SAP Services that use Domain logon credentials such as Backup Software.

Content from VMWare, SAP and other sources reproduced in accordance with Fair Use criticism, comment, news reporting, teaching, scholarship, and research

SAP Benchmarks discussed in this blog are fully disclosed below


behalf of the SAP Benchmark Council on March 4, 2015, with the following data: