First published on MSDN on Mar 27, 2017
This blog is a technical overview of a project recently completed by a large Australian Energy Company (the Company) over the past 12 months to transform the Company's SAP Solution from an End of Life HPUX/Oracle platform to a modern SQL Server 2016 solution running on the Azure Public Cloud. This blog focuses on the technical aspects of the project that involved multiple OS/DB Migrations, Unicode Conversions and SAP Upgrades in addition to a move to Azure public cloud.

The project has now been successfully completed by the Company and BNW Consulting, a SAP consulting company specializing in SAP on Microsoft platforms.

The Company implemented SAP R/3 in 1996 and deployed on HPUX and Oracle, a popular platform for running SAP applications at the time. Over time additional applications such as SAP Business Warehouse, Supply Chain Management, Enterprise Portal, GRC, PI, MDM and SRM were deployed. The UNIX based platform had reached end of life and the Company conducted a due diligence assessment of the available operating systems, databases and hardware platforms for running SAP and selected Azure, Windows 2012 R2 and SQL Server 2016.

Factors that were taken into consideration included:

2. No new investment by UNIX vendors into this technology and near universal move away from UNIX for standard package type applications like SAP.

3. SQL Server 2016 includes a Column Store capability that is integrated into SAP BW and delivers performance sufficient to allow removal of expensive Business Warehouse Accelerator (BWA) from the solution.

4. Azure Public Cloud platform has matured and is fully certified and supported by SAP.

5. Improvements in High Availability and Disaster Recovery technologies for Windows and SQL Server 2016 which allow for improved SLA.

6. Azure cloud has an integrated Disaster Recovery tool called Azure Site Recovery (ASR). This tool allows for DR testing at any time without impacting the DR SLA or production system.

7. Azure platform has a strong partner roadmap with SAP including the provision of 4TB Hana appliances and certifications of Azure VMs for Hana.

In addition the current platform was running on Oracle 11g which was also at end of life, there are restrictions on database compression with Oracle, no roadmap for FEMS Push Down for BW on Oracle and the SAN storage was out of space and needed renewing.

Before the migration to Windows, SQL Server and Azure the SAP application landscape consisted of these SAP components:

The target landscape on Azure (Australia Region), Windows 2012 R2 and SQL Server 2016 Service Pack 1 required some components to be simultaneously OS/DB migrated, transferred to Azure and converted to Unicode. The target landscape releases are listed below:

Storage: Azure Premium Storage used for all DBMS servers (SQL Server, MaxDB and TREX). Standard used for all other workloads

To achieve the best outcome for the Company the SAP OS/DB migration partner BNW Consulting recommended against a "Big Bang" go live. Such a go live would involve moving the entire production environment to Azure in an entire weekend. While this is certainly technically possible to do, the advantages of this approach are only small and the resources required to do this are considerable.

An incremental go live approach was successfully used. Smaller NetWeaver systems were migrated, upgraded or reinstalled on Azure. Then the BW system was exported in the existing datacenter using fast Intel based Windows servers to run R3load. The performance of R3load on HPUX and UNIX platforms in general far slower than Intel based platforms. The dumpfiles were transferred using ftp and SAP migmon, imported in parallel and then BW was upgraded to BW 7.40 with the latest Support Pack Stack. The database was converted to Unicode during the migration.

In the final phase the SAP ECC 6.0 system was moved to Azure, upgraded from EHP5 to EHP7 and converted to Unicode.

To speed up the import the SQL Server transaction log file was temporarily placed on the D: drive (non-persistent disk) on the GS5 DB server. Additional log capacity was allocated on a Windows Storage Space created from 6 x P30 Premium disks.

The implementation partner also tested and remediated where necessary more than 200 interfaces to more than 40 non-SAP applications.

SQL Server 2016 has many features of great benefit to SAP Customers:

1. Integrated Column Store: Drastic reduction in storage and vastly increased performance. This technology can be automatically deployed during a migration during the RS_BW_POSTMIGRATION phase or using report MSSCSTORE. Many customers have terminated SAP Business Warehouse Accelerator and achieved the same or better performance after implementing SQL Server Column Store.

2. SQL Server AlwaysOn is a built in integrated HA/DR solution that is simple to setup.

4. SQL Server Backup to Blob Storage allows a backup to write directly to multiple files directly on a URL path on Azure storage. Full and Transaction Log backups are taken off SQL Server AlwaysOn secondary databases. This reduces the load on the primary database and also allows for easy creation of offsite backups in the DR datacentre

5. SQL Server 2016 supports Azure Storage level "snapshots" similar to Enterprise SAN level snapshots - currently 4 hourly and retained for 48 hours. SQL 2016 has the ability to do larger backups > 1TB which unified and simplified the Company's backup processes across all SAP applications 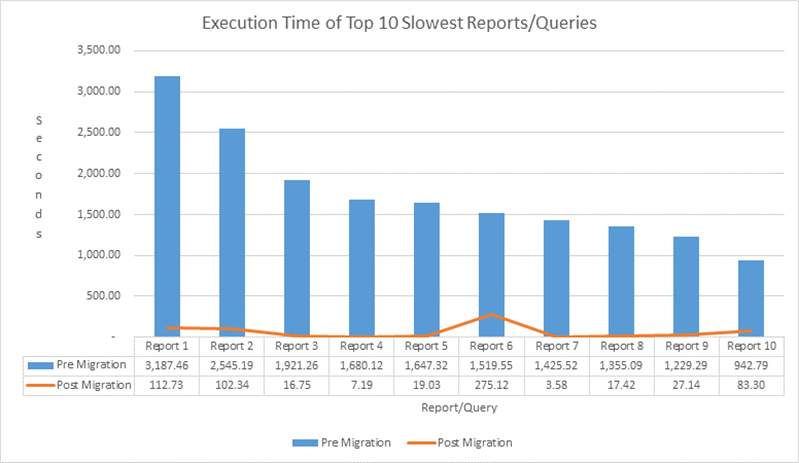 In addition the BW Process Chain times have reduced by 50%. This has allowed users to report on more up to date data.

4. Storage Pinning – Separate storage accounts were used for SQL Server AlwaysOn nodes. This ensures that the failure of an individual storage account does not result in the storage being unavailable for both nodes. This capability is now built into a new Azure feature called "Managed Disks".

6. Network Security Groups – Network ACLs were can be created per vNet, subnet and per individual VMs.

7. Azure ExpressRoute – High speed connectivity via a dedicated encrypted WAN link between a customer site and the Azure datacenter.

8. Active Directory Group Policy – SAP Servers and Service Accounts are placed into a container in Active Directory and a Group Policy is enforced to harden the Windows operating system thereby reducing the servicing and patching requirements. The Service Accounts for SQL Server were configured to Lock Pages in Memory and Perform Volume Maintenance Tasks. Internet Explorer was removed from Windows Server 2012 R2 further reducing the need for servicing and patching. Most customers adopting this deployment configuration are able to eliminate regular patching and move to a yearly update and patching cadence.

All SAP application components within the Primary Datacenter have High Availability. This means the failure of an individual server or service will not result in an outage. SQL Server is protected via synchronous AlwaysOn with a 0 second RPO, 10-45 sec RTO. The SAP ASCS service is protected using Windows Clustering.

Because Azure does not natively support shared disks a disk replication tool called BNW AFSDrive is used to present a shared disk to the cluster.

The Disaster Recovery site must be in a totally separate geolocation in order to provide true resilient DR capabilities. Completely independent electricity, WAN links and governmental services and security are required to reach the required SLA.

The Disaster Recovery solution incorporates one SQL Server and ASCS node in the DR site. If a DR event forced the Company to run for more than a few days at the DR site High Availability would be added to the DR solution. 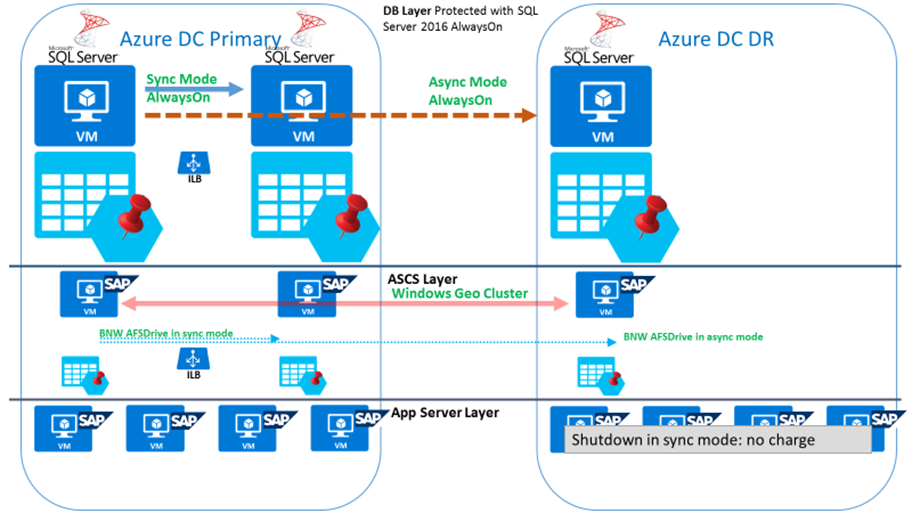 BNW StopLoss – Large Enterprise customers require absolute certainty that every single row in the source database has been correctly migrated to SQL Server. The SAP Migration tools do keep track of export and import row counts at a basic level, but when these tools have been used by uncertified consultants cases of inconsistencies have occurred.  BNW StopLoss eliminates this possibility. BNW StopLoss is a tool that scans export row counts and is asynchronously counts the rows in the target SQL Server database. If any differences are detected an alert is generated.

BNW CloudSnap – SQL Server, Oracle and Sybase databases can be copied using the Azure disk/storage cloning technologies. The CloudSnap utility will briefly quiesce the disks and command the database to checkpoint. This technology allows for backups and system copies to be done effortlessly.

The Company was able to move off an end of life HPUX platform, leverage the many performance and space savings features in SQL Server 2016 SP1 and eliminate the expensive proprietary BWA appliance. In parallel all applications were upgraded to the latest versions, patches and converted to Unicode. The solution delivered allows the Company to stabilize their SAP applications on a modern platform that will stay in support and maintenance until 31 December 2025.

Test environments can be created and refreshed much more rapidly than before and performance of BW and ECC was greatly improved.

The runtimes of DBA tasks such as backups, database integrity checks and restores are drastically faster than on HPUX/Oracle.

Overall system performance and response times have improved dramatically. In addition the HA/DR solution has improved and the DR solution is now easily testable.