With the general availability of SQL Server 2014, a new feature was released in SAP BW: The Columnstore Optimized Flat Cube. The prerequisites for the Flat Cube are described in in SAP Note 2114876 and in the following blog: https://techcommunity.microsoft.com/t5/Running-SAP-Applications-on-the/SQL-Server-Column-Store-for-S.... The Columnstore Optimized Flat Cube is an alternative cube design, which is available as of SAP BW 7.4 SP 8 on Microsoft SQL Server. It uses the same simplified database structures as the HANA Optimized Cube.

The optimizations of the SAP BW Extended Star Schema were introduced for optimizing the rowstore. When using the columnstore they are no longer necessary. There is no limitation on the number of index columns for a columnstore index. The clustered columnstore index contains all columns of the fact table. Therefore, SAP retired the Extended Star Schema starting with HANA. The resulting schema looks like a typical Star Schema, but SAP found a better name for it: HANA Optimized Flat Cube. For other database platforms the new schema is simply called a Flat Cube. Actually, the Flat Cube still contains a single dimension: the packet dimension. It is used for fast (logical) request deletion. However, all other dimensions are gone with the Flat Cube.

Unfortunately there is no consistent naming convention in the SAP community for cube schemas:

Once you have created a Flat Cube, you can use it just as a Non-Flat Cube. There is no need to change existing BW queries or BW process chains. However, there are a few restrictions:

The absence of the dimension tables in a Flat Cube has many advantages: 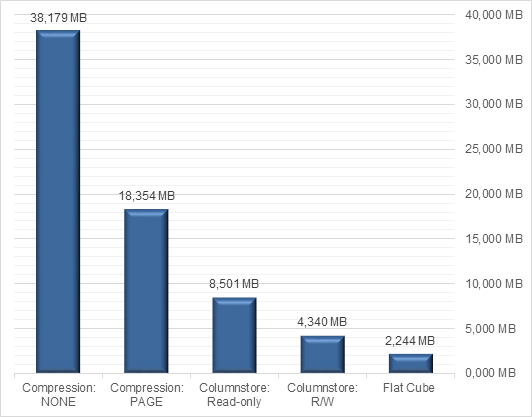 The intention of this blog was to briefly introduce the concept of the Flat Cube. A detailed documentation will be published as an attachment of SAP Note 2116639 and in the SAP Community Network soon.