*** Update 1/26/2015 - After continued testing I have seen the same read-only situation even with my domain credentials, both on opening using Edit, and also after opening read-write then trying to save some time later.  I overcame the initila read-only condition by closing and re-opening the browser - I only share here as it may help unblock someone, but shouldn't be necessary.  More information when I have it...***


*** Update 1/13/2015 - I don't often go back to my blogs and do much editing - but this one got particularly rambly - even for me, so following feedback (thanks Greg!) I am adding some structure and captions - nothing else changes ***


It turns out that those 4 words – saving projects to SharePoint - have so many meanings that before I go too far I guess I’d better explain where this blog series is heading.  Hopefully I will try and cover most of the variations on this theme, but with so many variables (browsers, clients, versions, document libraries, SharePoint task lists, on premises servers or in the cloud, Project Server, Project Online…) I am sure I will miss some out – so I quite expect the comments thread on this post may get quite active and animated.  I’ll cover common issues we see people having, and some potential workarounds or best practices to keep you on the happy path.  Some of the behaviors I describe could be considered bugs – or certainly different behaviors than you might expect to see from other Office applications such as Word or Excel – others may just be tagged with the dreaded ‘by design’ description.  If you haven’t come across this term it is often used to describe behavior where the way we deliver a feature in the product doesn’t match what a customer expects.  It sometimes means we may have been lacking in imagination with our design – more often it is one of the more mundane constraints such as time and money that left a feature short of what we might have hoped to deliver.  And there are times when we just think wow – we never expected anyone would want to do that!  A couple of examples of differences from Word, Excel and PowerPoint would be the Properties Panel – that allows additional columns in SharePoint document libraries to be surfaced in the application – neither Project nor Visio have this capability – and that would not be considered a bug.  Just like Word would consider it a bug that they don’t have the kind of Custom Fields that Project has.  Another difference – Word, Excel, PowerPoint and Visio will open a browser editing experience just from their native document formats – whereas for Project this only comes with Project Server/Project Online and not with mpp files (unless you think of the Sync to Task List as delivering this capability).  Anyway – on with the main topic – save to SharePoint.

Lets start with a list of the ways our mpp file can get to SharePoint – and I’ll come back to Project Online/Server later, but for now I will concentrate on the mpp file format.  I’ll also limit the blog to Project 2013 and SharePoint 2010 and 2013.


I’ll start with a new mpp, created from the Marketing Campaign Plan template – then hit save-as. 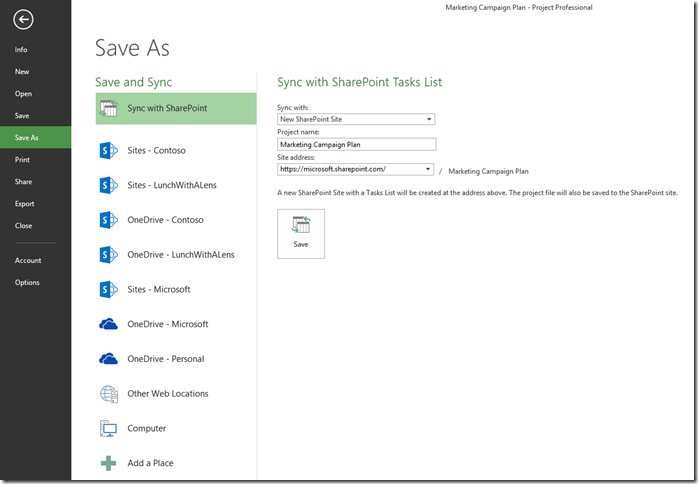 Chances are that your save-as doesn’t look quite as crowded as this, but it might do.  The top option is Sync with SharePoint, and I will come back to that (Part 2), then the next 5 “Sites” options are all different SharePoint locations – and then the OneDrive – Microsoft is also a SharePoint location – my work OneDrive for Business account.  The other OneDrives for Contoso and LunchWithaLens are also SharePoint OneDrive for Business connections – each covered by a different Office 365 login account.  OneDrive – Personal is not SharePoint, but my Microsoft account cloud storage.  Other Web Locations can be SharePoint too and in my case includes some SharePoint 2010 sites.

For this first example I will save into my OneDrive – Microsoft location and choose a recent folder called ____SyncTests. 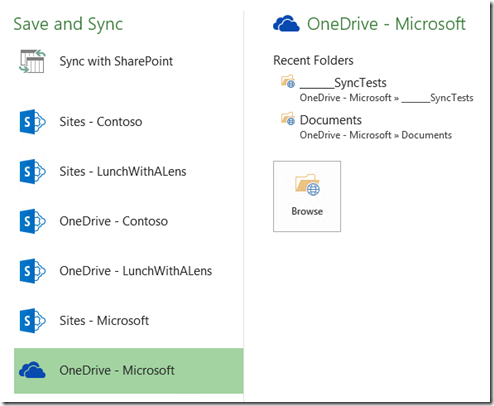 This will bring up a Save As dialog and the path will look like a local directory – but clicking on the down arrow will show the full path to your “My Site” where the SharePoint end of your OneDrive for Business stores files. 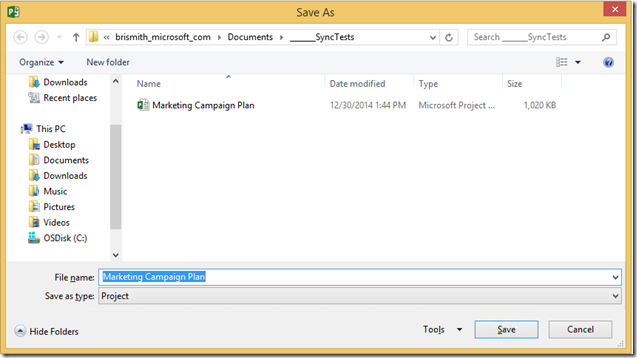 Clicking Save will then show a dialog like the following as the plan gets saved:

The above steps rely on a few different things being in place – such as getting authenticated correctly, having the webclient service running (or if you have a server operating system adding the Desktop Experience feature – which gets you the WebDAV client) but generally this part is the easy one – and can be the more reliable way to get mpp files into SharePoint.  Another way would drag and drop…

2. Copying to a SharePoint document library using drag and drop


And here I dragged another mpp from my desktop into my OneDrive site. 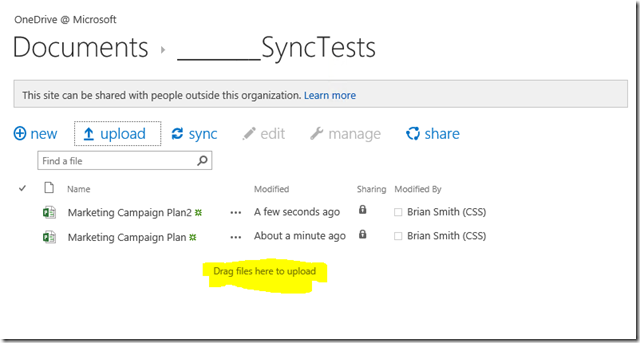 3. Copying the file to a local drive mapped to the document library


Next option is to copy an mpp file into the local mapped folder for your OneDrive for Business service – in my case my D:\Users\BriSmith\OneDrive – Microsoft folder….

4. Options for opening the file - click on the filename in the web view


Now we will look at opening the mpp files again.  If I just click on the plan name in my OneDrive browser window: 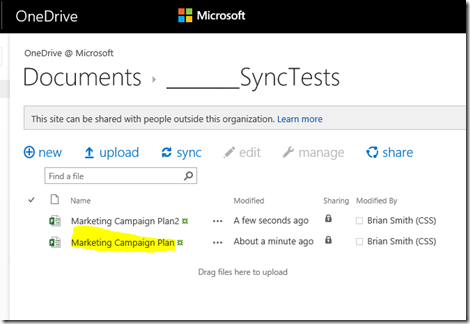 Figure 4.1: The view view of the document library - highlighting the file name

Then it will open read only – as noted in the heading and on the Info tab.  It also tells you how to overcome this – This project has been opened in Read-Only mode.  To edit, either re-open the project in edit mode or select an alternate project location by choosing save-as.  Also notice the %20 characters – this is perfectly normal as the web generally does not like spaces you will see any spaces substituted with %20 in the names (which may not display as such everywhere…)

5. Options for opening the file - using the Edit option 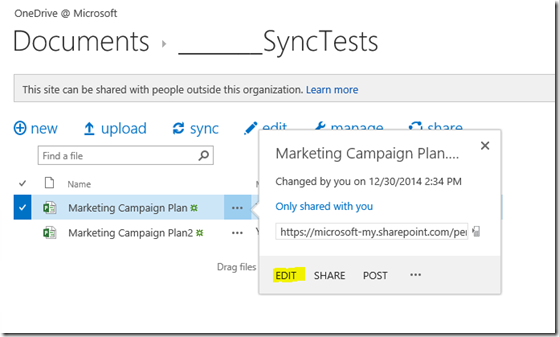 Figure 5.1: The Edit option - in the ellipses fly-out

And for me this opens the plan in read/write mode.  I say ‘for me’ as I know many reading this may well have experienced this still showing read only.  We do have an open bug on this one and investigations are ongoing, but it looks likely that any correction to this behavior would be quite a complex change and out of scope for our normal cumulative update releases.  The behavior is also different to how, for example, Word and Excel handle read-only – and we do have a work item to make the experience the same, but as the file handling and file format for these applications is quite different this may be a complex task, and again out of scope for a cumulative update..  I understand that many customers would appreciate the same behavior though.

6. Options for opening the file - open from the local mapped drive


Another workaround that will work for most people is to open from the local copy of the file in the OneDrive for Business folder, where clicking on the mpp opens it read-write.  Likewise, copying (downloading) the file from the SharePoint OneDrive folder is another workaround – but that always feels very lame even to suggest it.  Some feedback I’ve had on using the local OneDrive folder is around the reliability of the sync.  As I needed to repair my OneDrive sync to get my screenshots and scenarios working I can’t deny that it can be frustrating. 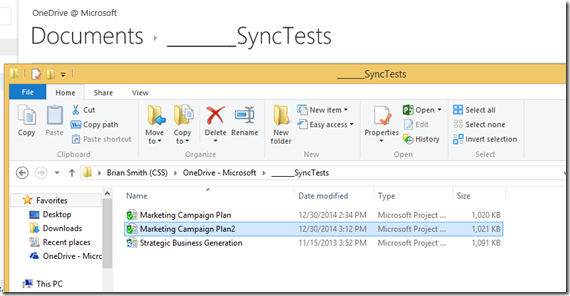 Figure 6.1: The local mapped drive view of my document library

To get even more complex, we are aware of customers running into issues where they want to work with Master and Sub Projects in a document library.  In this case as long as all the projects that you wish to work with are opened read-write then things should be good.  This is really no different than when working against Project Server – if you don’t have the plans open for edit, then they can still be changed in the ‘open’ in-memory copy (maybe just because a calculated field gets updated) and then it will prompt to save – but if it is read-only it will suggest saving as a new project.  This I would certainly describe as ‘by design’.

7. Options for opening a file - from another document library that expects a different account than the logged on user


My next test jumped over to a different document library, on an Office 365 site that uses a different account to connect and a new document library that I had dragged a few documents into.  I was also using Chrome for these tests – not that the browser makes any difference – but different browsers make it easier to have different sites open with different authentication.  I used the ellipses and Edit option: 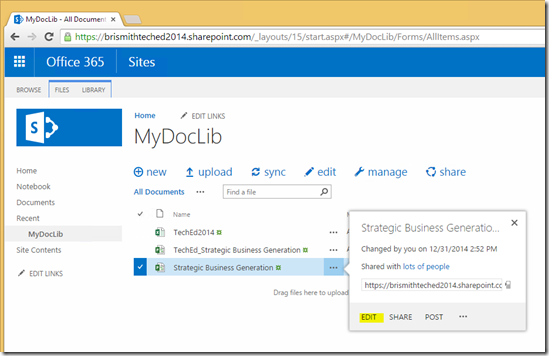 Figure 7.1: The Edit option in my other document library

In this example I saw a few different dialogs coming up, saw my file being downloaded, and also saw a ‘Switch Accounts’ dialog that was looking for my login for this Office 365 site.  I assume it found it cached as I wasn’t presented with a login (and had the browser opened and signed in obviously…)  But it opened read-only.

Figure 7.2: The File, Info page - showing this has opened in read-only even after selecting to Edit

This does appear to highlight the main issue with opening read-only – it works fine if you are logged in to your PC with the same credentials used for your document library – but struggles if you are using different sign-ins – even if those credentials are cached and obviously working (it lets you get to the document after all).  For on-premises installations this generally isn’t going to be a problem – but for SharePoint Online, Office 365 and Project Online unless you have single sign-on you will likely run into this.  I will be researching this more and may have some answers when I get to Part 2 and beyond – and I’ll certainly come back to this blog to update with any findings.

In Part 2 (and there may be a Part 3) I will cover the behavior with SharePoint 2010, and also look at the Sync to SharePoint Tasks – which can also suffer from this read-only issue.
0 Likes
Like
Share