Turn on suggestions
Auto-suggest helps you quickly narrow down your search results by suggesting possible matches as you type.
Showing results for
Show  only  | Search instead for
Did you mean:
Project 2013 and Project Server 2013: Language Packs
By


The language pack options for Project 2013 and Project Server 2013, and the upcoming Online version - currently in preview - are very similar to those that went before for both Project and Project Server, 2007 and 2010.  There is one additional language, Romanian, both for the client and the server.  For the client the options are practically identical – both in the installation where the client language pack is bundled with the Office and Visio as before, and in usage the layout and features are identical.  For the server the language pack works in much the same way – you install the bits on all servers in the farm for each language pack you want to support and then run the configuration wizard.  Like 2010 you can then decide which languages you want to make available for each site – but what is different for 2013 (and Online) is how the user ‘chooses’ which language they will see.  More detail on that further down the blog – first I’ll walk though the experience of loading a language pack on the client and server.

I will also be updating the blog with reference to download locations once they are available – currently I just see these in the MSDN download center and the preview versions for SharePoint Server 2013 on the Microsoft Download center.

For the client the when the executable is run you will first see a dialog like the following.  This one happens to be Russian – but whatever the language the Microsoft Project bit should be readable – and it will be the middle option. 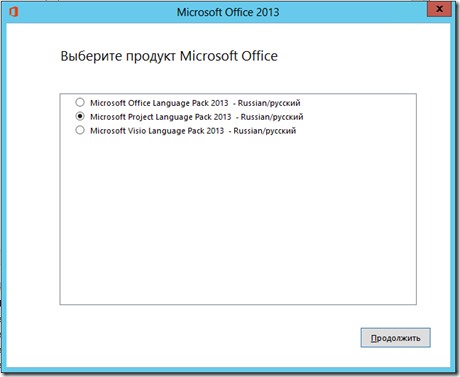 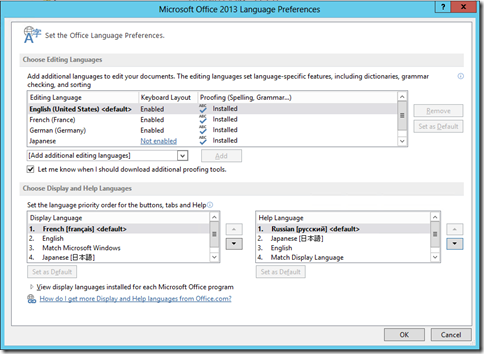 The top section still controls the editing languages, and the lower section – more applicable to Project UI controls the display and help languages.  So for example in this configuration Project will display in French, but if I bring up help this will be in Russian.  This can be useful where an organization uses a specific language for the UI and prefers everyone to do the same – for ease of support – but the user can choose a Help language that may be more familiar to them. 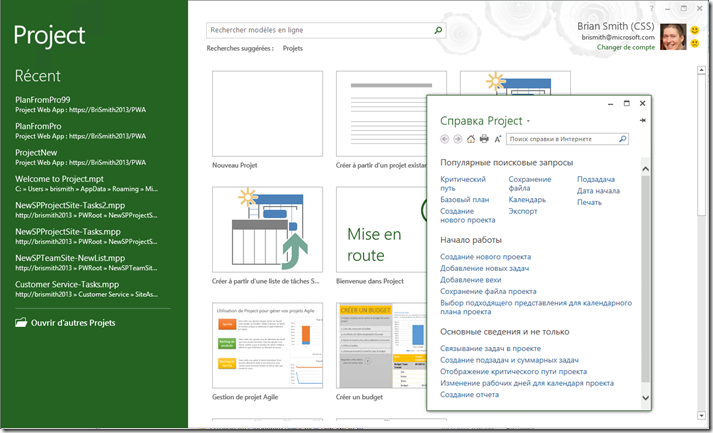 For the server the installation is similar to 2010, and like 2010 the Language packs are combinded for SharePoint and Project Server and the  – running the executable brings up the EULA, accepting and clicking continue (this example is the Romanian language pack) will install the bits. 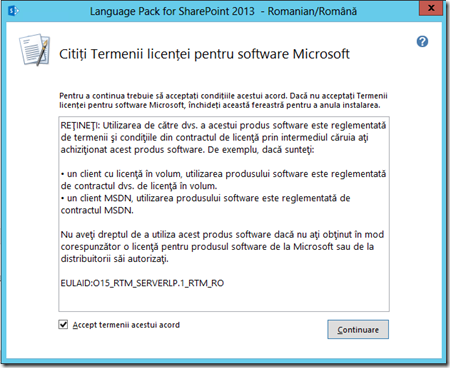 Once complete it will prompt to run the configuration wizard: 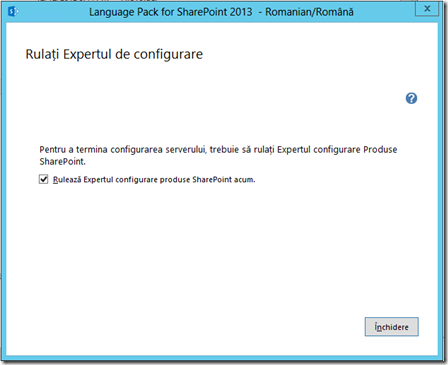 Back to the main story – the configuration wizard will go through 8 steps – the length of time it takes somewhat dependent on the volume of data you have (number of PWA instances for example) as it will be adding extra data to some of your tables, as well as laying down some extra web pages.  Once it has finished it should say Configuration Successful, and then to make the language you have added available you can go to Site Settings (from the gear in the top right corner of the screen) 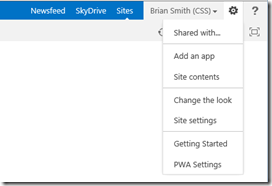 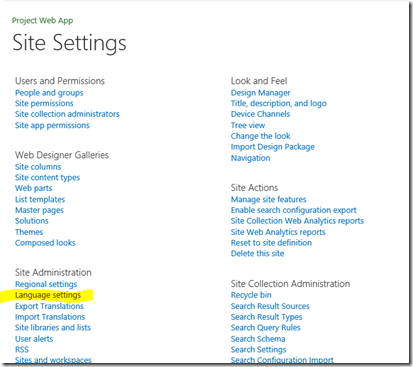 and I can put a check next to Romanian so that users can select as their display language. 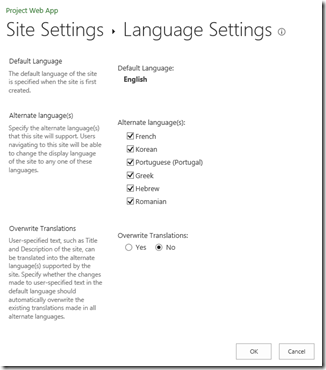 Here I have added Romanian and also moved it to the top of my list of display languages, then scrolled down to Save all and close. 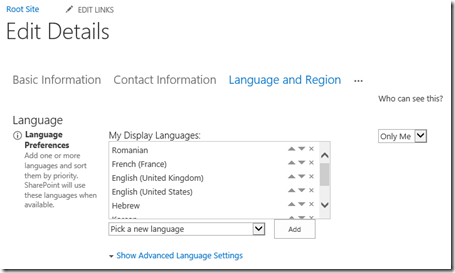 Here I get a message that the changes have been saved, but they may take some time to take effect.  Don’t worry if you don’t see them right away.  I say OK to this message an go back to the PWA site.

After a few minutes we have it – our PWA site in Romanian! 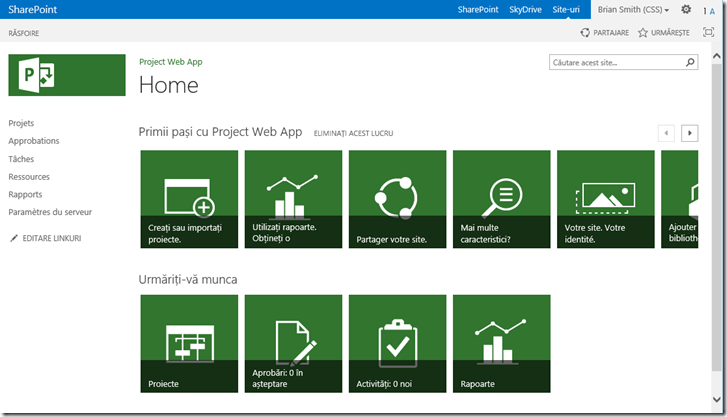 The full list of languages for Project Server 2013 is:

Currently looking at the Project Online preview I see you have the options to make the following languages available to your users.  I am not aware of current plans to extend this range.

Also with online the choosing of languages is slightly different currently (not sure if it will change as we move out of preview…) in that the Display language option is just a single language rather than a table of preferences – but it is also driven by the IE language preference.  So for example if my O365 Display Language is Spanish – but I have not made Spanish available for my PWA, and I have French set as my preferred IE language (and I have made French available for my PWA) then I will see my O365 pages in Spanish, but my PWA in French. 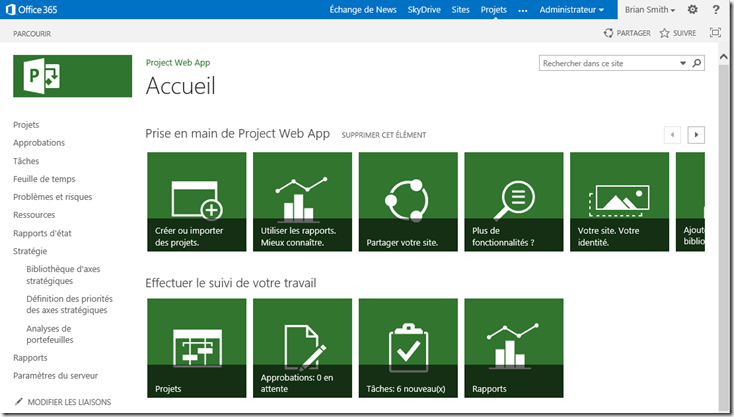 One final word of warning – if you are playing about with IE settings and you have Windows 8 – and you sync your settings between PCs then I’d suggest that whenever you set a new language in the IE settings that you also set the keyboard to the actual keyboard in front of you.  In my testing of Language Packs I made the mistake of setting the preferred language with the ‘local’ keyboard setting of a language other than English (and not with a QWERTY keyboard…) and I did this on my desktop machine.  Shortly afterwards I couldn’t understand why I’d lost my ability to type on my laptop – then realized that my laptop had also inherited these new settings! (And just got caught out again – my Windows Phone 8 app on my laptop has gone French…) 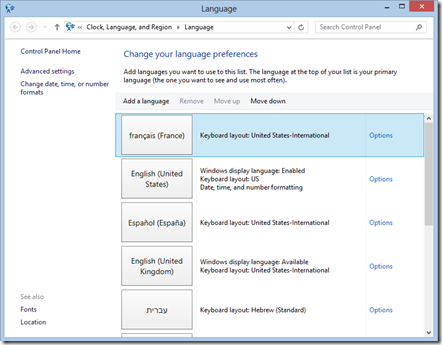